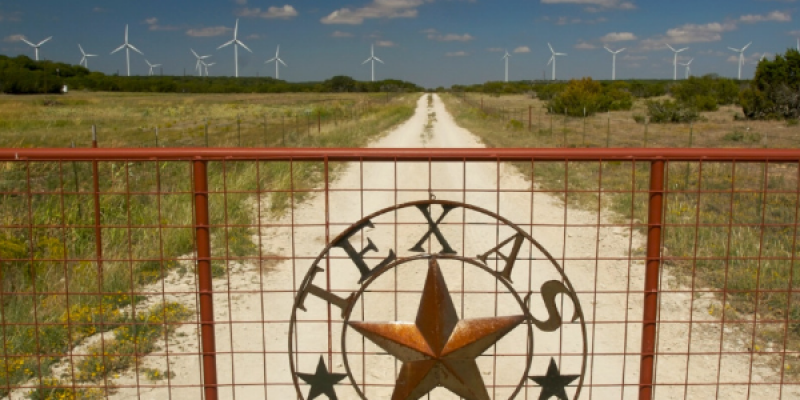 The state and some energy companies argue the implementation of wind energy from sparsely populated West Texas to the densely populated, higher energy using East Texas, was an unprecedented undertaking implemented by multiple stakeholders within a short timeframe.

If Texas were a country, its installed wind power capacity would be the sixth largest in the world.

According to the U.S. Department of Energy, only China, the United States, Germany, India and Spain produce more wind power than Texas’ installed wind capacity (16,000 MW).

Wind surpassed coal in generating electricity in 2017, according to the Electric Reliability Council of Texas (ERCOT), which manages the flow of electric power to more than 25 million Texas customers, or about 90 percent of the state’s electric load. ERCOT connects more than 46,500 miles of transmission lines and 650-plus generation units.

In 1999, the Texas Legislature passed Texas’ first major subsidy for renewable energy, the Renewable Energy Credit (REC) program, which mandated that Texans must use – and pay for – a certain amount of electricity produced by renewable sources.

In 2005, the Legislature required the state to increase the use of renewable energy, primarily in wind generation, in West Texas. It required the Public Utilities Commission of Texas (PUCT) to designate Competitive Renewable Energy Zones (CREZ) throughout the state.

Establishing 3,600 miles of wind power to generate 18,500 megawatts of wind power statewide equates to more than three times as much as any other state produces, ERCOT notes.

CREZ has been touted as a successful economic development project, an achieved “milestone,” that has been facilitated by a large fleet of flexible natural gas and combined-cycle generation. In 2018, ERCOT also implemented a system-wide dispatch at 5-minute intervals, “which lends itself well to regional planning,” it states.

The Texas Public Policy Foundation (TPPF) estimates that the total cost to taxpayers and consumers of subsidies going to renewable energy operators in Texas from 2006 to 2029 is $36 billion.

By 2029, Texas state and local subsidies expected to be paid to renewable energy companies will reach nearly $18 billion, the TPPF projects. This includes $14 billion in taxpayer money paid to CREZ transmission lines, $2.5 billion in 313 property tax abatements, $1 billion for grid interconnection costs, and $570 million for the Renewable Energy Credit program.

In 2008, the PUCT projected $4.93 billion in costs to consumers and taxpayers.

However, by 2015, based on calculations of peak costs and federal subsidies, Robert Bryce, a senior fellow at the Manhattan Institute, argued that wind-energy subsidies actually exceeded the wholesale price of electricity in the Texas market. In some years the subsidy was nearly three times the then-current market price of natural gas.

Since 2007, $176 billion the wind-energy sector, has received taxpayer funded federal and state subsidies, according to data from Subsidy Tracker, run by Good Jobs First. The Washington, D.C.–based organization claims it promotes “corporate and government accountability in economic development and smart growth for working families.”

About $6.8 billion in federal subsidies, loans and loan guarantees were given to foreign corporations, including Iberdrola, Siemens, and E.On, Subsidy Tracker found.

Interested in more news from Texas? We've got you covered! See More Texas News
Previous Article Leading New Jersey Democrat asks why DNC is supporting criminal illegal aliens [video]
Next Article Today’s Conservatives Are Either Based Or Boxed; Which Are You?