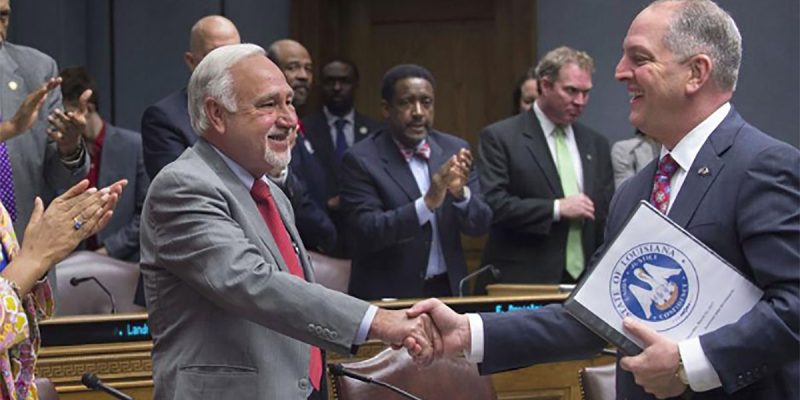 It’s an election year, which makes the political stakes all the higher when anything of note happens. That’s why the shooting last Thursday of Josef Richardson, a 38-year old black man, by a white West Baton Rouge Parish sheriff’s deputy could take on a lot larger import.

The autopsy of Richardson came back from the coroner yesterday, and the report concluded Richardson was shot in the back of the neck.

The gunshot severed part of 38-year-old Josef Richardson’s spinal cord and severely injured the base of his skull, the report from the West Baton Rouge Parish Coroner’s Office shows.

Richardson died at the scene.

Sheriff’s deputies had been serving a warrant Thursday at a Budget Motel 7 room near Port Allen when a deputy shot Richardson, according to State Police, which is reviewing the shooting.

The agency hasn’t said why the deputy, whose identity has not been released, fired his gun.

Family and residents have called for the swift release of any new information ahead of a Wednesday rally outside the West Baton Rouge Parish courthouse. The autopsy report, in which Richardson’s death is ruled a homicide, has also prompted more questions and demands for more details, said Ronald Haley Jr., the family’s attorney.

“This is an egregious situation,” Haley said. “When police execute a warrant, it should not be a death warrant.”

The Sheriff’s Office has declined to comment on the warrant that deputies had been serving, directing those questions to State Police. The warrant has not yet been made public.

An arrest warrant for Richardson’s girlfriend, Jessica Ellen Clouatre, 39, suggests the deadly encounter may have been related to a narcotics operation at the motel.

Today in West Baton Rouge the circus is coming to town. Benjamin Crump, whose name might be familiar given that he was Trayvon Martin’s attorney, has descended on the scene, meaning we’re going to have our usual racially-charged mess a la Ferguson or the Alton Sterling kerfuffle all over again.

But here’s where it gets interesting.

Because the racial aspect of this, at least where the politics of it will be involved, is a lot less interesting than the partisan aspects.

Well, let’s understand that there are essentially two places in South Louisiana which are still more or less run by white Democrats. One is Tangipahoa Parish, where Gov. John Bel Edwards is from and whose family has controlled the place for generations – so much so that he’s running a TV ad right now bragging about that fact.

The other is the strip across the Mississippi from Baton Rouge encompassed by Iberville, West Baton Rouge and Pointe Coupee Parishes.

As Chambers said, Mike Cazes is the sheriff of West Baton Rouge Parish. Mike Cazes is a Democrat who four years ago appeared in TV commercials backing John Bel Edwards.

Cazes has been a fairly popular figure in West Baton Rouge, but that doesn’t mean the sheriff’s department there, or Cazes himself, hasn’t had his troubles.

For example, there was the mess in April over Cazes hiring a sex offender inmate from the jail to help him put together a crib at his house, which got him an investigation from the state Department of Corrections.

Then in June there was the mess involving a former WBR sheriff’s deputy who killed a pedestrian in his car on La. Hwy 1, the main drag through the parish, and wasn’t arrested despite having an outstanding warrant. Cazes blamed poor communication for his department not knowing about the warrant even though WBRZ-TV found it in no time flat.

Then there was the mess last year involving Ben Arceneaux, a 10-year veteran of the WBR sheriff’s department who did a fairly convincing impression of Harvey Weinstein among the female population of the parish as he wielded the power of traffic tickets over them, and when caught was given only light discipline by Cazes. WBRZ blew that case wide open as well.

In other words, Mike Cazes’ troubles and those of his department are nobody’s particular responsibility to defend – not among Republicans, not among conservatives, and not among the pro-law enforcement crowd.

There are reasons Ascension and Livingston Parishes have been booming for two decades while across the river it’s as sleepy as it’s ever been, and here’s a good one. The same can be said about Tangipahoa Parish.

So if Benjamin Crump comes in and lights a racial bonfire over the Josef Richardson case, so be it. The circus may have come to town, but it isn’t our circus. Frankly, the real question here is why John Bel Edwards’ state police, which has been horrendously compromised in terms of ethics and integrity from the time he took office – starting with illegal campaign contributions made to Edwards through straw donors from the state trooper’s association and continuing through the Mike Edmundson travel and perks scandal – is in charge of investigating this case. This is probably much better suited to the feds becoming involved, and if Crump were to call for that we’d be very much in his corner.

It’s not that Josef Richardson was some ordinary guy minding his own business. It’s pretty clear he was a drug dealer and he’d have almost certainly spent a nice length of time in jail had he not been blown away in that motel room. But that’s not the point here. Chambers is almost never correct, but in this case he’s not wrong in noting that it’s a bad look for a suspect to be shot in the back of the neck.

We’ll wait to see the results of the investigation, but if it begins to look like Edwards is having his people cover for Cazes, all hell should break loose, and not just in the black community.

This is an election year, after all.

Interested in more national news? We've got you covered! See More National News
Previous Article SADOW: NW LA Taxpayers Set To Lose More On The Independence Bowl
Next Article Conaway Latest Congressman To Hang It Up: Does This Signal Disaster for GOP?