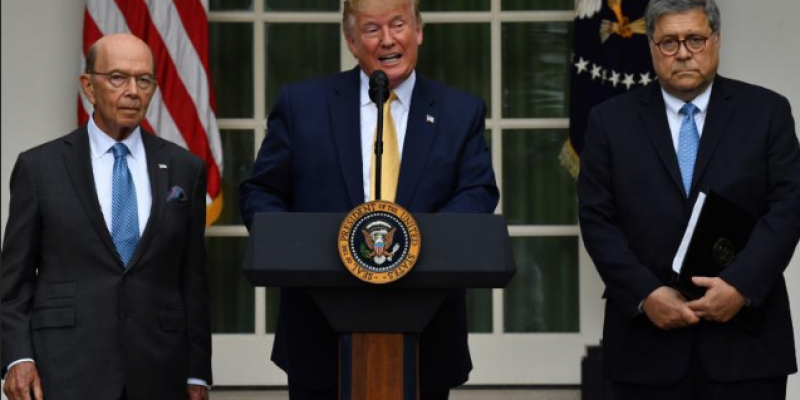 “We are not backing down,” he said.

The order requires every federal government agency “to provide the Department of Commerce with all requested records regarding the number of citizens and non-citizens in our country. They must furnish all legally accessible records in their possession immediately. We will use these databases to determine the number of non-citizens in the U.S.”

The order will enable the government to produce a more accurate count than a single question on the census, he said.

“The Census Bureau projected that using previously available records, it could determine citizenship for 90 percent of our population or more,” Trump said.

The Trump administration wanted to include a citizenship question on the 2020 Census, but a divided U.S. Supreme Court last month put a temporary halt to the plan.

“As a result of the order, we will be able to ensure that the 2020 census generates an accurate account of how many citizens, noncitizens and illegal aliens are in the United States,” Trump said, speaking for about six minutes in the White House Rose Garden and taking no questions.

Supreme Court Chief Justice John Roberts joined the court’s four liberal justices in blocking next year’s Census from including the question: “Are you a citizen of the United States of America?”

“The only ones who are not proud to be citizens are those who are fighting against us all the way,” he added.

Barr added that “the government has ample justification to inquire about citizenship status on the census.”

In light of three ongoing district court cases and injunctions in place that forbid adding the citizenship question to the census, he explained the impediment was logistical, not legal, pointing to the court’s affirmation of the question.

Roberts in the majority opinion said adding a citizenship question to the Census was reasonable, but the administration’s explanations for adding it didn’t match up with the evidence.

Opponents of the question said it would scare noncitizens from participating for fear of deportation. After oral arguments before the Supreme Court in April, they offered new evidence they claimed showed Republicans wanted the question added because it would give them an advantage in upcoming elections.

The evidence included information on the computer hard drive of the late conservative redistricting strategist Thomas Hofeller, a proponent of the citizenship question. After his death last year, Hofeller’s daughter turned the data over to Common Cause, a voting rights advocacy group.

Trump said the administration had run out of time to prove its case through the court system.

“There is no way to litigate the issues without jeopardizing the ability to carry out the census,” Barr said, which the administration does not want to do.

Interested in more national news? We've got you covered! See More National News
Previous Article Nothing like a White House scuffle in the Rose Garden [videos]
Next Article Is Microsoft Now About To Censor Your E-Mail And Other Speech?