…now that some of his fellow Congressional Black Caucus members have begun flying the coop on him. Richmond is now at odds with a group who have come out for Kamala Harris, for example…

Two more members of the Congressional Black Caucus are backing Kamala Harris’s bid for the presidency. Reps. Bobby Rush of Illinois and Frederica Wilson of Florida are supporting the California Democrat’s presidential bid.

Endorsements from the caucus, which counts more than 50 members, are shaping up to be very influential in the Democratic presidential primary. The pair of endorsements bring Harris’s total CBC endorsements to six.

Rush has been sharply critical of former Vice President Joe Biden in the wake of comments in which he recalled working alongside two segregationist Southern senators.

Rush told Politico that Biden, another Democratic presidential candidate, was “wholly out of touch and woefully ignorant of the nuances of the black American experience.” Rush will serve as Harris‘ Illinois campaign co-chair.

Not that being in the same camp as Bobby Rush is a particularly desirable circumstance, but if you’re Cedric Richmond and you’re on record as backing Biden, and then last month the low-candlepower former Vice President proceeded to brand himself as entirely out of step with the terminally “woke” nature of today’s Democrat Party by touting his friendly relationship with segregationist Dixiecrat senators of yore, and your caucus is lining up behind Harris – who in last week’s debates appeared to snatch the mantle of Shrill African-American Race-Hustler for herself – it would seem to put you at a bit of a disadvantage.

Sens. Kamala Harris and Elizabeth Warren have made steep gains after the first Democratic presidential debate, a new CNN poll conducted by SSRS. shows, with former Vice President Joe Biden’s lead over the field shrinking to a narrow 5 points.

The results indicate a significant tightening in the race for the Democratic nomination.

The poll, conducted after the two-night debate, finds 22% of registered voters who are Democrats or Democratic-leaning independents backing Biden for the party’s presidential nomination, 17% Harris, 15% Warren and 14% Sen. Bernie Sanders. No one else in the 23-person field tested hits 5%. 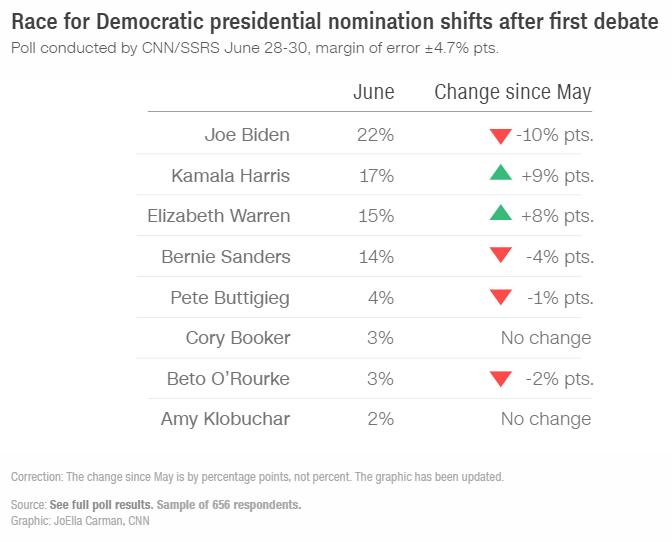 So here you have a black candidate running in second place just five points behind Biden, and she’s beginning to line up the CBC’s support, and Richmond is now on the opposite side of that.

And of course, he can’t really do anything about that, since he signed on as a national co-chair of Biden’s campaign – less than three weeks before Biden made himself out to be an Ancient White Racist whose opposition to forced school busing in the 1970’s is being called out by Harris as a telltale sign of how he really is.

“My biggest strength is offering political advice and using my political instincts to come up with strategy, and not just strategy in the African-American community,” Richmond said in the NYT interview. “I think the real strength is in the South and other parts of the country.”

Our theory is that before this campaign gets too far along Biden will have imploded, giving Richmond the opportunity to make his way as a free agent to either Cory Booker’s or Kamala Harris’ camps. But whether he pulls a plum title like National Co-Chairman with either, like he’s done with Biden, is very much up in the air.

Because others may well have beaten him to the punch.

And Biden’s history of ridiculously tone-deaf and moronic statements on race, considering that he’s a Democrat in 2019, will almost surely resurface. He’s been a gaffe-factory all his life. Richmond ignored that, thinking that he’d ingratiate himself with the Democrats’ establishment and maybe be in line for a cabinet job or an ambassadorship, and backed Biden over a pair of black candidates.

And it’s starting to look like that was a bad bet.

Watching Richmond squirm as Biden founders will make for interest sport in the next few months.