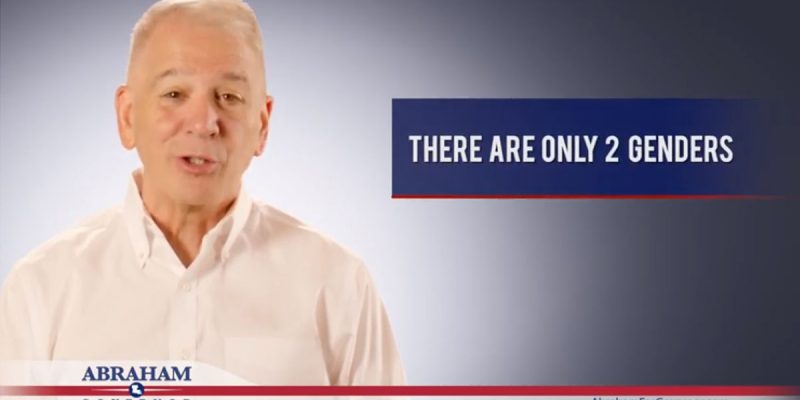 …maybe you ought to see this for yourself. To us it has the feel of calling Abraham on the carpet to discuss his “discriminatory beliefs” as expressed in the “two genders” ad which is getting so much play.

I spoke at-length with congressman Ralph Abraham about this campaign ad that's fired so many people up. Here's a snippet from our chat. See more tonight at 6 on @WAFB. #LaLege #LaGov pic.twitter.com/yskNjFd12Y

And the WAFB report, which has different quotes from Abraham together with the station’s take on the “two genders” ad and the controversy it generated…

In the commercial, Abraham makes eight statements that he calls “the truth,” though not all viewers will recognize each of the statements as fact.

“As a doctor, I can assure you there are only two genders,” the congressman says at the ad’s conclusion.

“[Politicians] are very good at deflecting and avoiding direct questions and direct issues,” Abraham told WAFB. “I’m not that guy. You ask me a direct question, I’m going to give you a direct answer.”

In the ad, Abraham asserts that “life begins at conception, government is too big, our taxes are too high, and our car insurance is too expensive. President Trump is doing a great job, facts matter more than feelings, the second amendment is self-explanatory.”

Abraham says he will treat members of the LGBTQ community “as fair as anybody else in the world,” and says his argument is rooted in disgust with Louisiana’s high insurance rates.

The idea, Abraham says, is that anti-discrimination measures, like an executive order Gov. John Bel Edwards issued years ago that was later struck down, create more opportunities for workers to sue their employers.

As Election Day nears, Republicans have repeatedly attempted to make the state’s legal climate a hot button issue. Because Louisianans are sued more frequently than people in other states, Republicans contend insurance companies charge higher rates to cover their losses.

Naturally, Channel 9 found someone to lecture us all about how Abraham’s spot robs the transgender crowd of their safe spaces…

Louisiana Trans Advocates President Dylan Waguespack says the evidence suggests anti-discrimination laws do not lead to more lawsuits. He argues the ad is “dehumanizing” and out of touch, citing polling from Just Win Research that indicates most Louisianans support protections against discrimination for LGBTQ workers.

“Words matter. Ralph Abraham might not have the high profile that he wishes he did, but he’s still a congressman and a candidate for governor,” Waguespack said. “His words carry weight, and he has the responsibility to use them wisely.”

Waguespack says he doubts whether Abraham could govern with the LGBTQ population’s best interests in mind based on the message he says his latest ad conveys.

“It sends a very clear signal to the people in the trans community and our allies, the LGBT community at-large, that this is someone who’s not planning on doing the work of being governor for all the people,” Waguespack said.

“I have not one discriminatory bone in my body,” Abraham said, defending his capacity for fairness. “This is not about that at all. This is about lawsuits.”

Abraham came off all right in the report, we guess, though he did seem a little nervous in the interview – like he wasn’t comfortable being in the center of this controversy. Whether voters pick up on that we’re not sure. It’s advisable, of course, that if you’re going to deliberately stoke a fight like this, particularly over an issue better than three quarters of Louisianans are going to agree with you on, that you handle it with swagger the way, say, President Trump does. Abraham isn’t quite there, though he does manage to get his point across.

What’s obvious, though, and if Abraham looks a little nervous this is a valid reason, is WAFB “doesn’t approve” of Abraham’s ad. You can tell that from Elizabeth Vowell’s sourpuss face in the open and the patronizing question Houston hits him with about whether he can be “fair” toward transpeople. That treatment is probably more noteworthy than anything Abraham says in defense of the spot.

Which leads us to close with this: seeing as though Dylan Waguespack was one of the former staffers in the Bel Edwards administration who accused his former deputy chief of staff Johnny Anderson of sexual harassment (Anderson apparently didn’t buy Waguespack’s transition from female to male and thus thought she was fair game for his advances), it would seem like Abraham has something of a low bar to clear in providing a safe environment for the transgendered crowd on the Fourth Floor of the State Capitol. How come nobody asked Waguespack about that in the Channel 9 report?

Interested in more national news? We've got you covered! See More National News
Previous Article Purdue Pharma, Sackler family, allegedly proposed up to $12 billion to settle thousands of opioid claims
Next Article DONAHUE: I Think I See A Light At The End Of Louisiana’s Judicial-Hellhole Tunnel