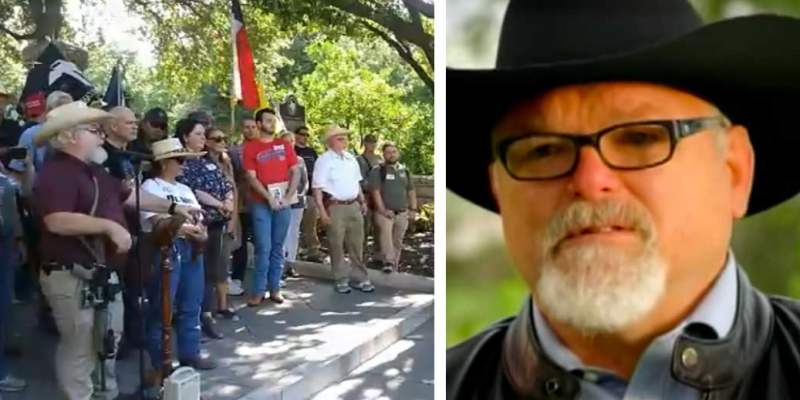 AUSTIN — Honoring “the sheepdogs of your community,” Sutherland Springs hero Stephen Willeford was the keynote speaker at a pro-Second Amendment rally and open-carry walk held at the south gate of Texas Capitol.

The occasion: Texas Gov. Greg Abbott this morning convened the first meeting of the Texas Safety Commission to find ways to prevent mass shootings such as the one in Sutherland Springs and recently in El Paso. This on top of the Domestic Terrorism Task Force announced last week.

A list of participants did not originally contain any pro-Second Amendment advocates, though a representative from the Texas State Rifle Association was later added.

“The State of Texas will not relent in its effort to help the El Paso community heal and keep all Texans safe,” Abbott said in a press release. “The Texas Safety Commission will bring together experts and community leaders to develop an action plan to combat threats of domestic terrorism, root out extremist ideologies, and address the link between mental health challenges and gun violence in our communities. By working together, we will we ensure a safe and secure future for all Texans.”

The inaugural roundtable meeting is closed to the public.

Gun Owners of America of Texas, which hosted the event at the Texas Capitol, is concerned that previously proposed “red flag laws” and mental health profiling could restrict Second Amendment freedoms, and that without the Fourth Amendment’s guarantee of Due Process. A similar roundtable set by the Governor following the Santa Fe, Texas, massacre led to mental health reforms in the recently concluded legislative session.

“Gun owners are done,” Willeford said. “We don’t want any more restrictions. Gun restrictions do not stop the bad guys.”

In his speech, Willeford said he is “no more different than anyone up here,” pointing to the 40 persons standing behind a music stand doubling as a lectern for the press conference.

On Nov. 5, 2017, Willeford, who had taken cover behind a truck outside the Sutherland Springs Baptist Church building, shot the shooter with his AR-15 rifle, hitting the killer in the leg and upper left torso underneath tactical shielding. The shooter dropped his rifle and fired back with a handgun, fleeing in a Ford Explorer. Willeford fired another round before joining neighbor Johnnie Langendorff in vehicular pursuit of the shooter for several minutes up to near 100 miles per hour. The shooter veered off the road due to bleeding injuries and died in his Explorer.

“We as gun owners in this nation have our backs against the wall. We keep giving and giving, but nothing stops a bad guy from getting a gun,” Willeford said. “… When I ran across the street and faced a shooter that murdered 26 of my community members and friends, the difference was good versus evil. That man was evil, and there was no denying that.”

A protester chimed in following the body of Willeford’s speech, and a failed attempt at a “USA-USA” chant. The protester insisted guns and access to them must be restricted. “… There are more guns in the United States than anywhere in the world,” he said. He repeatedly asked “do I have to live that way?” assuming the proliferation of guns equals an increase in violence and mass killings.

“Because that’s the world we live in today,” was one of Willeford’s replies.

Willeford added that it takes five to seven minutes for police to arrive in a community such as Sutherland Springs. The protester countered that it took 30 seconds for the Dayton, Ohio, shooter to kill nine people.

Willeford continued to speak the protester after the event, until a question about abortion frustrated the protester and he left. Other protesters quietly held signs — one of whom was topless.

“Please give more airtime to the stories of heroes who save lives … and don’t bother giving airtime to despicable murderers,” Rachel Malone of Gun Owners of America urged the members of the press.

A video taken of the event (with some commentary) may be found here.