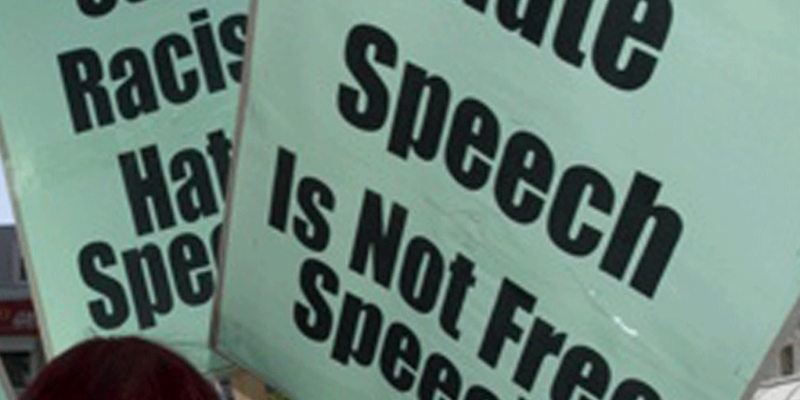 Hate speech is not “free speech” and is not protected by the U.S. Constitution. In fact, the Constitution protects victims from those who commit hate crimes, which includes hate speech.

Threats to kill Donald Trump can be considered hate speech depending on the context. Regardless of why he is being targeted (ideological and political beliefs, race or gender) direct threats of violence against him are investigated by several federal law enforcement agencies because he is the president.

But what about people who aren’t the president?

Someone posting on social media that they hope another person rots in hell or dies a violent death is not hate speech. The latter might be considered a threat of violence or intent to harm, which is illegal.

Suggesting that murderers receive the death penalty is not hate speech, nor is it inciting violence, or “hateful messaging.”

“Offending” someone by posting an article about False Flag events is not hate speech, nor is it inciting violence, or “hateful messaging.”

Holding up a severed head of President Trump and posting it on social media is hate speech because it incites violence and/or depicts an already violent act committed by the perpetrator who also expressly stated her hatred for the president.

Again, hating someone is not a crime. Feelings are not illegal. Acting on them in violence most often is.

Threatening to harm someone and their children (ie recent threats made against NRA spokeswoman Dana Loesch and her children) is not protected speech. It is a hate crime because she is being expressly targeted because of her political beliefs (support of Second Amendment).

In 1969 the Supreme Court added three conditions to the Holmes argument for restricting speech; the speech in question must have 1) the intent and 2) the likelihood of causing 3) imminent violence. Inciting the intent to kill police officers, involving direct encouragements for others to commit crimes and to commit them “now,” all meet the three-prong criteria.

Depending on the terminology, speech that incites violence, such as those made by Maxine Waters and AOC, among others are not constitutionally protected. Numerous reports linked AOC’s inaccurate remarks about detention centers to the crime one man committed shortly thereafter at a facility in Arizona who cited her words. Her false claims, many argued, led to an act of violence and death of the perpetrator. Other reports published Waters’ comments recorded on video inciting violence against Republicans, which were then later linked to acts of violence committed by Antifa shortly thereafter. Teenagers wearing MAGA hats were attacked, as were black and Latino Americans.

Violent words and inciting violence can, and often does, lead to violence, which is precisely why it is not protected speech. At issue is to what extent such crimes will be enforced in an age when everyone seems to be offended by everything and won’t engage in discussion or debate to actually learn something. Instead, their arrogance leads them to make false accusations or threats, which could be easily avoidable– and is preventable.