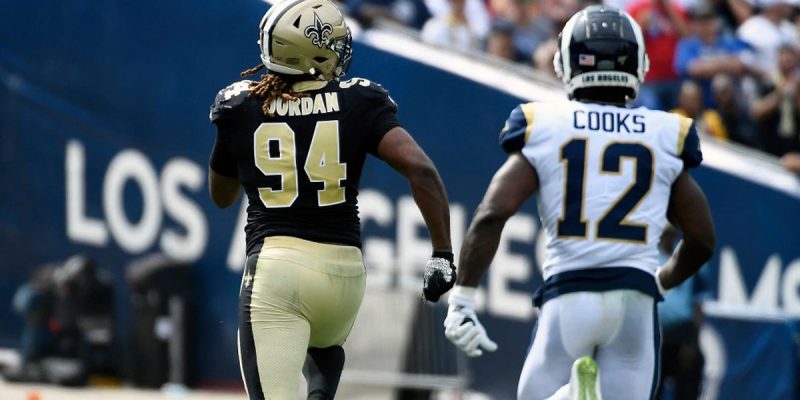 The key moment that decided yesterday’s Saints-Rams NFL game was when New Orleans Saints Quarterback Drew Brees injured the thumb on his throwing hand as it collided with the hand of Los Angeles Rams defensive tackle Aaron Donald.

Take number Nine out the huddle and you’re playing with cement cleats as we saw during the balance of the cringe-worthy game as the sputtering offense was unable to do anything beyond position the ball within kicker Wil Lutz’s long field goal range.

However, the horrendous officiating throughout the game didn’t help and when not keeping the Rams offense on the field by no-calling egregious holding on Saints defensive end Cameron Jordan they were screwing Cam in another big way invalidating an impressive fumble recovery for a touchdown.

The refs managed to mess that single play up twice, originally ruling it an incomplete pass (in what non-Matrix world do quarterbacks pass footballs sideways?) and then after video replay clearly betrayed their ineptitude to the football world, negated the runback which remained an active play in every sense..

And if you don’t believe me look at the flock of white jerseys chasing Jordan 87-yards up field.

It was a definite momentum shift and would have given the Saints a lead going into the second-half. Instead, it was the latest morale sapping same-old, same-old from the zebras.

Even the most passionate Who Dat knows that nobody is perfect but nobody can be this imperfect in three consecutive games that count.

To say the Saints “can’t catch a break” is far too charitable in light of the blatant targeting in the NFC Championship game last season and the officiating crews inability to process simple arithmetic and comprehend the rules of the game.

The referees are paid very well. Yes they’re not full-time employees, but they’re making a lot more than the kids working at Casey’s Snowball stand in Metairie.

Forget the rule change that the league adopted in the off-season to “compensate” for New Orleans being robbed of a Super Bowl appearance.

That was a PR stunt not a reform and is not real accountability.

Suspending and firing referees is.

And until that happens football fans will continue to see games affected if not determined by incompetent referees. For whatever reason, Saints fans have witnessed an agonizingly disproportionate share of this garbage.

I don’t fully blame the referees for the loss on Sunday.

I do blame Commissioner Roger Goodell for the total loss of confidence in the integrity of the game.