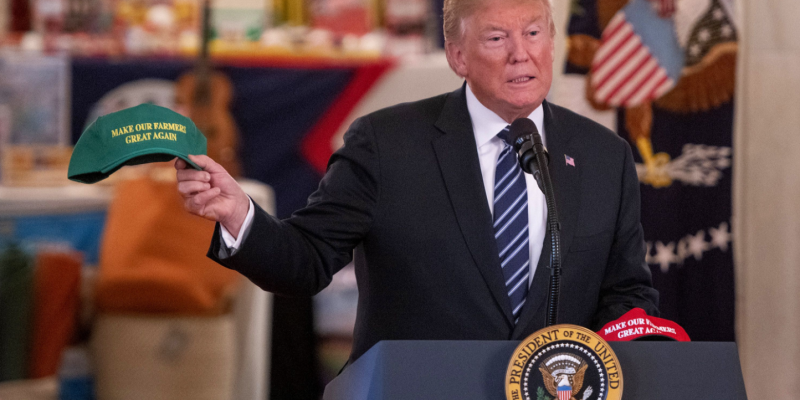 The Senate Majority Leader moved last week to take up the House-passed appropriations bill and Senate Democrats fought the motion.

“If there’s any House bills the Senate has a responsibility to take up, to debate, and amend, it’s the annual spending bill to keep government operating,” Sen. Grassley, R-Iowa, said on the Senate floor Thursday.

“We’ve got to fund the government and that’s what we’re doing,” he said.

The Senate sought to package four out of 12 bills together to save time. The four-bill package combined the Senate versions of the Defense, Labor-HHS-Education, State-Foreign Operations, and Energy-Water bills. Democrats opposed the package because they oppose a provision in the defense bill that diverts $3.6 billion from military construction projects to finance constructing part of the wall along the southern border.

Included in the funding is the two-year pledge of $28 billion to fund the Market Facilitation Program (MFP), created to aid farmers and ranchers impacted by retaliatory tariffs through the Commodity Credit Corporation program (CCC).

The CCC program, administered by the U.S. Department of Agriculture (USDA), is expected to hit its $30 billion borrowing cap by Sept. 30. The Trump administration asked Congress to increase it in order to continue aiding farmers and ranchers.

The administration warned Congress that if it does not provide additional funding in time, the CCC “would have to stop making payments … posing a serious risk for the farmers and ranchers supported by these programs.”

The stopgap measure would extend funding through Nov. 21, and would need to be revisited again.

“As members of Congress who represent agricultural communities, we repeatedly hear from farmers in our districts whose livelihoods have been severely impacted by the ongoing trade wars,” Peterson, Vela and Costa said in a joint statement.

“Although we mutually have concerns with President Trump’s approach to trade negotiations, we refuse to engage in the same tactics that punish our constituents and harm our communities that rely on agriculture,” they added. “The upcoming CR should include the anomaly requested by USDA that would allow them to access the $30 billion in spending of the Commodity Credit Corporation prior to October 1 to ensure that MFP and farm bill payments continue to go out. We cannot and will not allow our farmers to be used as political pawns.”

Rep. Rosa DeLauro, D-New York, sent a letter to USDA Secretary Sonny Perdue requesting details on the “unprecedented and unlimited use of funds” spent through the CCC. DeLauro says the $28 billion in MFP payments is larger than the entire discretionary budget Congress appropriates to the USDA every fiscal year.

“To date, we only know a small fraction of where this has gone,” she wrote. “We do know, for example, the corrupt, foreign-owned meat processor JBS has received approximately $90 million and fifteen advisors to President Trump’s 2016 presidential campaign have received at least $2.2 million.”

Referring to the Brazilian-owned JBS, among others, DeLauro argues, “American farmers deserve transparency and to know these payments are going to them and not corporate agribusinesses.”

Despite her objections, the House-passed bill included authority to fund the CCC.

According to a brief just released by the nonpartisan Congressional Research Service, “Without the anomaly in FY2020, CCC would still receive its appropriation under a CR, but it would be one to two months after enactment, which could potentially delay CCC-funded programming, including the Trump administration’s trade assistance to farmers affected by tariffs and 2018 farm bill payments.”

This is a revised article that was first published by The Center Square.