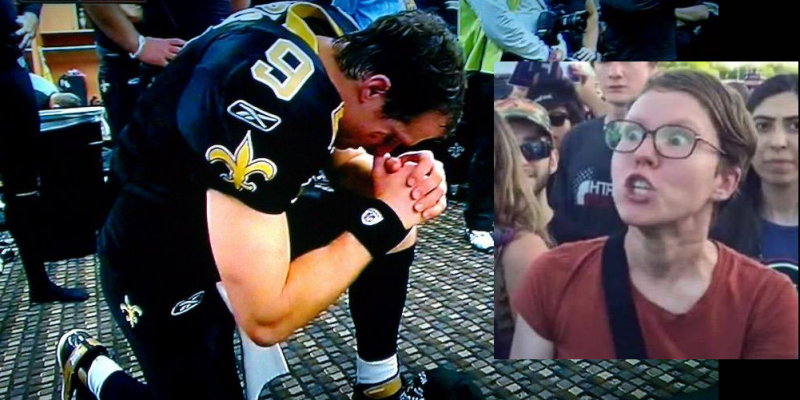 Famed New Orleans quarterback Drew Brees filmed a video for National Bring Your Bible To School Day, which normally doesn’t raise as much as an eyebrow when other celebrities endorse the event.

But with football season upon us, Brees has become the focus of an interesting running play by the radical alphabet-soup gay rights movement with a sweep from the mainstream media.

Bring Your Bible To School Day is the brainchild of Focus on the Family, a Christian organization which offers helpful advice and spiritual growth opportunities to families. Go ahead and take a watch of Brees’s endorsement of it before you read the rest of this article:

Join Drew Brees as he encourages students to “live your faith and share God’s love” on #BringYourBible to School Day, Oct. 3. Click below to learn how your voice can be counted.

Focus on the Family is a conservative Christian organization — about as bread-and-butter as it gets when it comes to their Evangelical approach to teaching Bible-based principles. Very little is said on their famed, four-decades-running radio program of homosexuality — most of the advice is along the lines how to honor your spouse with weekly date nights or how much time is too much when it comes to your kids and online video games. That kind of thing.

But leave it to the mainstream media to call Focus primarily an “anti-LGBTQ organization” (or some variant) — thus, by cooperation, Brees is a “homophobe.”

Brees told reporters he was unaware that Focus on the Family had ever suggested that a person can go from gay to straight with the help of the Architect of all human life.

The astroturf backlash became so bad that Brees issued a video statement clarifying his stance. “I do not support any groups that discriminate,” Brees said in his filmed reply. Watch the video reply below:

Hopefully this sets the record straight with who I am and what I stand for. Love, Respect, and Accept ALL. I encourage you not to believe the negativity you read that says differently. It’s simply not true. Have a great day. pic.twitter.com/4RdTahE7EZ

Summarizing the Law of God (“love the Lord with all your heart, with all your soul, and all your strength, and love your neighbor as yourself”), Brees explained that he does not withhold that mandate to love from anyone. Period.

The story here should not be that Brees is on trial for whether or not he committed the “sin” of cooperating with a supposedly anti-gay ministry. If it were about Brees’s faith, the mainstream media would have a LOT of work to do in unraveling the right-of-center leanings of many of the NFL’s most prominent stars. That rabbit hole goes pretty deep, as locker room faith is about as common as jailhouse religion.

Rather, the story here should be how the radical gay storm front convinced mainstream media reporters, editors, and headline writers to parrot the line that well-respected Focus on the Family is somehow a rabidly offensive hate group — one that took down Brees’s video in support of Bring Your Bible To School Day at the first sign of trouble, it should be noted.

By the way, Bring Your Bible To School Day is Oct. 3. The Hayride encourages students of all religious faiths to bring a Bible to school in solidarity with Brees and in support of free speech. (Psst! They can’t stop you!)