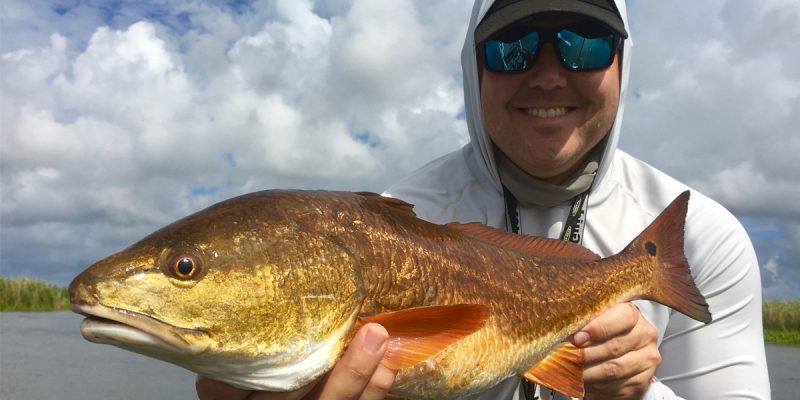 Chad Harvey has been fishing all of his life, but less than a decade ago, the Chauvin native took his first trip into the marsh while standing on a cooler, hoping to see line-stripping redfish swimming in ponds that were barely deeper than the fish were tall. The venture was successful, and Harvey was instantly hooked harder than any of the redfish he caught that day.

Since then, he’s sharpened his skills and has become a mainstay on leaderboards in South Louisiana redfish tournaments, some of which offer prizes of $50,000 or more. But Harvey seldom fishes those events without spending more hours than he’d admit to his wife scouting and looking for really fat fish that fall below the 27-inch maximum size limit.

I tagged along with him on one of those recent adventures. Harvey hadn’t fished near the mouth of the Mississippi River in several months, so he hitched up his small aluminum Gator Tail boat with a surface-drive motor, towed it down to Venice and slogged his way into a series of ponds on the west side of the river.

To give himself a better view radius, he climbed onto a 52-inch-high platform, and proceeded to blaze across shorelines, looking for just the right fish that would put him atop the field in an upcoming tournament.

To see how we did and learn some of Harvey’s tactics for finding schools of redfish, check out the video below.

Like the video? Please give it a thumbs-up, and subscribe to the Marsh Man Masson channel on YouTube. Also, leave a comment below or on the YouTube page. Have you ever fished a redfish tournament? If so, what did you like/not like about it? If not, do you plan to fish any in the future?