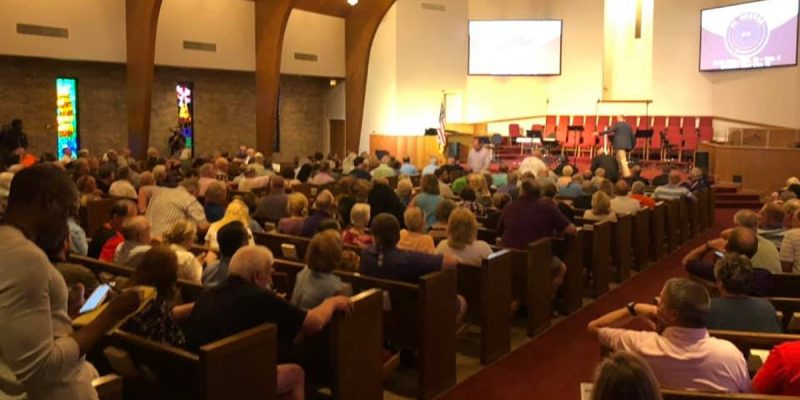 Last night the organizers of the St. George incorporation effort in southern East Baton Rouge Parish held a packed-house event at Woodlawn Baptist Church as a kickoff rally for the referendum on whether to create the new city October 12.

One of the most controversial items voters in East Baton Rouge Parish will see on their ballot in October is the proposed City of St. George, and it drew a big crowd Thursday night.

Supporters of the movement tried to make their case to voters during a campaign rally, while opponents tried to get answers.

Inside Woodlawn Baptist Church (which is not endorsing a side in this matter), supporters of the St. George movement made their voices heard Thursday night.

“And what we’re about to do October the 12th, it will be the largest incorporation in the history of this state,” said Chris Rials, vice chairman of the St. George petition.

Many in attendance were in support of the roughly 80,000 people who live in the area becoming new citizens of the City of St. George, using fewer parish services, and creating a whole new school district.

“It is exciting to become a new city, the fifth largest city in the State of Louisiana, and all the possibilities of what it will bring to our citizens, our community, the diversiveness of our children going to school,” said Darryl Tate, a citizen who attended the rally.

Officials with the movement to create the City of St. George say they’re really modeling what the City of Central did. They want to create a small, streamlined government that listens to the voice of the people. However, some who attended are still on the fence.

“I do worry about the constituents that would be living in a less deprived area, so my concern would be for the whole population of East Baton Rouge Parish, which I love. I’m also concerned about the school system. I’m actually hearing that even though we’ve come to two different cities, that it will take three to five years for the school system to actually come to fruition and I don’t know what the process would look like,” said Mary Dudley, another citizen.

Ads sent out recently against the movement say if St. George becomes its own city, services will not be the same.

The organization, One Baton Rouge, which is against St. George becoming its own city commented.

“Citizens are likely to hear more mythical, made up budget figures that are in no way sustainable without raising taxes on the citizens,” said One Baton Rouge in a statement.

“Will taxes be raised? Bottom line, will they be raised?” questioned WAFB’s Lester Duhé.

“No, they don’t have to be. It’s not a revenue problem, its a spending problem. St. George is going to correct that problem by privatizing with public private partnerships where it makes sense. We’re also going to spend our tax dollars wisely and not throw them away and waste them, as has been done previously,” said Andrew Murell, spokesperson for the City of St. George.

The mailer that has everybody in St. George so torqued up was this item…

And then, on the inside of this four-page missive, an explanation… 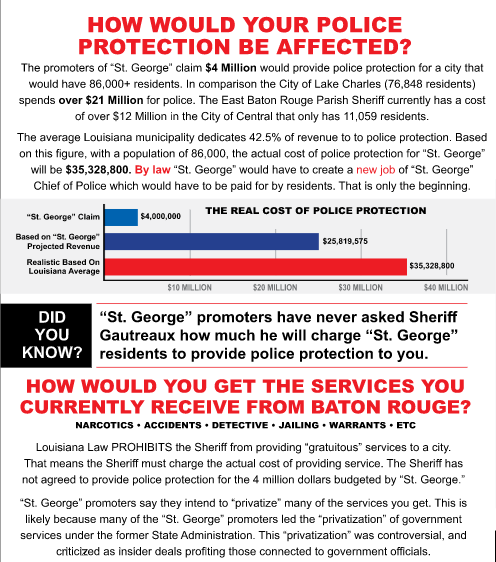 They’re right to be incensed, as the mailer was grossly dishonest. It insinuates, loudly, that St. George won’t get police protection from the East Baton Rouge Sheriff’s Office if it incorporates, and that’s a lie. Again, the area that would become St. George is currently an unincorporated area protected by EBRSO, and none of that changes in the event the voters opt to create the new city.

The numbers the piece spews purporting to estimate the cost of police protection don’t reflect the fact that EBRSO is already spending money, paid for by current tax dollars, to provide police protection. The $4 million estimate St. George provided was for a nominal increase in the cost of protection EBRSO already provides, perhaps with an increase in service. The Louisiana constitution requires that an incorporated city carry a police chief on its payroll, but not that such a city has to provide a full-fledged police force.

What could be at issue is whether St. George, once incorporated, contracts with EBRSO for greater police protection than people living there currently receive, and whether the price for that increased protection is such that taxes would have to be raised to meet it.

But that wouldn’t happen unless the voters in St. George ratified it. To suggest that anybody in St. George would lose their current level of police protection if it incorporated is a flat-out lie. As is the statement that the city of Central, whose incorporation has been more or less a model for the St. George organizers, has a population of 11,000. Central’s population is 29,000. That’s a very easily verifiable fact; it’s quite suspicious that it would be so sloppily botched.

So who’s pushing that false narrative? Who paid for the mailer?

Well, that’s an easy one. The mailer carries this disclaimer at the bottom of its back cover…

Put Louisiana First, which also posted a PDF copy of the mailer on its Facebook page, is Richard Lipsey’s vanity political arm and the platform from which he’s attacked LSU President F. King Alexander (which has been entertaining) and defended John Bel Edwards (which has not). Lipsey is fanatically anti-St. George, though we’re not really sure why, and he has Baton Rouge political consultant John Mathis, who at one point was Rob Maness’ campaign manager and worked on the Roy Moore senatorial disaster in Alabama, doing his anti-St. George work.

There are a number of problems with this, among them being that Put Louisiana First is not, as far as we can tell, registered with the Louisiana Board of Ethics and as such isn’t supposed to be engaging in political campaign activity. The anti-St. George mailer, its disclaimer aside, is quite clearly a political campaign piece advocating a particular side of a ballot issue, and it’s inconceivable the Board of Ethics would find this piece outside its purview.

We don’t have any poll numbers as yet on how the St. George vote will go, but we do have lots of anecdotal information suggesting it’s likely to pass overwhelmingly. The optics of the anti-St. George crowd’s actions almost play as though they want it to pass. For example, there was the scheduled televised debate on St. George which was canceled after mayor-president Sharon Weston Broome, who is reputed to be the leader of the anti-St. George effort, refused to participate and St. George organizers Drew Murrell and Chris Rials were to be matched up with M.E. Cormier, a magnet-school mom living outside the St. George area who is the spokesperson for an anti-St. George group called Better Together.

Murrell said there was zero reason for him to waste his time debating Cormier, as she neither works for the city-parish nor lives in St. George and therefore has no standing to engage in that debate. He’s correct.

What we’d like to see is a debate between Murrell and Lipsey, seeing as though as least Lipsey has put some skin in the game by spending his own money on trying to stop St. George. That might just happen if enough of the recipients of Lipsey’s mailers begin sending them back to his personal address, as some of the St. George advocates have been suggesting via social media.