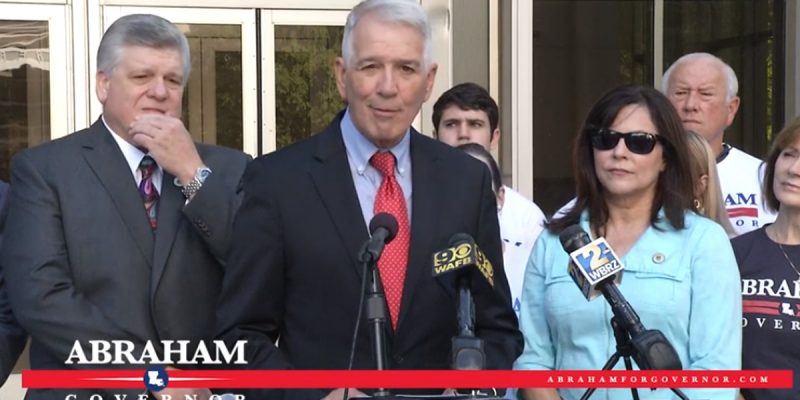 …the way Ralph Abraham did yesterday. To date, the subject of Medicaid hasn’t really been touched despite it containing a wealth of material with which to indict John Bel Edwards for malfeasance and incompetence.

Abraham showed up at the headquarters of the Louisiana Department of Health and demanded that Rebekah Gee, the head of that department who has been a rolling disaster since Bel Edwards appointed her and then gave her a budget of better than $15 billion a year, be fired.

But that wasn’t all he said. Here’s video…

We’ve wanted to see this for a while, because the media narrative has been that Bel Edwards’ expansion of Medicaid in Louisiana was this amazing stroke of genius and such a life-saver for countless people. Every bit of that is a crock, and Louisiana’s newspapers and TV stations have swallowed and regurgitated it for going on four years now without even qualifying it much when obvious facts came to light about what a waste of money it’s been.

Edwards has put close to 500,000 additional people on the Medicaid rolls since taking office. That’s better than 10 percent of the state’s total population. His administration has made the argument that these are people who didn’t have health insurance and therefore lacked access to the state’s health care system, which has never been true – Louisiana’s hospitals treat uninsured people every day, as do hospitals across the country. And in fact it’s been shown there is no discernible difference in outcomes between being on Medicaid and being uninsured.

Why is that? Because the vast majority of doctors don’t take Medicaid patients, on account of the fact the bureaucratic paperwork and reimbursement rates a doctor gets out of treating Medicaid patients aren’t competitive. So if you’re on Medicaid, chances are you’re going to end up in the emergency room just like you would if you were uninsured.

The difference is that if you’re uninsured you spend a lot more time at CVS or Walgreen’s than you do at the ER, because you don’t want to run up a big medical bill unless it’s absolutely necessary. But if you’re on Medicaid, there isn’t even so much as a co-pay for that ER visit – so you go all the time for things which don’t come close to an emergency.

Ask a doctor or nurse who works in an ER. They’ll confirm this.

So what Bel Edwards has done is to take an unknown number of people who were previously on private health insurance – we’ve seen an estimate of more than 200,000 of his 500,000 Medicaid expansion patients who previously had Blue Cross or some other coverage – and put them on the government dole. That sticks the hospitals with a crappy reimbursement rate while at the same time blowing up the state’s budget needlessly.

Meanwhile, and Abraham didn’t get to this, Medicaid has a provision whereby a state could offer premium support to people with private health insurance that’s a little beyond their means – which is a whole lot less expensive for the state’s budget and provides a whole lot better product to the insured. Guess how many people are on this plan in Louisiana?

About 1,000. While Bel Edwards put a half-million people on straight-up Soviet-style Medicaid, a good 10 percent of which weren’t even eligible.

So yesterday Abraham called the governor and his Secretary of Health out for the waste and the incompetence, throwing in the Centene Management scandal as a cherry on top.

And Matthew Boyle from Breitbart, who’s in Louisiana this week covering the Abraham campaign, covered it. The Baton Rouge Advocate did not.

So the next time you read in the Advocate that the candidates aren’t addressing the real issues of state government in this campaign, just remember that paper wouldn’t shut up about Abraham running an ad in which he said there are only two genders but had nothing whatsoever to say when he showed up at LDH and burned Bel Edwards to the ground over the waste involving half Louisiana’s budget. Then you can ask yourself where Louisiana’s real problem is.