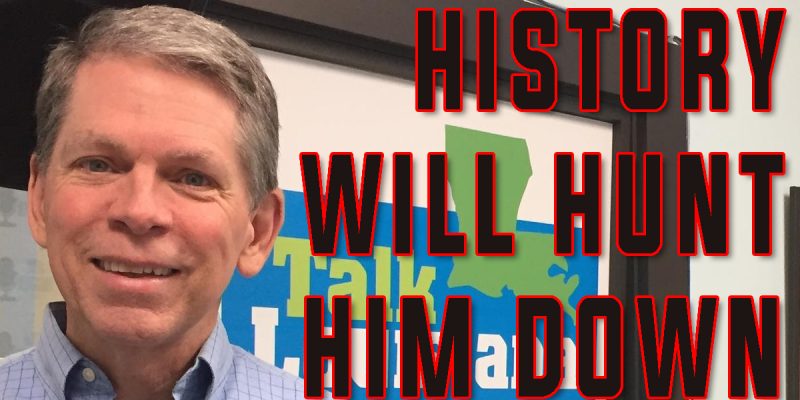 This will be an awfully short post, because what we’re about to show you from the twitter account of Bob Mann, insane left-wing hack, washed-up Democrat spin doctor and LSU journalism professor, speaks more or less for itself.

History will hunt him down. https://t.co/D5JtEpUUuj

Hunt down Steve Scalise? For a political disagreement?

Scalise has put out a press release yesterday in response to the completely insane decision by House Speaker Nancy Pelosi – which was sane in one sense; namely that had she continued resisting the calls for impeachment by the increasingly-loud Hard Left nuts in her caucus, it was becoming clear that they would run her out of her current post – to go forward with an impeachment investigation arising from this Ukrainian business which will almost certainly fall harder on Joe Biden than anyone else, and as you’d expect Scalise took up for the President…

“It’s now clear that Democrats launched a formal impeachment inquiry on the basis of rumors, rumors that turned out to be false. After reviewing the transcript of the call between President Trump and Ukrainian President Zelensky, it is clear that there was absolutely no quid pro quo, and no laws broken on the call. Speaker Pelosi, who pledged that the President broke the law, owes the American people an apology for her calls to begin impeachment proceedings when there is no basis for that reckless decision.”

That’s where this came from.

Most of America agrees. Impeachment polls like poison everywhere but the deep blue places.

But if you want to disagree with Scalise, that’s fine. It’s still a free country, after all – at least until Mann’s crowd takes over and works their psychoses out over public policy and the trampling on constitutional rights. What you really can’t do is talk about “hunting down” someone who’s had a similar experience.

Our Joe Cunningham from our group here at The Hayride said…

Happened once. Did you forget? It was rhetoric like this that caused it. https://t.co/0Bzb719peW

A taxpayer-funded university such as LSU shouldn’t employ as a professor of journalism someone whose public statements echo the actions of people like James Hodgkinson, who attempted to assassinate Scalise over his political beliefs and support for the president and nearly succeeded. It’s unseemly, and it’s in bad faith for LSU to continue having Mann on its campus.

It’s time for him to be fired. And perhaps it’s time for people who don’t want to accept this behavior at their university to begin withholding donations from the university until Mann is gone.

UPDATE: We’re not the only ones…

State Rep. Mark Wright (R-Covington) is calling for LSU President King Alexander to take immediate action to remove journalism professor Bob Mann from his position at Louisiana State University, after Mann posted a tweet in reference to Congressman Steve Scalise that read, “History will hunt him down.”

“While I have been bothered for years that Bob Mann utilizes his taxpayer-funded position to promote his radical, liberal, partisan stances, I strongly believe that his vile words today necessitate his resignation, or immediate action by President Alexander,” Wright said.

“I fully respect the Constitution and the First Amendment, and Professor Mann is free to speak his mind,” Wright said. “The First Amendment doesn’t ensure there will be no consequences for certain types of speech, and Mann has crossed the line, suggesting violence against a public official – and one who has already survived an assassin’s bullet. There is a place for disagreement in the public square, but that also demands civility and basic humanity.

“Congressman Scalise has not only been a personal friend for decades, but he has also been a tremendous public servant and advocate for the State of Louisiana,” Wright said. “Mann’s despicable reference to violence, be it meant for our President or our Congressman, have crossed all lines. I believe Mann’s comments were intentional to draw attention to himself and to incite acts of violence towards those of differing political beliefs. Mann must be removed from his taxpayer-funded post.”

Interested in more national news? We've got you covered! See More National News
Previous Article Abraham’s Endorsement Train Keeps Chugging Along, Including Landing LOGA
Next Article Maybe James Gill Has Been Out In The Sun (Or At The Bar) Too Long