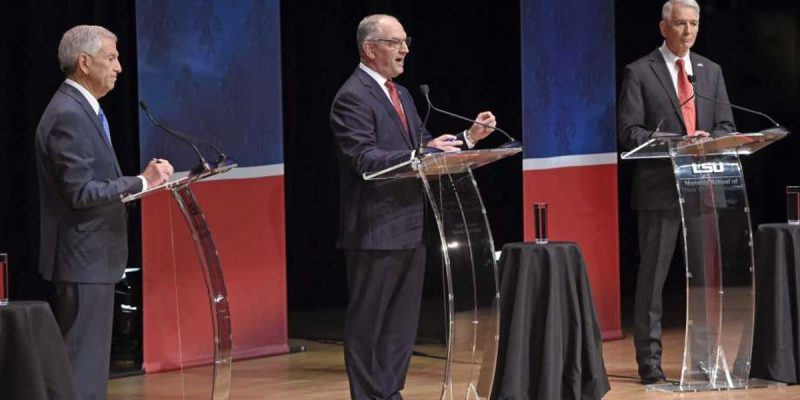 Republicans challenging Democrat Gov. John Bel Edwards performed better in a debate broadcast on Louisiana Public Broadcasting stations, and as a result they didn’t end up the biggest losers.

Each gubernatorial candidate had a job to do, which changed somewhat for the GOP contestants since last week’s initial foray. While Edwards still had to deflect and distract from a disappointing record, with Eddie Rispone closing in on Rep. Ralph Abraham, both Republicans now had to show they made a better contrast with Edwards.

That can happen two ways, not incongruent with each other: attack each other’s past and policies and/or attack Edwards’ record. Rispone did a bit of attacking Abraham, while Abraham got some shots in on Edwards. Meanwhile, even as Edwards didn’t get quite as free of a ride as he did the last time, his tactic of disingenuous statements, if not outright lies, largely went without challenge.

For example, perhaps the most biting question of the night to Edwards came from, of all people, the Baton Rouge Advocate’s Mark Ballard, who moonlights once a week on the opinion page and there clearly writes left-of-center pieces (not that another panelist, USATODAY Networks’s Greg Hilburn, isn’t also from the left, and keep in mind that the remaining panelist, LPB’s Natasha Williams, got her present job when Edwards hired away her predecessor). Ballard asked about the state’s economic progress in light of recent data showing under Edwards Louisiana poverty increased to the nation’s highest rate.

Edwards then proceeded to do his now-familiar dance, talking about how the proportion of the uninsured had decreased and wages had increased to their highest level (when targeted on this, he’ll usually throw in other non-sequiturs such as the highest state GDP as well). But that’s all meaningless because almost every state is experiencing the same because of Republican tax-cutting and deregulation over the previous two years — policies exactly at odds with what Edwards has advocated — but Louisiana is experiencing almost the least increases of all, being the leakiest boat in the rising tide.

He needed to be called on this, and the Republicans had chances to do so, perhaps as part of answers to other questions, but certainly in their closings. Using the latter as an example, all they needed to say was something like this: “Under Gov. Edwards leadership, we have become the most poverty-stricken state in the Union, we have added hardly any jobs and have one of the highest unemployment rates in the nation, people have moved away from here in the highest percentage terms in the country, our economy has grown among the least of all states, and we have suffered billions in tax increases while spending has increased at almost twice the rate of inflation. We need new leadership” and then append a short statement why he the speaker was the guy for the job.

Abraham did confront Edwards on Medicaid fraud that Edwards policy had encouraged and on lost jobs (but which he allowed Edwards to make into a “he said/she said” exchange as Edwards tries to defend that by using seasonally unadjusted numbers, which no economist or analyst uses), and he did make Edwards look uninformed and confused on an issue about some of his Board of Elementary and Secondary Education appointees greased the skids for someone accused of sex crimes to teach, but the arcaneness of that blunted the effectiveness. Rispone also did get a dig in on the state losing jobs last year.

For his part, Edwards was off to the races with distortions. He took credit for economic development projects begun under his predecessor GOP former Gov. Bobby Jindal yet derided his economic performance — even though by the numbers Louisiana’s economy under Jindal’s polices performed demonstrably better. He kept harping on “stability,” meaning that the record-high tax increases he backed which helped to prevent budget cuts and paid for bigger government — even though current surpluses came not from tax increases he supported, but changes in federal government tax policy.

He sanctimoniously called Louisiana one of the lowest-taxed states using badly out-of-date data not including the recent tax increases when in the past he criticized a number of state rankings that put Louisiana at or near the bottom because they used only slightly dated data. And he repeated a lie from his 2015 campaign when he asserted Medicaid expansion would bring back federal tax dollars from state taxpayers going to fund expansion elsewhere; by expanding Medicaid in one state, it increases federal outlays drawn from all states regardless of whether they have expanded Medicaid. And, he escaped queries about his family’s slaveholding and Jim Crow past in the context of national Democrats calling for reparations and hypocrisy while he previously insinuated Republican Pres. Donald Trump was a racist — not that any of the journalists there with their pedigrees would ask such a thing.

While Edwards got more dinged this time out, neither Abraham nor Rispone effectively contrasted themselves with him, with Rispone spending as much effort in critiquing Abraham as he did Edwards. Nobody won this debate, but the biggest losers were the viewers, who find themselves relative to this contest akin to the prisoners in Plato’s allegory of the cave.