Reeling from his inability to close out the governor’s race on Saturday night and desperate to change the narrative that Eddie Rispone is coming for him in the runoff, John Bel Edwards put out a poll on the runoff which was completely predictable… 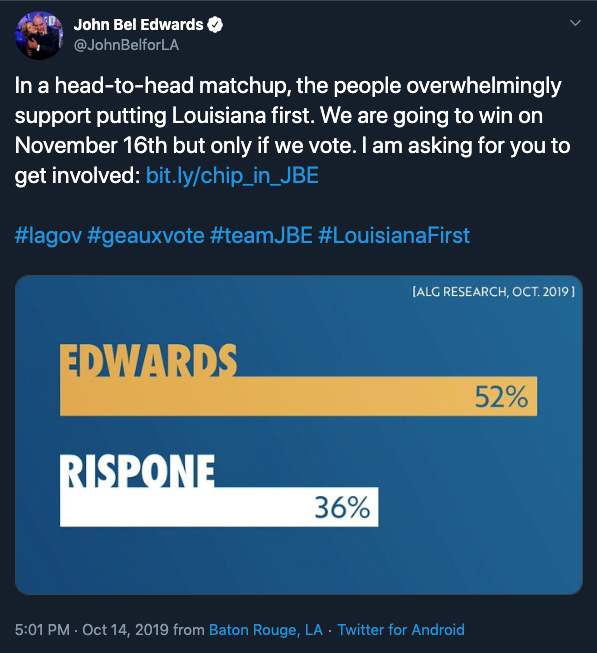 Democratic Gov. John Bel Edwards’ campaign team has released an internal poll showing Edwards with a wide lead over Republican Eddie Rispone in an effort to dispel some sentiment the governor faces an uphill battle to win the Nov. 16 runoff election.

The survey conducted by ALG Research shows Edwards leading with 52% compared to Rispone at 36%.

Many view internal polls with skepticism compared to independent polls because they can be used to tell a positive story for the candidate who paid for them.

The campaign said the survey was taken before Saturday’s primary election from Sept. 30-Oct. 3 with 600 likely voters.

Edwards finished first in Saturday’s primary election with 47%, while Rispone earned a spot in the runoff with 27%. Congressman Ralph Abraham, the other leading GOP candidate, was third with 24%.

Though Edwards’ primary election results were far in front of Rispone’s, the two Republicans candidates together topped 51%.

That means Edwards will likely have to pull some of Abraham’s support to his column.

Abraham endorsed Rispone Saturday night, but the two men waged a fractious campaign during the primary.

ALG’s poll shows 12% of Abraham’s voters said they will vote for Edwards in the runoff with 15% of them undecided.

No incumbent governor has won when pushed to a runoff, although it’s only happened once in modern history in 1987 when then Gov. Edwin Edwards conceded to Buddy Roemer after the primary.

Two dispositive points here. First is the most obvious, which is that this poll Edwards released yesterday was taken BEFORE THE PRIMARY ELECTION. And in the real poll with the most complete sample available, that being the actual election which was voted on by 1.3 million people, just under 54 percent of the respondents voted against John Bel Edwards.

Which makes this poll Edwards is now touting completely obsolete.

Particularly given the fact that Ralph Abraham publicly endorsed Rispone and gave the justification that getting rid of John Bel Edwards was the most important thing about the election. You don’t think that the 15 percent undecided and 12 percent calling themselves crossover Edwards voters might be changing their opinions after Abraham’s statement?

It’s willfully deceptive to put out pre-endorsement numbers following the endorsement as though they were post-endorsement. It’s a lie, and it’s typical of Team Edwards.

The other point is that ALG Research is the new name for Anzalone-Liszt Group, which is a Democrat push-polling operation we’ve talked about repeatedly here at The Hayride. These clowns show up in practically every election cycle and their numbers are usually from somewhere just north of Fantasyland. Anzalone was the pollster who put out the lie that Obamacare was popular in Louisiana and Mary Landrieu bit on that hook, only to see herself be put to pasture at the next election. Anzalone also put out numbers showing Charlie Melancon within striking distance of David Vitter in the 2010 Senate race; he got beat by 19 points.

Anzalone has also gotten in trouble for running push-polls in places where it’s against the law to do so.

So of course Edwards would use Anzalone for this poll.

We don’t see crosstabs from it, so heaven only knows what kind of cockamamie sample was used to produce these numbers. If Democrats weren’t a good 50 percent of the voters (and blacks weren’t 31 percent) we’d be surprised. We don’t have the official turnout figures for the primary, but Louisiana’s voting electorate no longer looks like that.

Edwards’ people thought they were going to blow this thing out Saturday night and ended up with egg all over their faces, thanks to the same internal polling they just put out publicly. So that’s what this poll is worth.

But the last thing to note about this poll is the political mistake it is to release it.

And that’s the exact narrative he can’t afford. Which he just fed. Unnecessarily.

Finally, yesterday there was Moon Griffon laying into Edwards and his false narratives and what happened on Saturday…