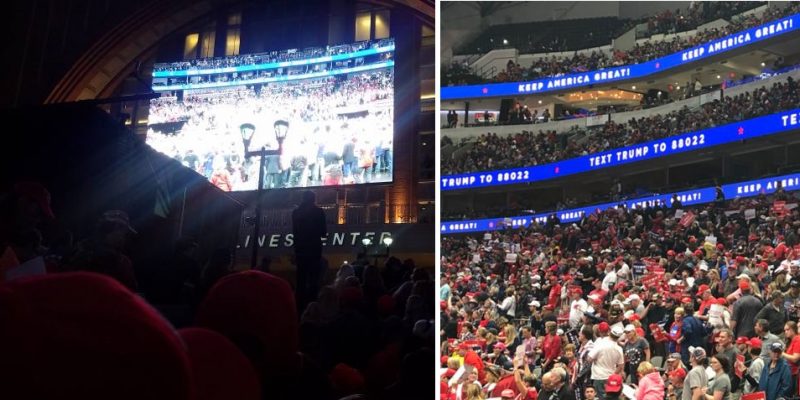 The American Airlines Center arena holds around 20,000 people, and with there being about as many or more outside in the plaza as an overflow crowd, the Dallas Trump rally has become a recent high water mark of enthusiasm for the President’s re-election bid.

The Republican Party of Texas said Friday that President Donald Trump’s record-setting campaign rally in Dallas sent a strong message nationwide, according to a report by KLIF-AM in Dallas. According to Chairman, James Dickey, the rally may have bumped more than a few young fence-sitters into the pro-Trump camp.

According to Steve Gaylord, a North Texas conservative activist and former local officeholder who attended the rally, those who arrived in the morning (some camped out overnight) were able to have their pick of seats when the doors opened at 3 p.m. Gaylord said according to talk show callers, people that got there after 2 or 3 in the afternoon did not get in or had other difficulties.

“Everyone was standing during most of President Trump’s speech,” Gaylord wrote via Facebook. “It was great to be among patriotic Americans that recognize our system is one of limited government, with bountiful freedom, and a strong belief in God, not a nanny state government with leaders that think they know better than the almighty God how our country should be run, attempting to restrict our freedoms under the guise that they know what is best for everyone else.”

Among those having difficulties getting in, Leland Freeman, a Central Texas conservative media broadcaster and commercial pilot, found himself in the overflow crowd in the plaza after waiting in the wrong line. We offer his perspective below in the interests of better event planning:

[…] The issue with what happened in Dallas was the complete lack or organization with the line cues that allowed thousands of line cutters to jump ahead of those that had been waiting for hours. Some of which was actually facilitated by Dallas event personal on the ground. As the lines grew appropriate barriers were not set allowing people to jump ahead in line by hundreds if not thousands of people as the cues folded over themselves.

As the cues extended blocks beyond the American Airlines Center they were formed into figure eights that lead to nowhere. Compounding this, new lines form from those that just arrived and were allowed to cut ahead of the thousands that had been waiting for hours. Those in line that argued with law enforcement over this were threatened with arrest for disorderly content. This happened multiple times while in line, including a cue that ran the city block next to the W Hotel next to the arena.

The cue was then directed to fold on itself once again to walk the entire block away from the arena before allowed to turn back towards it. Once again no barriers were set up at that point and thousands of line cutters made it past the waiting crowds. By the time I personally got to the front of the arena through Victory Park, the final insult was thousands were directed into a cue that was barricaded off from the security checkpoint that led to the Porto-Johns. To say what a load of crap is an understatement.

When the thousands of us realized what happened, we could not get back in line to get into the venue to see the President. This was such a disorganized disaster compared to other Trump rallies that I had attended in Austin and Houston were much more organized with their line cues. I guess the two lessons learned were get in line early enough to avoid being sent into a cue that leads to nowhere, and don’t play by the rules because the thousands of line cutters got in and I didn’t. […]

Freeman suggested Trump host a rally in Houston’s Minute Maid Park, which could hold 42,000 — but only if the line protocol is improved.