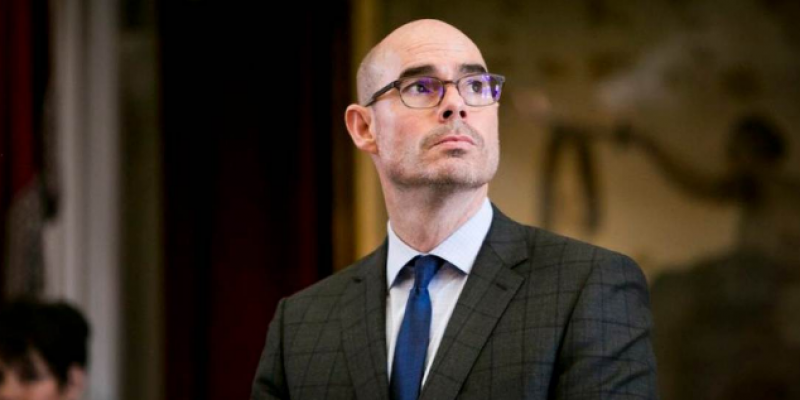 Sullivan said he will release the recording Tuesday ahead of a scheduled 2 p.m. hearing on the matter in Travis County.

The Republican Caucus has long planned to meet Thursday for a retreat during which members will vote on a new chairman to fill Burrows’ vacancy after he resigned in August.

Sullivan plans to discuss the controversy on the Fort Worth-based WBAP 820 AM Chris Salcedo Show at 9:15 a.m Tuesday. The recording will also be published on his organization’s website, Texas Scorecard.

Before releasing the audio, Sullivan published a timeline of events listed chronologically pertaining to Bonnen and Burrows. The timeline begins with Bonnen’s appointment Dec. 1, 2018, and ends with media coverage of the Texas Ranger investigation on Oct. 8, 2019.

“Since announcing I would release the audio of the meeting with Speaker Dennis Bonnen, several subscribers have asked for a ‘timeline’ of the events leading up to, and following, the meeting,” Sullivan said, which he published in an email to subscribers.

April and May events relate to claims Bonnen made about a Second Amendment activist, which DPS footage revealed were false, Sullivan says.

Bonnen told various media outlets he was instituting a policy of banning members from engaging in electoral campaigns against each other, preventing legislators from endorsing, financially contributing, or otherwise assisting in races against incumbent members, including Republicans.

The Houston Chronicle reported at the time “the warning applies to members of both parties and those who serve as party chairs.”

After these announcements and on May 29 at a brief encounter at Hobby Airport, Bonnen asked Sullivan to schedule a meeting with him at the Capitol, which eventually was on June 12.

On June 19, Sullivan sent a letter to Bonnen and Burrows stating, “I unequivocally reject your offer.”

Bonnen replied to Sullivan June 27, denying their conversation, saying, “No offer was made to you of any kind….”

On July 25, Sullivan published an article about the meeting on TexasScorecard.com.

On July 26, Bonnen emailed the House Republican Caucus, claiming he told Sullivan in the meeting not to target Republican members.

On July 29, Bonnen released an official statement, saying, “At no point in our conversation was Sullivan provided with a list of target Members….”

On July 31, Sullivan announced he recorded the conversation.

By Aug. 12, the Texas House General Investigating Committee requested the Texas Rangers to open an investigation. The next day, Brazoria County District Attorney Jeri Yenne made a prosecutorial request of the Texas Rangers to investigate Bonnen. Three days later, on Aug. 16, Burrows resigned as GOP Caucus Chairman. One week later, Burrows went on a Lubbock radio show saying “there was no physical list.”

By Sept. 23, Lt. Gov. Dan Patrick said on the Mark Davis Radio Show that he and Gov. Greg Abbott wanted the audio released.

And on Oct. 8, media outlets began reporting that the Texas Rangers are requesting all House members to share information about their investigation into Bonnen.

During the June 12 meeting, Sullivan alleges that Bonnen told him “He would ensure Texas Scorecard reporters received House floor access in 2021 if we would lay off our criticism of the legislative session, not spend money from our affiliated PACs against certain Republicans, and – most shockingly – go after a list of other Republicans in the 2020 primary elections.”

Empower Texans’ Texas Scorecard Capitol bureau has been denied media credentials over the last two years by the House, despite having it granted by the Senate. Empower Texans filed a federal lawsuit on the matter, which is before the 5th Circuit Court of Appeals.

The True Texas Project PAC and the Republican parties of Denton, Polk, Montgomery and Nueces Counties have called for Bonnen’s resignation.

Sullivan’s timeline leaves out Bonnen’s Aug. 6 apology email sent to 149 House colleagues for “terrible things” he said about some of them.

Bonnen emailed that the June 12 meeting “was a mistake,” and, “I said terrible things that are embarrassing to the members, to the House, and to me personally.”

In response, Sullivan tweeted, “At what point will he apologize for lying to the public and his #Txlege colleagues? When will he apologize to me for putting me in the position of hearing his unethical proposal?”

Members of the public can listen in at WBAP 820 AM to hear Sullivan on The Chris Salcedo Show at 9:15 a.m Tuesday. The recording of the meeting is scheduled to be published on TexasScorecard.com around the same time.

Interested in more news from Texas? We've got you covered! See More Texas News
Previous Article Is There A Competent Firm In The Running For The EBR Superintendent Search Process?
Next Article Louisiana auditor: Shreveport is $1 billion in debt