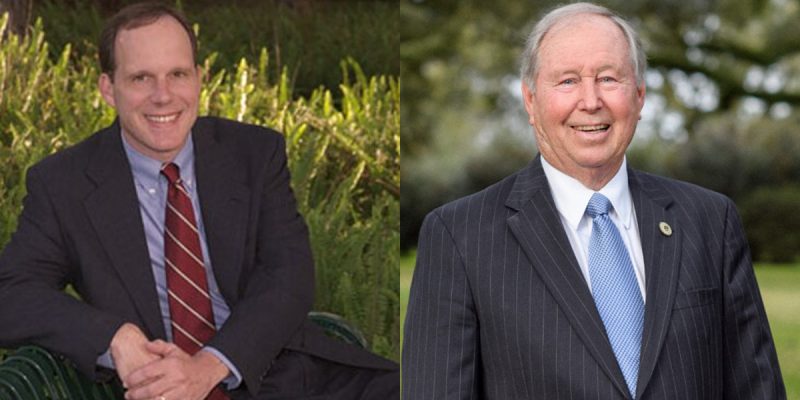 Boy, the legacy media in Baton Rouge sure made a big deal over Grigsby’s efforts at breaking that deadlock between Foil and Carter, didn’t they? Turns out the whole thing was a tempest in a teapot.

Franklin Foil has narrowly edged out fellow Republican Steve Carter for the No. 2 spot in the Senate District 16 runoff against Democrat primary winner Beverly Brooks Thompson by a total of four votes.

Following a nearly six-hour hand recount at City Hall today of more than 1,100 paper ballots that were either mailed, faxed in or filled out in person on election day, East Baton Rouge Parish Commissioner of Elections Steve Rayborn announced that Foil had received 605 paper votes to Carter’s 448, putting him narrowly in the lead.

Heading into today’s recount, the two candidates were believed to be evenly tied, with 12,522 total votes each, according to the Louisiana Secretary of State’s office. Of those, 451 scanned paper votes had supposedly gone to Carter, while 604 had gone to Foil.

On the recount, Foil gained one vote while Carter lost three. A handful of ballots were thrown out because they were marked twice or left blank.

Foil’s  attorney popped off some smart-aleck crack about how his client won’t need a judgeship now, in reference to Grigsby’s offer to back him for one if he pulled out.

At the end of the day, almost nobody not directly involved with either camp (or that of Thompson, the Democrat) is upset about this outcome. Both Foil and Carter are perfectly qualified to represent SD-16, and either would be at least as good as outgoing Senator Dan Claitor has been.

There should not have been a controversy over Grigsby’s statement to Claitor, intended for the latter to pass along to Foil, about the judgeship, because Claitor shouldn’t have alerted the media. The statement should have been kept private and a simple “no” would have sufficed as an answer. Instead, Claitor has created a media issue the Democrats have pounced on in an effort to discredit Eddie Rispone for his long-time association and collaboration with Grigsby in helping to fund conservative candidates and causes. It isn’t by any means a stretch to say that Grigsby and Rispone have in large measure funded the Louisiana Republican Party into the electoral force it currently is, so there should be no doubt about the legacy media’s desire to tear one or both down.

Claitor opened the door for that. It ought to be remembered when he runs for something else.

But with respect to the race for the seat he currently holds, Foil makes a great candidate and here’s hoping he crushes Thompson with 60 percent of the vote or more on Nov. 16. The odds are he’ll do just that.

Interested in more national news? We've got you covered! See More National News
Previous Article Texas GOP Chair: 99 Problems But Congressional Retirements Aren’t One
Next Article Hey JBE, Are You Sure You Want To Call Lane Grigsby A Criminal, You Hypocrite?