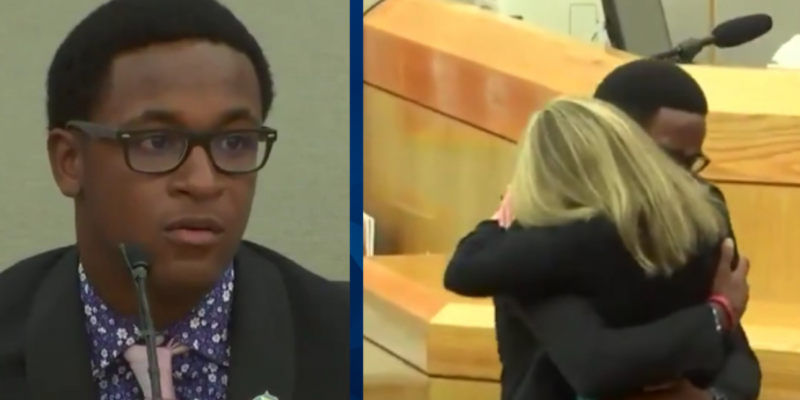 Former Dallas police officer Amber Guyger was sentenced to 10 years in prison for murdering a Botham Jean, a man she shot when she mistook his apartment for hers. Guyger was off duty and still in uniform when she mistakingly entered the wrong apartment and shot someone she thought was an intruder.

At the sentencing family members were allowed to make a victim impact statement.

What the Botham’s brother, Brandt Jean, did brought people to tears.

“If you truly are sorry,” Brandt told Amber.  “I know I can speak for myself, I forgive you.”

“I think giving your life to Christ would be the best thing that Botham would want for you,” he told her. “I love you as a person, and I don’t wish anything bad on you.”

He told Guyger he didn’t even want her to go to prison.

Afterwards the judge came down from her bench and hugged the victim’s family members.

“Thank you for the way you modeled Christ,” the judge told Botham’s mother, Allison Jean.

The judge also gave Guyger a Bible and told her to read it. The Dallas Morning News reports:

“Attorneys, bailiffs and journalists wiped away tears as they watched Jean and Guyger hug and as then leaned in to hear Kemp’s words.  A box of tissues was passed around.