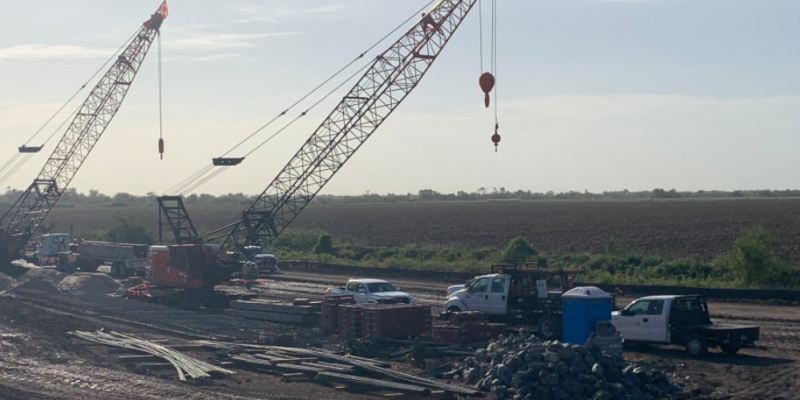 Construction has begun on the first new border wall near the Donna-Rio Bravo International Bridge along the southern border with Mexico, according to information released by the U.S. Department of Homeland Security.

The gate construction project includes the installation of automated border wall gates, associated equipment, and site improvements at current openings in the existing barrier in the U.S. Border Patrol’s (USBP) Rio Grande Valley (RGV) Sector, DHS reports. Once completed, a 150-foot border enforcement zone will be implemented around the wall.

The project is being built through a partnership among U.S. Customs and Border Protection, the U.S. Army Corps of Engineers, and Gibraltar-Caddell Joint Venture, which was awarded a $296 million contract July 31. It encompasses building 22 miles of noncontiguous border wall beginning east of Santa Ana, and 18 to 30-foot tall steel bollards filling the gaps within an existing wall built in 2008.

The gates will be located on the U.S. International Boundary and Water Commission levee at existing levee ramps. Once installed, they “will serve as a persistent impediment to smuggling organizations while still allowing river access for property owners, USBP, other local/state/federal officials, and local emergency responders,” according to the DHS statement.

The construction of the wall is being funded by CBP’s fiscal 2017 appropriation. It is not receiving funds through the National Emergency Declaration, 10 U.S.C § 284, 10 U.S.C. § 2808, or through Department of Defense appropriations.

Congress appropriated $1.375 billion for a South Texas border wall in the fiscal year 2019, but specifies that construction cannot take place in national park and refuge areas.

Interested in more news from Texas? We've got you covered! See More Texas News
Previous Article Watching the Nationals play baseball is a reminder of why baseball is the all-American sport [videos]
Next Article St. Tammany Parish’s $3,215-per-month cost of living is the highest in Louisiana