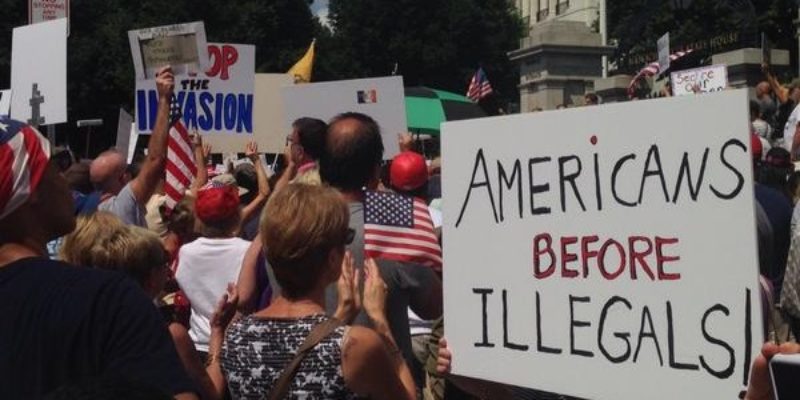 Decriminalizing 11-22 million illegal aliens living in the U.S. and forcing American taxpayers to pay for free healthcare for them is criminal, he said.

“When those Democrats raised their hands, what that said is, is that they’re willing to sacrifice the working class of this country to siphon off their funds and their healthcare to benefit illegal aliens who violated our laws and broke into our country,” Miller said. “It is a great crime against the working people of this country.”

“On the question of immigration, [the 2020 Democrats] are all indistinguishably supportive of open borders and mass migration and unlimited benefits for foreign citizens all across the world,” Miller said.

Breitbart News estimates that paying for free healthcare for every illegal alien in the U.S. would cost taxpayers roughly $66 billion a year.

To protect taxpayers, President Trump signed an executive order requiring those lawfully admitted into the U.S. must prove they can afford to pay for their own healthcare.

“… so that you and I and every other citizen in this country and every other person lawfully residing here today does not have to cover those health care expenses, that we will not use our healthcare system to subsidize all of planet Earth, which will mean rationing of care and denial of coverage for us citizens,” Miller said.

“We know that non-citizens are uninsured at a much higher rate than U.S. citizens and that bringing in large numbers of new non-citizens who have no means and no ability and no capacity financially to cover their health care costs means longer lines in emergency rooms,” Miller added.

“It means fewer hours of time to see your doctor, it means less access to basic medicine, less access to basic procedures, it means less and worse care if that’s allowed to happen,” Miller said. “And so this is going to protect the availability of those benefits for U.S. citizens and persons today that are already living and residing here lawfully.”

When asked to rank 12 policies from best to worst, the Democratic plan to provide taxpayer-funded healthcare to all illegal aliens ranks as least popular, according to a recent Wall Street Journal/NBC News poll.

Of 12 policy ideas tested in the poll, providing government-sponsored health care to undocumented immigrants was the least popular among the broader electorate, with 62% rejecting it.

In a June Democratic debate, all 10 candidates on the stage, including Messrs. Biden and Sanders, raised their hands when asked who backed the idea. In the new survey, it was supported by 64% of Democratic primary voters but only 36% of voters overall.

A MIT researcher also found that swing voters are overwhelmingly against the Democrats’ open borders agenda.