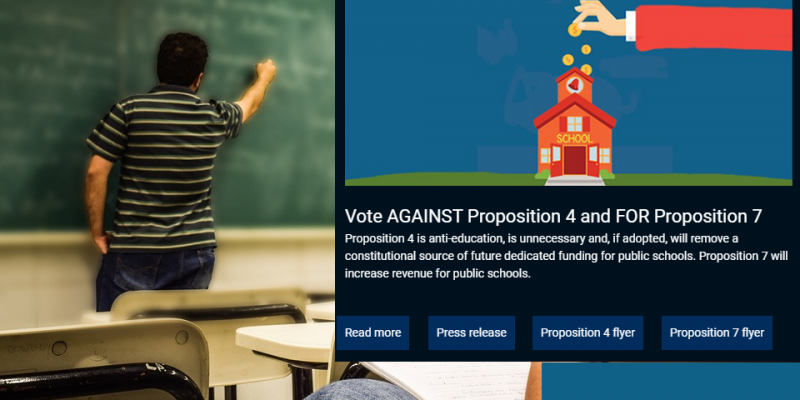 It’s not outside the norm for state educator unions to take a position on proposed constitutional amendments.

After all, and in Texas, public K-12 education spends $60 billion of Texas’s $217 billion budget.

But what’s raising eyebrows is why associations dedicated to education policy and teacher advocacy are weighing in on how tax revenue is collected. Two of the three major teacher associations in Texas are opposing Proposition 4, the amendment that would effectively ban a statewide income tax.

Maintaining the current system of taxation by a vote of the people of Texas, according to the Texas State Teachers Association (TSTA — an affiliate of the NEA), “is anti-education, is unnecessary and, if adopted, will remove a constitutional source of future dedicated funding for public schools.”

The Texas chapter of the American Federation of Teachers, a more labor union-oriented group, is concerned that the absence of a future state income tax “could create new long-term difficulties for finding solutions to fully fund education in the state.”

Both TSTA and AFT linked to a left-oriented think-tank, the Center for Public Policy Priorities (CPPP), for further justification of opposing a ban on a state income tax.

The newly formed Innovative Teachers of Texas, a conservative-oriented educators association, has not issued a position.

Over the last decade, teachers associations and left-leaning organizations have become more aggressive in their efforts to activate educators into “block voting” [sic] supporting various policy goals and candidates.

TSTA pointed out that since 1993, the Legislature has been required to seek voter approval before enacting a state income tax. What Proposition 4 would do is raise the threshold for legislators (two-thirds instead of a simple majority of each chamber) in order to send it to the voters for approval. See our full analysis here.

A list of all our Texas Constitutional Amendment propositions analyses and recommendations may be read here. Early voting continues in Texas through Nov. 1, with election day Nov. 5.