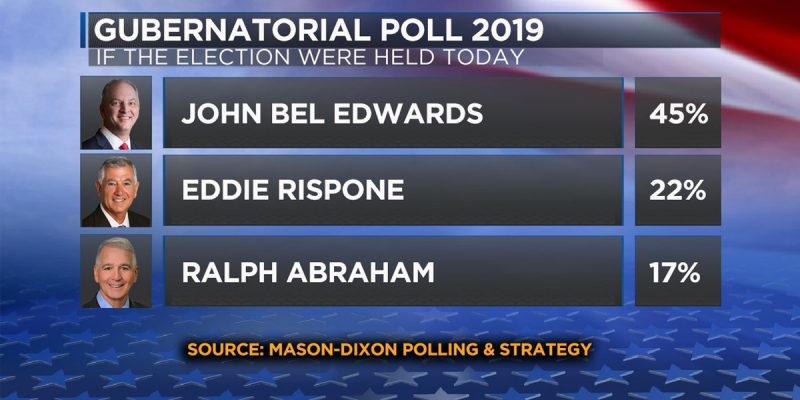 The survey, commissioned by the Gray Television stations around the state (until last year those were Raycom stations), was pretty good news for Eddie Rispone – and Mason Dixon is a fairly well-respected pollster.

The poll conducted by Mason-Dixon Polling and Strategy on behalf of the six Louisiana Gray Television stations, shows Incumbent Edwards at 45 percent, Rispone at 22 percent, and Abraham at 17 percent. The poll of 625 of registered voters has a margin of error of 4 percent. All of the voters polled said they were likely to vote in the Saturday Oct. 12 election. Ten percent of those polled were undecided.

The breakdown by party affiliation had 80% of Democrats supporting Edwards while Republicans were split with 41% backing Rispone and 35% behind Abraham.

If there’s a run-off between Edwards and Rispone, 51% of those polled said they would vote for Edwards while 42% said they would cast a ballot for Rispone. 7% were undecided.

If a run-off occurs between Edwards and Abraham, the poll found 53% would back Edwards while 38% would support Abraham. 9% were undecided.

The poll was done in advance of the final gubernatorial debate, which will appear on Gray’s stations – including KPLC in Lake Charles, WVUE in New Orleans, WAFB in Baton Rouge, KALB in Alexandria, KNOE in Monroe and KSLA in Shreveport. The numbers in it look pretty similar to those in last week’s We Ask America poll; Rispone is at 22 in this one compared to 23 in We Ask America, and Edwards is two points shy of the 47 he picked up in that poll last week.

If you’re Rispone you have to like the poll, as it shows him having clearly moved into second place and leading Abraham beyond the margin of error. Abraham’s problem, namely that he doesn’t have enough money to hang with Rispone and Edwards on TV, might have been his undoing.

That is, if you believe the poll.

We’re not sure we do. Not because we don’t think Mason Dixon knows what they’re doing, though the poll’s likely-voter screen seems pretty lax – they called registered voters and asked them if they were voting, rather than calling chronic voters.

That isn’t so much a fault in methodology as it is, we think, a concession to reality. Because polling has become harder and harder to do accurately. People won’t answer the phone for a pollster – or, perhaps better put, the people who pollsters need to properly sample the electorate don’t.

Your hard-core conservatives and busy upper-middle class professionals, for example. They don’t answer calls from pollsters. But they’re the most frequent voters in the electorate. And you cannot poll them, because they won’t take your calls. Many of them don’t have land lines anymore, and thanks to the explosion of robocalls on their cell phones they don’t take calls from any numbers they don’t recognize. So you can’t reach them.

But as the early voting showed, they vote. They vote more often than anybody else.

Our theory is that this poll, which shows Edwards down a couple of points since the last raft of polling which had him at 47 percent following Rispone’s attacks on Abraham, is still overstating the governor’s support, and it’s understating both Abraham and Rispone.

And we think it’s understating Abraham’s support more than Rispone’s.

We could be wrong. We think Abraham is underpolling for two reasons, one which also applies to Rispone. Both Republicans are underpolling because the hard-core conservatives aren’t answering the phone when the pollsters call. Neither one has cornered the market on the conservative vote so far as we can tell; we think Rispone might have a few more than Abraham because he’s positioned himself as the Trump acolyte in the race, but our guess is it’s pretty close to 50-50 between the two for those voters that the polling so far has undersampled.

But Abraham’s ace in the hole is, according to our theory, he’s going to have a little better turnout operation than Rispone. Abraham also picked up the endorsements of most of the parish Republican Executive Committees, and while some of those are meaningless others bring with them some little political machines capable of turning out the vote. Additionally, Abraham’s strength tends to be in small-town and rural places around the state, particularly in North Louisiana but also potentially in Acadiana (the PEC in Lafayette Parish endorsed him this week) and the southwestern part of the state. Those are places pollsters tend to miss, as they’re usually filling out their samples by calling in the state’s metropolitan markets. What market does Ville Platte fit in, or Winnfield, or Bogalusa? Abraham will do a lot better than 17 percent in those places, and if their turnout is disproportionate it could bolster him by a few points.

Outwardly, Rispone seems to have more momentum than Abraham. His latest ad, which has him making his case to an audience with a microphone in his hand, is the best one yet. He gave a better speech than Abraham at Monday’s Republican event in Lafayette starring Donald Trump, Jr. and Kimberley Guilfoyle. And the Mason Dixon poll was the second survey in a row showing him ahead of Abraham. Additionally, Rispone has begun picking up some endorsements, the tally of which so far has been lopsided in Abraham’s favor. He picked up the sole endorsement of the Associated Building Contractors, he landed an endorsement from outgoing Sen. Jack Donahue and he got a PEC co-endorsement in St. Bernard Parish last week.

We think these polls which have Rispone and Abraham both muddling along at around 20 percent might be underselling each by 4-6 points, and on Election Night they’re both going to muddle along at around 25 percent. The minor candidates in the race are likely to split up about five or six points, and that puts Edwards in the neighborhood of the 45 he’s currently showing – he might be a little below that number in reality, but he won’t get completely shut out of the undecideds.

One thing we doubt the Mason Dixon poll gets right is their showing that Edwards is getting 80 percent of Democrats. That seems a very high number. We expect he’s going to do better with Democrats than, say, Mary Landrieu did, but we’d say anything more than 75 percent is probably too high for him. Mason Dixon says he’s getting seven percent of the Republican vote; that might be a little low, as he’s been getting as high as 25 percent previously, but on the other hand everything which has happened in this race of late should have had the effect of peeling those GOP voters off Edwards.

Mason Dixon’s sample has a 44-36 spread between Democrats and Republicans, something which is probably too friendly to Edwards as well. Early voting indicated Republican voters were 41.5 percent of the electorate. They might not be able to sustain that number on Election Night but they’re going to at least push the 40 percent mark; we think that’s one reason Abraham and Rispone are likely underpolling.

And then there are the head-to-head ballot tests in the poll, in which Edwards is catching 51 percent against Rispone and 53 percent against Abraham. The guess here is neither of those numbers are especially reliable since the campaign is likely to radically change starting on Sunday. If Abraham makes the runoff you can expect a far more robust presence on TV, because there will be a ton of cash pouring into his coffers which likely removes the single largest problem his campaign has had down the stretch. Republicans are kidding themselves, though, if they think Abraham will be able to match Edwards’ campaign spending in a runoff. His fundraising would kick into another gear, but he’ll be starting at nearly zero – several million dollars behind the governor and his minions at Gumbo PAC.

If it’s Rispone, you will see a nearly unlimited amount of TV ads aimed at burning Edwards to the ground – something which has somewhat been done, particularly lately with the Johnny Anderson ads by third parties (the one by Truth In Politics, starring Anderson’s sexual harassment victim Juanita Washington, just got re-upped for a second week on TV due to polling indicating it’s very effective and an influx of donations to keep it on the air). But there’s a lot more ammunition yet unspent against Edwards that a well-heeled campaign could unload.

For example, there’s the issue of Edwards’ pardons, which we understand is a rich vein of material. There’s the controversy about Bayou Steel, where the governor has flat-out lied in blaming Trump’s tariffs for that plant’s closure and in so doing aroused the ire of the White House. There’s the New Orleans airport and the neglect of the state’s Department of Transportation and Development in building access roads to it – something which is shortly going to become a major public nuisance, as the airport will open in the next couple of months (if not sooner; we understand they’re packing up some of the shops at the old airport and moving merchandise to the new terminal) by all indications. There’s Edwards’ brother Daniel and his relationship to the Chad Scott trial. And lots of other items Rispone could throw at him while stoking discontent and identifying himself as a proper agent of change.

But Rispone’s major problem should he make the runoff is going to be reconnecting with the Abraham voters he alienated when he attacked the congressman using material originally dragged into the public eye by Gumbo PAC. There are lots of hurt feelings still out there from those attacks, and not much time to smooth them over. He’s going to have to get a lot of help from Abraham, and his campaign is going to have to show some serious gratitude and humility to stitch together a winning coalition in what would be potentially the most hyper-partisan runoff election Louisiana has ever seen.