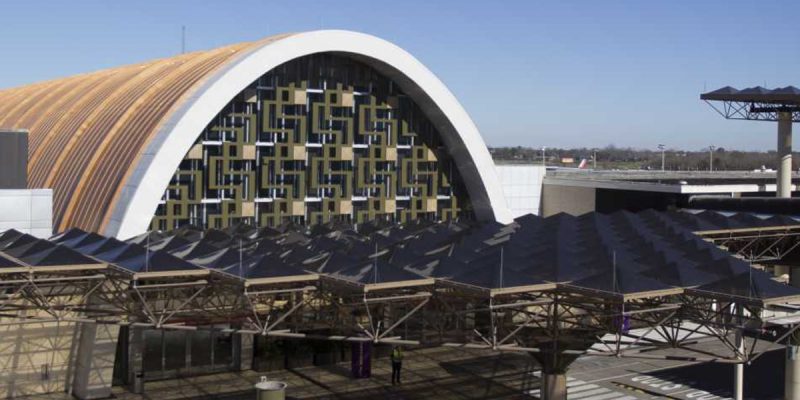 On Tuesday morning I took my last stroll through the familiar B Concourse at the Louis Armstrong New Orleans International Airport. It was quiet and empty as most of the businesses having been transitioned over to their new sites though one was hawking last-second tourist tchotckes at a discount…even then still far over priced.

I recalled my first plane ride ever, to Washington at the age of 17, and the first ever celebrity I had met that same morning (Dick van Patten, the patriarch from Eight is Enough for most, but forever King Roland in Spaceballs for this die-hard Mel Brooks fan).

As a frequent traveler I spent as much time in the airport as I had the Superdome and had become  familiar with practically ever nook in the public areas.

There was one feature that I made a point of at least glancing at while hustling over to the TSA Pre Check line.

On the terrazzo floor between the B Terminal and long-shuttered A Terminal in New Orleans is floor art featuring a big Fleur-de-Lis heralding the city’s airport as “Linking the Americas to the World.”

Perhaps that was the intention when Moisant succeeded the outdated Lakefront Airport as New Orleans’ commercial airline hub.

The boast seems just as outdated as the rest of the facility as Miami supplanted New Orleans long ago for that distinction and there was little the series of extension expansions could do to mitigate that reality.

But there it laid in marble, traipsed over by tourists shuffling to and fro Southwest Airlines flights that brought people from around the country to New Orleans mostly to have a good time and not so much for commerce beyond indulging in Hurricanes, beignets, and bawdy t-shirts about getting “Bourbon faced on…”

Soon those words will he literally reduced to rubble as the airport that fronted Airline Drive is demolished leaving only its new car rental center and badly needed yet inconveniently located old parking garages behind.

Don’t get me wrong, the city was decades overdue for a new airport. The current one being as awful as the Nashville, Memphis, and other poured concrete blocky centers of transport of a design that resembles the high point of 1970’s shopping mall brutalism.

Seriously, even Buffalo has a nicer airport than New Orleans.

What didn’t need to happen was the helter skekter planning that failed to make fly-over access roads an essential component of construction. What was absurdly considered an afterthought will soon be at the forefront of many traffic headaches to come in Jefferson and St. Charles Parishes for four years.

They’re saying three but then again the new airport was also  supposed to open last year and not this week.

I’ll tackle this nightmare upon its actual manifestation in a day or two.

One of the problems with the old airport was that it wasn’t fastidiously maintained and despite the futuristic look of the shiny and new facility across the runways, it won’t take long for it to be run-down if those charged with keeping it together don’t take their jobs seriously.

Some of the worst customer experiences I’ve had in Louisiana were at the New Orleans airport and moving bad staff to a new location isn’t going to help keep things up.

Think about it: the first people a visitor encounters upon landing in New Orleans and the last person they interact with upon leaving are airport staff. And quality control can’t be phoned in but must be rigidly monitored and enforced.

The cab dispatchers who scream for the next low-quality vehicle to pull up to transport travelers to the city, the donut shop employee yapping on her cell phone and another who is bare-handing requested pastries, and others who believe they’re earning their pay for just showing up to work.

This kind of horrendous customer service will remain a blight no matter how spiffy the accoutrements of the new facility look.

If the management of the new airport wants to impress folks, they need to ensure that the bad attitudes get left behind at the old place.