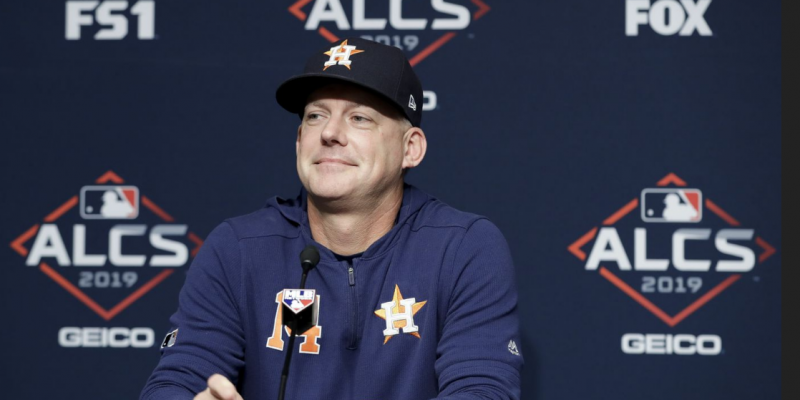 A bombshell report by The Athletic interviews former Astros pitcher who now pitches for the A’s, Mike Fiers, blows the whistle on the team, saying they used technology to steal pitcher signs at home games in 2017.

Former Houston pitcher Mike Fiers told The Athletic that the Astros used a camera in center field to steal signs in 2017, the same year they won the World Series and beat the Yankees in a seven-game ALCS to make it there in the first place.

“That’s not playing the game the right way. They were advanced and willing to go above and beyond to win,” said Fiers, who played for Houston from 2015 to 2017. “I just want the game to be cleaned up a little bit because there are guys who are losing their jobs because they’re going in there not knowing.”

Danny Farquhar, who pitched for the White Sox in Houston, also said he noticed “banging from the dugout, almost like a bat hitting the bat rack every time a changeup signal got put down.”

Wow wow wow. This is bad. Awful for the game of baseball man. Sheesh. https://t.co/r1TN2wTZay

If the Astros hadn’t stolen pitching signs in 2017 would the Yankees have won? That’s what a lot of Yankees fans– and players– are asking.

MLB prohibits teams from using electronic technology to steal catchers’ signs and give them to their hitters, although it hasn’t been enforced. David Shoenfield at ESPN explains:

“Using technology to steal signs is an ancient weapon in baseball, going back at least to the 1951 New York Giants, who used an elaborate buzzer system at the Polo Grounds to relay the catcher’s signs during that famous pennant race that ended with Bobby Thomson’s home run.

“Opponents accused Bobby Valentine of using a camera when he managed the Mets in 1997. (The Mets admitted the cameras were used to tape opposing managers and coaches.) Red Sox manager Jimy Williams accused the Indians of doing it in 1999. Two years ago, the Red Sox were caught stealing signs with the aid of cameras and Apple watches. A team video replay member would pick up the catcher’s signs from a video feed, determine the sequencing when a runner was on second base, and relay that information to the team trainer, who was wearing the watch. The trainer could then alert a player in the dugout or signal to the runner on second, who would then relay the pitch to the batter.”

Astros president of baseball operations Jeff Luhnow said, “We take the allegation seriously and we’re going to look into it. If you’re not following the rules, it’s a serious matter. We want to find out.” He declined to say anything else saying the investigation was ongoing.

Here’s a mashup of all the alleged cheating by the Astros:

The Astros are already under investigation by MLB over Houston assistant GM Brandon Taubman harassing a trio of female reporters, targeting one of them in particular. His bosses reacted by accusing a Sports Illustrated journalist (one of the three women) of fabricating the story before they realized they were wrong. They fired Taubman and apologized to the reporter.

And let’s not forget the alleged wife beater pitcher booed out of the Blue Jays stadium whom the Astros took on when he just received a year-long restraining order for allegedly beating the mother of this 3-year-old daughter.

Houston, we have a problem.