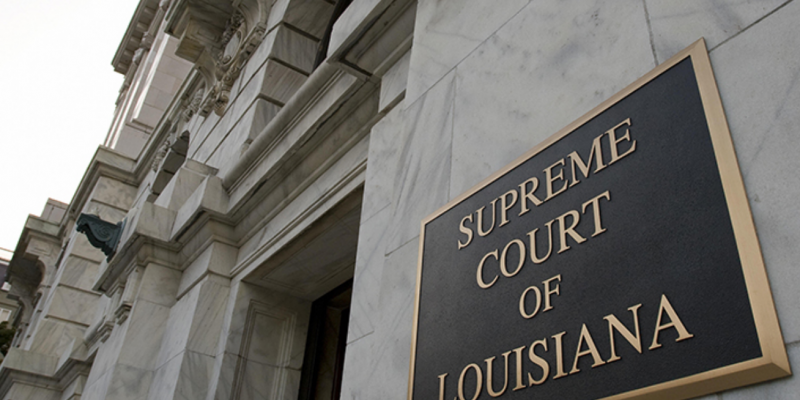 Allegations of bribery against a state Supreme Court justice and the amount of political spending by trial lawyers and other special interest groups in a key race for a seat on the Supreme Court highlight the need for judicial reform in Louisiana, advocates say.

As chronicled by the Times-Picayune-New Orleans Advocate, Louisiana Supreme Court Justice Jefferson Hughes III was accused of offering former Hammond city councilman Johnny Blount $5,000 if Blount would switch his support from Will Crane to Hans Liljeberg in their race for a vacant seat on the state Supreme Court.

Hughes admitted he had a conversation with Blount, but denies the bribe allegation.

“That is not true,” Hughes told the newspaper. “Number one, this is a private conversation, not a public endorsement of any type. And number two, to suggest that I would personally pay out of my own pocket for any amount to any of these guys was a joke, really.”

Observers note that the outcome of the Supreme Court race and other judicial elections will have a huge impact on cases across the state, including more than 40 lawsuits filed against the oil and gas industry claiming hundreds of millions of dollars or more in damages to the state’s coastline.

Trial lawyers have poured money into the Supreme Court race, most of it going to Liljeberg, currently a judge on the 5th Circuit Court of Appeal, according to campaign finance reports filed with the Louisiana Ethics Administration. Seven law firms directly involved in coastal litigation have donated $1 million through direct and indirect contributions to Liljeberg’s campaign.

“An enormous amount of money is being invested in the Louisiana Supreme Court race by a small group of trial lawyers who have a direct financial interest in coastal and legacy lawsuits,” Louisiana Oil & Gas Association President Gifford Briggs said.

“This kind of outsized spending contributes to the growing perception of Louisiana as a judicial hellhole, and it undermines the appearance of honest, even-handed decision-making in our state courts,” Briggs added.

On the other side, Crane, a judge of the Louisiana First Circuit Court of Appeal, has received hundreds of thousands of dollars from business groups including the oil and gas industry.

A three-judge panel of the Louisiana Third Circuit Court of Appeal acknowledged the influence of special interest groups in judicial elections earlier this year.

“Now, special interest groups are pouring large sums of money into judicial campaigns, especially on the Supreme Court and appellate level, hoping that the candidate they are backing will side with their particular philosophy when deciding cases and issues before them,” it wrote.

U.S. businesses ranked Louisiana’s judicial system last for fairness and reasonableness in a 2017 survey. Louisiana courts received an “F” when it came to judicial accountability, LABI points out.

“Instances of influence peddling and cronyism, along with the troubling lack of transparency in the way Louisiana’s judiciary handles allegations of misconduct, have contributed to our longstanding reputation for judicial unfairness,” Venable said.

Hughes previously was forcibly recused by a panel of judges from presiding over cases involving oil and gas companies because of the donations he’s received from a law firm that’s filed environmental lawsuits against the industry, according to The Advocate.

Allegations of influence peddling in judge races are not new to this year’s Supreme Court race.

The 2016 Supreme Court race between 15th Judicial District Court Judge Marilyn Castle and Third Circuit Court of Appeal Judge James “Jimmy” Genovese brought “into question the practice of electing judges and allowing their campaigns to be largely funded by law firms who already do or are likely to have cases coming before their courts,” David Blackmon wrote at the time for Forbes. “The U.S. Supreme Court has repeatedly noted that disproportionate spending by personal injury lawyers and other special interest groups on judicial elections threatens both the appearance and actuality of judicial independence.”

Blackmon also listed the political action committees and firms backing Genovese, most of which he noted also supported Gov. John Bel Edwards’ campaign for governor in 2015. Edwards has encouraged coastal parishes to sue oil and gas companies for environmental damages.

Changing the way judges are selected could improve the credibility of the bench, a Louisiana State University Law School professor said.

“Election of judges invites corruption,” Dr. John S. Baker, professor emeritus of Law at LSU, told The Center Square. “Merit selection of judges isn’t much better because it moves politics from the general public to lawyers or other elites. Nomination by the governor, confirmation by one house of the legislature, followed by a retention election is probably the best among the imperfect possibilities for choosing judges.”

To increase transparency and educate the public, LABI created a Civil Justice Reform Council, an amicus program, and a judicial program creating scorecards of judges.

LABI’s president and CEO, Stephen Waguespack, in 2015 pushed for reform measures to require judges to post financial disclosure statements and publish them online, similar to what is required for legislators and other government employees. LABI’s judicial program expands on these reform initiatives.

According to a recent report produced by the fiscally conservative Pelican Institute, lawsuit abuse in Lousiana has cost at least 2,000 jobs over a two-year period when the lawsuits were first filed in 2013, excluding jobs in the support industries. The report estimates the job losses account for more than $70 million in lost wages and between $43 million and $113 million in annual economic losses each year.

Additionally, state and local governments received $22.6 million less in royalty collections, which in some cases were offset by tax increases on working families, and offshore oil and gas exploration plummeted by more than 50 percent since the lawsuits were filed, according to the report.