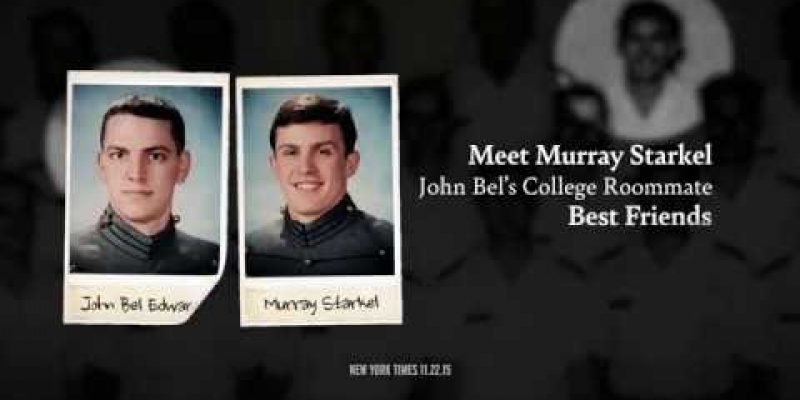 …you’ll be shocked but not surprised at the coziness of the connection. We’ve had several posts on the Starkel situation, noting the ad, as it was first run by Truth in Politics over the weekend, the fact that John Bel Edwards’ camp and Starkel himself, as represented by a law firm heavily tied to Edwards’ campaign and administration, screamed to the New Orleans TV stations demanding the ad come down, and then Edwards ran an ad claiming the ads had been taken down when they weren’t, then a second PAC dropped an ad talking about how Starkel was put in line for millions of dollars in lucrative coastal restoration contracts on the strength of little else than that he was Edwards’ roommate.

And then finally, the fact that members of the Louisiana House of Representatives are now demanding an oversight hearing into how Starkel managed to get on the approved bidder list for those coastal restoration contracts despite the fact he doesn’t have any employees or even a business office.

Not to mention that the former executive director of the Louisiana Coastal Protection and Restoration Authority (CPRA) issued a letter late yesterday stating that he thought Starkel’s inclusion on that list and the process put together for bidding on restoration contracts was unique – and not in a good way. Here’s that letter… 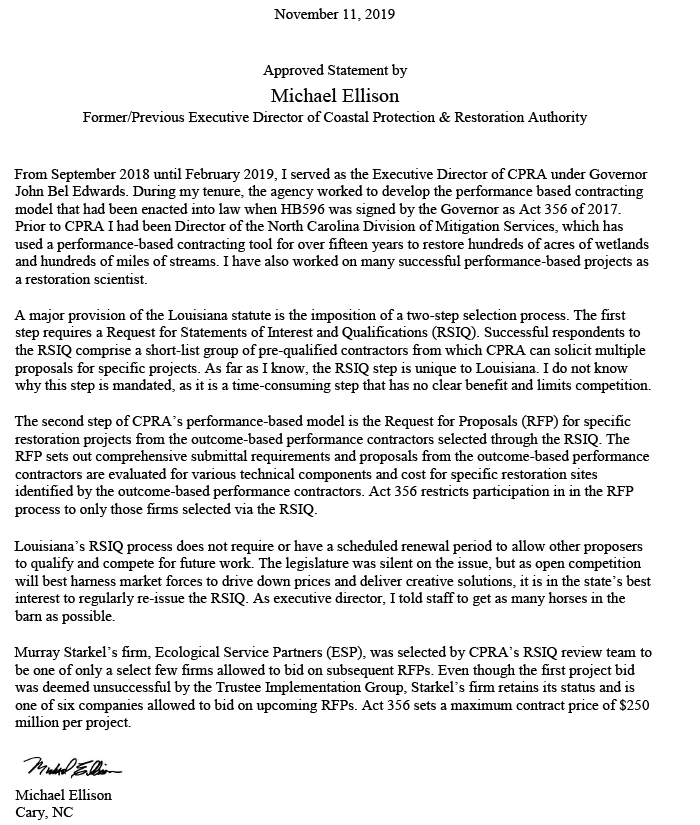 Given all of that, it’s pretty hard to claim, as Edwards’ camp does, that the ads are factually untrue. Starkel is in fact in line to win coastal restoration contracts up to and perhaps exceeding the $65 million the ad claims, even if he has not received any such contracts at this point.

And yet this morning, Edwards’ attorneys went judge-shopping in New Orleans and found a taker. They found this woman…

This would be Nakisha Ervin-Knott, who is a pretty well-known partisan Democrat judge in Orleans Parish – she’s got pictures on Instagram not just with John Bel Edwards but with Joe Biden, Liz Warren and lots of other party luminaries.

Bet that hearing was a real high moment in American jurisprudence.

So Edwards’ camp runs into court in Orleans Parish to find the friendliest judge imaginable, gets the hookup from her in an injunction forcing the Starkel ads off the air and now can claim that he’s won.

Maybe he’s right. But it seems to us that if the basic point was that John Bel Edwards’ entire administration is little more than a corrupt smash-and-grab operation in which all the “friends of the family” get to feed at the trough under each other’s protection and at the expense of the public, running to Nakisha Ervin-Knott, who’s nothing but a political ally and a pawn of the governor’s, to take the Starkel ads down is only further evidence of the truth of that narrative.

This thing is going out on appeal, though who knows how long it would take for an appeals court to lift that injunction. The election is Saturday. Sen. Conrad Appel, who’s involved in the Causeway Connection PAC which ran the second Starkel ad, had this to say…

“We disagree with the Court’s ruling today and believe that our ads are 100 percent truthful. The public deserves to know if the Governor’s best friend was engaged in backroom deals that have him poised to earn up to $250 million in state tax dollars. While we respect the process and the Court, the advertisements were legitimate free speech and fully sourced. Even the Governor’s former CPRA Executive Director issued a written statement confirming the truthfulness of our message. We will be appealing the court’s decision and are confident the truth will prevail.”

Oh, and in case you think this is a partisan shot at Judge Nakisha, let’s remember who she is. From the old New Orleans Times-Picayune, before it was bought up by John Georges and turned into a pure Edwards camp rag…

Judicial candidate Nakisha Ervin-Knott shot back Wednesday at one of her challengers for an Orleans Parish Civil District Court seat, saying Kris Kiefer’s campaign distributed material to the media and others that described her husband’s criminal past, while also urging Ervin-Knott to get out of the race. Karen Carvin, a political consultant for Ervin-Knott, said earlier this week that a campaign supporter received a packet of police reports and court records about Steven Knott’s conviction for five armed robberies more than a decade ago. The supporter, who Carvin said did not want to be named, said the reports came from Kiefer’s brother Nat, who conveyed this message: Drop out of the race and this material won’t go to the media.

A written statement released by Kris Kiefer’s campaign said the “decent and honorable thing to do was to advise” Ervin-Knott about their knowledge that her husband is a convicted felon, which they discovered in public court records. The campaign did this to spare the candidate and her family “any embarrassment or undue duress,” according to the news release.

Kris Kiefer, a son of former state Sen. Nat Kiefer, and Ervin-Knott are running for the civil court seat being vacated by Judge Madeleine Landrieu, who will take a seat on the state 4th Circuit Court of Appeal in January. Clare Jupiter, the former legal counsel for the Orleans Parish School Board, is also seeking the position.

On Wednesday, Ervin-Knott discussed her husband’s past during an interview with The Times-Picayune and during a news conference attended by supporters, including state Sen. Joel Chaisson and state Rep. Austin Badon.

The Times-Picayune anonymously received copies of police reports and court records Tuesday, along with a write-up about Steven Knott’s arrest in February 1998 for five Jefferson Parish armed robberies of drugstore pharmacies over a roughly three-month span. Knott served more than four years after pleading guilty that year, Ervin-Knott said.

Armed with a handgun, Knott, then in his late 20s, demanded pharmacy clerks give him Vicodin in each of the stick-ups, according to the police reports. Police in 1998 said he stole more than 2,500 pills.

We’re not going to say that Steven Knott can’t rehabilitate himself or that his legal problems, which apparently came before the two got married – though he was arrested a month after the two tied the knot – necessarily make Judge Nakisha a crook. But it is a bit unusual for a judge to be married to a convicted felon and it’s also a bit peculiar that said judge would have so much interest in covering for the potential corruption and possible illegality of a political ally that she would infringe on the First Amendment right to political speech.

It smells. Our readers know that smell.