We’ve said repeatedly here that possibly Louisiana’s worst problem is our penchant for setting, and accepting, miserably low standards for ourselves. We tolerate bad government almost like it amuses us, and we fail to summon up the proper indignation for terrible public schools, lousy roads, terrifying amounts of violent crime, alcohol and drug addiction, bad economic performance and on and on.

It’s what we tolerate which dooms us to place last in public policy metric rankings. And our politicians, at least many of them, have learned how to leverage those low expectations into power.

Edwin Edwards was perhaps the best example of the phenomenon of riding low standards into high popularity. He and his cronies stole the state blind and completely squandered the economic opportunities the 1970’s oil boom in Louisiana bestowed on the state; while Texas next door used the riches from black gold to build first-class basic infrastructure and set up a world-class tax code and business climate which allowed them to diversify their economy so completely that when oil went bust they kept on growing. But despite overseeing a dramatic loss of competitiveness, perhaps best seen in the number of corporate headquarters in Louisiana when he first took office as governors compared to that number when he finally left office on his way to the federal pen, Edwards survived on one-liners about his marital infidelity and personal corruption. There are still people, who don’t outwardly appear stupid or morally degenerate, in Louisiana who will tell you want a great governor Edwin Edwards was.

The current Gov. Edwards lacks Edwin’s ability to drop one-liners without sounding like a jerk. He can’t get by on personality, because his is vindictive and sullen. His political existence is more an accident than a reflection of talent. But John Bel Edwards banks on the low standards of the people of Louisiana more than anyone who has ever held that office.

And today we saw a perfect example of this. Here was a tweet by Edwards’ camp… 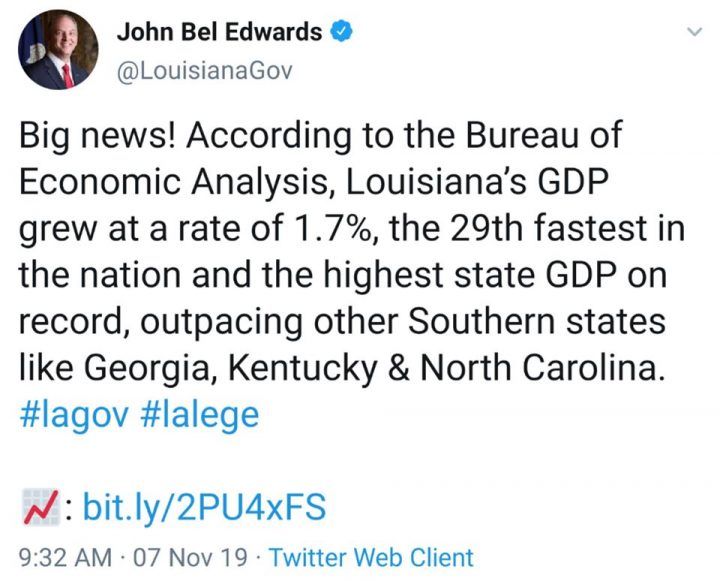 One point seven percent growth in the second quarter of 2019 is not an impressive number. At all. It’s below average. It’s well below that of our neighbors. 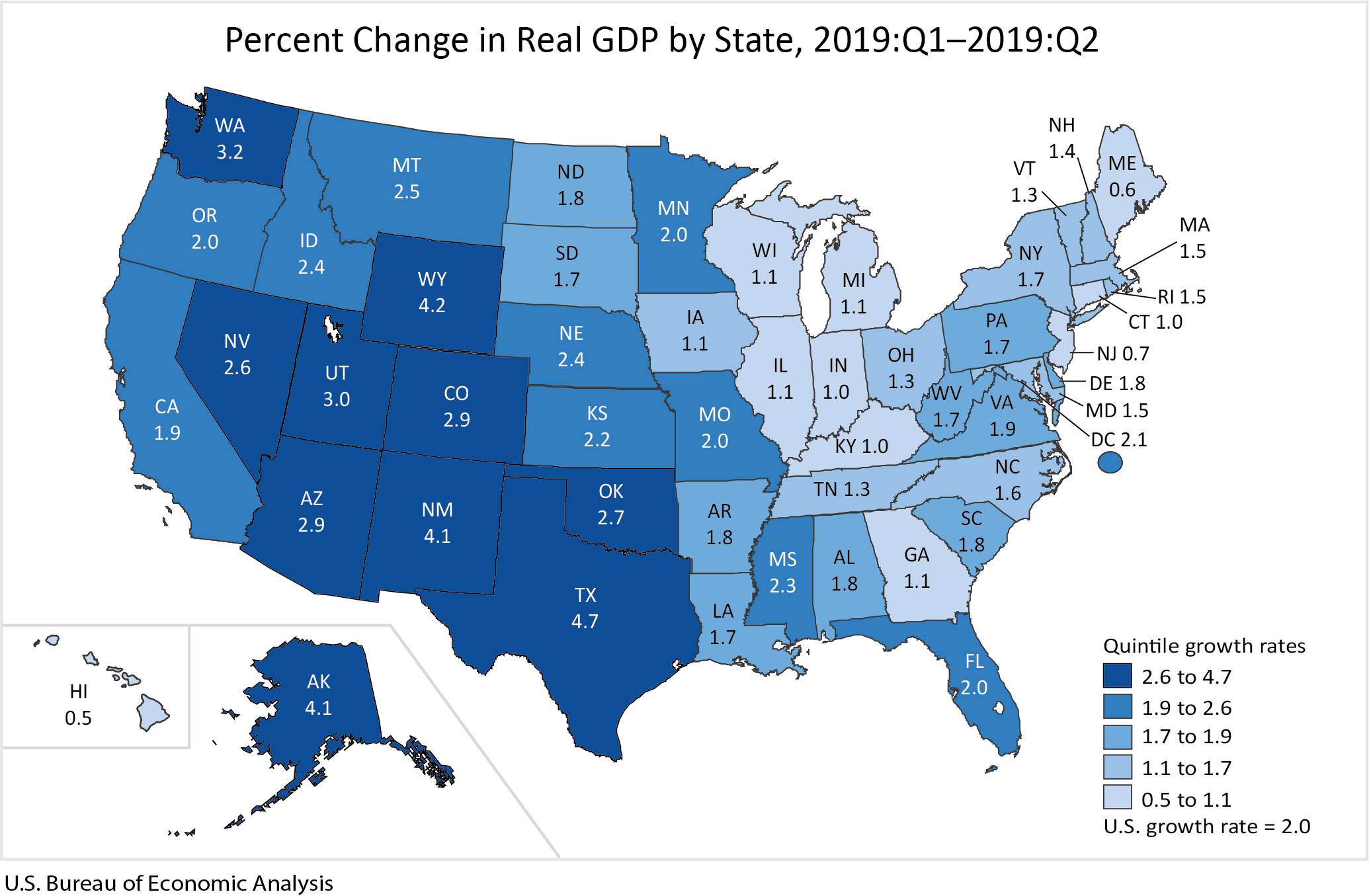 So the country grew by 2.0 percent and Louisiana grew by 1.7, and Edwards thinks that’s good.

Mississippi grew by 2.3 percent, for crying out loud, and Texas grew by a whopping 4.7 percent. Even Arkansas and Alabama outpaced Louisiana, if barely.

And John Bel Edwards is bragging about below-average economic growth.

Hilariously, today’s braggadocio is reminiscent of another statement by Edwards from back in June… 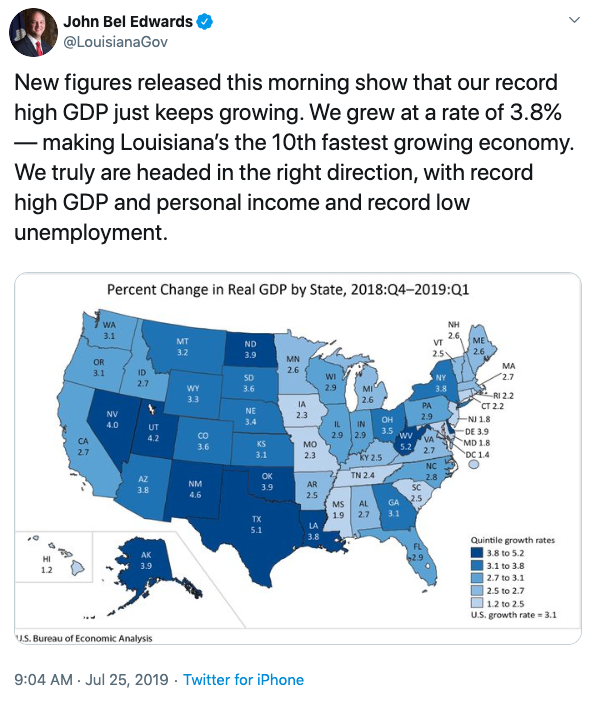 That growth figure was more like a dead cat bounce for the state, as it certainly wasn’t reflective of the state’s pattern of GDP growth. Louisiana grew at a 1.1 percent figure for the full year of 2018, which was hardly impressive but certainly a welcome improvement from having shrunk its economy in both of the previous two years, and now the quarterly growth figure is 1.7 percent. And yet Edwards seems just as excited about being 29th in growth as he was being 10th four months ago.

Which is interesting because Edwards, at the gubernatorial debate with Eddie Rispone two weeks ago, would not shut up about how Louisiana’s economy was a Top 10 national economy and was The Best In The South, despite the fact Texas still blew Louisiana away with 5.1 percent growth. It’s clear now, just as it was apparent when he spouted that nonsense, that Louisiana wasn’t in the midst of any colossal economic boom as a result of one stray quarter of good growth.

Speaking of the Top 10, here’s something else Edwards is running around touting as some sort of accomplishment…

Today, Site Selection announced Louisiana ranks among the Top 10 states in the U.S. for best business climate for the 10th year in a row. The magazine ranked Louisiana No. 10 in its 2019 analysis of the top locations for business investment and job creation. Georgia, North Carolina and Ohio held the top three spots in the magazine’s Top Business Climates ranking.

Site Selection bases its business climate ranking on both survey and performance measurements. Half the score results from a survey of corporate site selectors who are asked to rank the states based on their recent experience of locating facilities in them. The other 50 percent is based upon an index that includes total new projects year-to-date, both overall and per capita; state tax burdens on new and established companies; and performance in Site Selection’s annual Prosperity Cup ranking.

“Today’s ranking by Site Selection affirms Louisiana’s strength as a state with a strong and welcoming business climate,” Gov. John Bel Edwards said. “Through a mix of our highly skilled workforce, a world-class infrastructure, a cooperative state government, and bonds forged between employers and our higher education community, Louisiana ranks among the very best places to do business in the world. We have made tremendous progress in moving our state in the right direction, and we will remain vigilant in ensuring our people have new opportunities and that businesses can thrive in Louisiana.”

Is it good that Louisiana is 10th in Site Selection’s business climate ratings? Sure, we guess.

Y’know what’s better than 10th? Fourth, that’s what. And fourth is where Louisiana ranked in Site Selection’s rankings in 2015, the last year Bobby Jindal was governor of Louisiana.

Those won’t go away without a new leadership in charge of this place. They may not even go away then. But with Edwards it’s hopeless, because he exudes low standards all day, every day, and he’s willing with a straight face to simply lie about where Louisiana is on his watch.