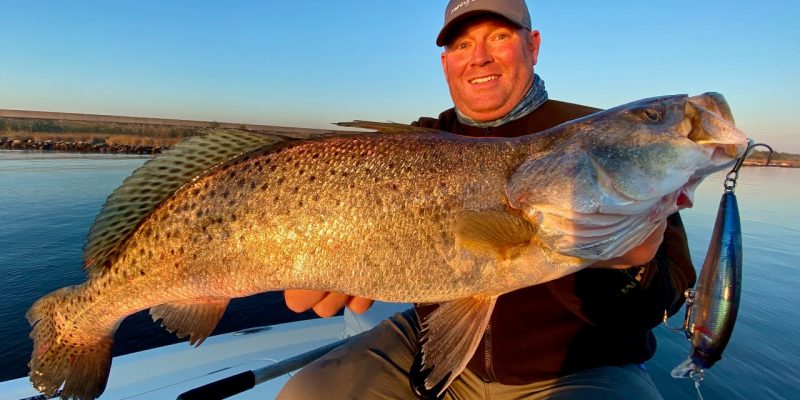 Earlier this week, my good fishing buddy Justin Bowles and I set off on a three-day fishing adventure that would take us to different areas along the Louisiana coast. The first stop on Monday morning was to one of the most heavily fished destinations in the entire state.

Every winter, speckled trout stack up in the Mississippi River-Gulf Outlet, a deep channel that was once used as a shortcut for ships to reach the port of New Orleans. Now dammed off, the MRGO sees no commercial traffic, but it often holds more recreational hulls than a boat show.

That’s because the depth of the water allows speckled trout to escape the shallow marshes, where temperatures can fluctuate wildly in the winter, often dropping to uninhabitable levels. The channel also acts as a conduit, ushering sexually mature shrimp out to the salty bays and Gulf, where they’ll propagate the species.

That confluence of mild water and bait makes the area irresistible to speckled trout, and some of the fish in the region are exceptionally large.

That was certainly true of one of the specks Bowles caught to start our trip. We netted it, videoed it, photographed it and released it before getting on a fast bite that resulted in a limit of speckled trout that weren’t nearly as big but still really good-sized. Those fish fell for holy joely Matrix Shads threaded on 3/8-ounce Deathgrip Jigheads.

Like the video? Please give it a thumbs-up, and subscribe to the Marsh Man Masson channel on YouTube. Also, leave a comment below. What are some of your favorite winter patterns for speckled trout? Do you find they consistently work, or do you have to frequently try new things to get fish to bite?