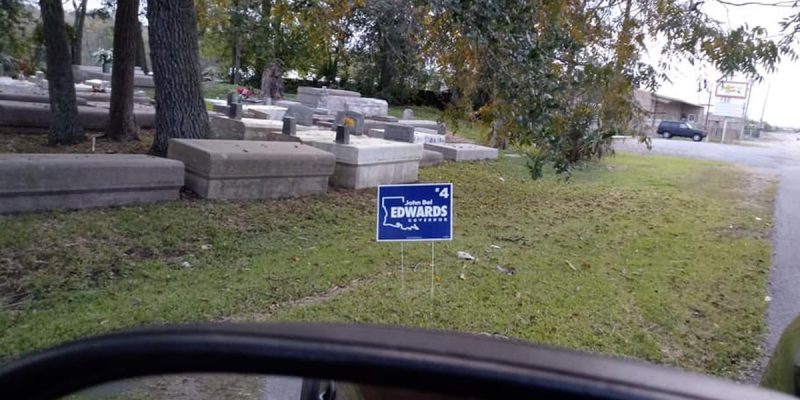 Seems like the public is starting to realize that the ongoing Governor’s race has descended into the gutter. The legacy media would have you believe that this unfortunate development is due to both candidates’ last minute attempts to drum up extra votes, but that isn’t correct. Fact is, it’s one candidate and his allies who are responsible for the false accusations poisoning the airwaves in the last week or two. That candidate’s initials are JBE.

The claim that both candidates are at fault for the gutter politics is actually just a servile press covering the JBE’s last desperate moves to salvage a second term from the wreckage of his first.

Just to point out a few of the more ludicrous claims, the Edwards’ campaign and various PAC’s and out-of-state organizations of dubious repute have been falsely attacking Eddie Rispone for, among other things, supposedly:

And that’s just a few of the more outrageous lies and falsehoods that these groups are regularly airing or printing on their their mass media campaign, social media, flyers, street signs, live calls, and robocalls from left wing organizations and unions, mostly from outside Louisiana.

This level of totally unfounded sleaze was more typical of old-style Louisiana gubernatorial campaigns from the early to the mid-20th Century, a campaign style which we had all hoped was as dead and buried as Huey Long is, seeing as though he’s pushing up daisies on the state capitol grounds. (Yes, I’m well aware of the awfulness of the 2015 campaign, but that was a different dynamic about lifestyle issues and personalities, which is not what I’m talking about here.)

Absolutely every single one of these accusations against Eddie Rispone is utterly and completely false, of course, but what’s truly amazing is the fact that these lies and falsehoods spring straight from the campaign of an incumbent Democrat governor rather than some hopeless bomb-throwing minor candidate. So why has his campaign descended to this level? Well, I believe there are two major reasons:

The first is the plain fact that John Bel Edwards is desperate and doesn’t have a very good record to stand on.

After all, he really did break his 2015 campaign promises.

He really did sharply raise taxes after making outrageous threats to the voters, which was a big “surprising” change after spending the whole 2015 campaign swearing he wouldn’t need a tax hike to straighten out the state’s budget.

And he really did greatly increase the cost of running our state government, while making almost no provision to fix our schools, roads and infrastructure. You’re getting the same bad government for $34 billion a year that you got for $25 billion, and somehow JBE wants you to believe that he’s “fixed” Bobby Jindal’s mess.

When you don’t have a good record to stand on, just deflect attention elsewhere – that’s a standard political tactic. But making totally baseless allegations against an opponent? Now that’s an old school Louisiana specialty!

What’s worse is the target audience for JBE’s lies is his own voting base, vulnerable populations of minorities, the elderly, the poor, the uneducated. He’s trying to scare them into voting for him, which is a really ugly, sad spectacle.

But the second reason is fundamentally the more sinister of the two, and it relates directly to just who John Bel Edwards is and from whence he came.

After several generations of slaveholding and then exploiting both white and black sharecroppers, the Edwards’ family turned to running the courthouse mob in Tangipahoa Parish. How justly they ran the parish can be easily inferred from the name “Bloody Tangipahoa,” which phrase was current in the early 20th Century. JBE’s grandfather, Frank Millard Edwards, was the sheriff of Bloody Tangipahoa from 1928 to 1948.

It was only to be expected that the family would be ardent segregationists, but what few outside Tangipahoa Parish may know is that the Edwards’ family helped lead the segregationist cause in Louisiana well into John Bel Edwards’ youth.

Time was running out for segregationists by then, but recall this was just about the time that John Bel Edwards was learning at his grandfather’s knee, by his own admission. This learning apparently included all of the old Louisiana political vices, such as physical and legal intimidation and the frequent use of totally unfounded and unsupported allegations against political opponents.

Inevitably, there was a price to be paid, mostly by the residents of poor, corrupt Tangipahoa Parish, but occasionally by members of the Edwards’ family, as federal investigators periodically made their presence felt, right up to the present day. (John Bel’s younger brother Sheriff Daniel Edwards is under federal investigation as I write this article, and his father Frank Millard Edwards, Jr. was targeted by ATF for a host of allegations, which are described in a surprisingly readable federal district court document you can see here.)

So it’s always been in JBE’s political DNA to resort to intimidation and false accusations. One can’t simply expunge six or seven generations’ worth of nasty political practice, especially when the scion of the family is a rare modern-day Louisiana Democrat Governor fighting for his political life.

So that’s how we got where we are today, and it certainly isn’t Eddie Rispone’s fault. Eddie is a good man from humble circumstances, a very successful businessman with a reputation for integrity and a singular devotion to bettering the circumstances of our poorest children. He has absolutely nothing to gain from being the Governor of Louisiana but a lot of headaches and perhaps the eventual satisfaction of having cleaned up a mess he didn’t create.

Contrast Eddie Rispone to John Bel Edwards, a man whose lust for power was instilled him for generations and apparently knows no bounds, and your choice for Governor of Louisiana becomes obvious.