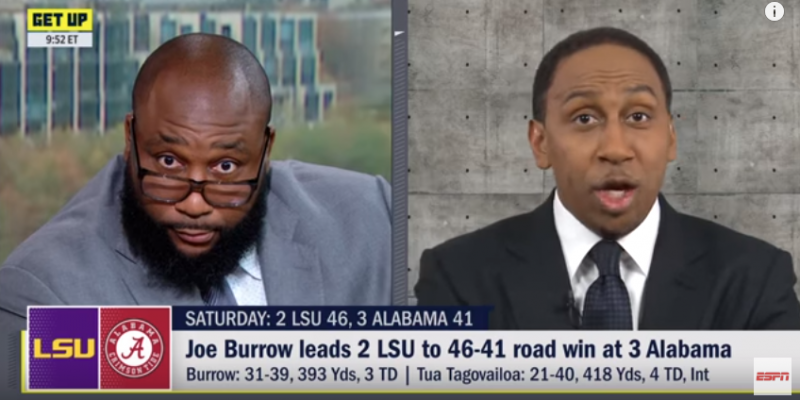 ESPN commentator Stephen A Smith is known for being one the network’s most visible examples of its create-a-debate platform.

On Tuesday he got absolutely silenced by former LSU Tiger Marcus Spears.

The total sports network has long sold its soul, trading in the traditional highlight format of its top shows to one of debate and controversy among people who had better at least appear to have strong, vitriolic opinions about things. Smith is indeed one of, if not the, most notable representation of this approach. There are some days where he is calm and collected; there are some days, like today, like this entire prelude to and post-game analysis of the LSU-Alabama game, where he is so obnoxious that you literally have to turn off the TV to return to some state of mental equilibrium.

On Monday, Smith sat with former Tiger Ryan Clark and discussed how “lucky” LSU was to beat Alabama. He pointed out individual plays throughout the game that, had they not happened, would have, in his mind, produced a different outcome: Tua’s fumble on the first drive, the muffed punt snap, and, among others, the decision by Coach Saban to push the field right before half, which turned into an interception for the Tigers and a second touchdown in just 26 seconds before halftime. Here is that segment:

Clark was gracious and cool during the debate, not returning the disrespectful face contortions Smith was giving him. Of course, this I-don’t-care-what-you’re-saying-right-now posture is part of Smith and ESPN’s shtick to keep people watching. Still, Clark’s professional approach did nothing to shift Smith’s attitude or opinion on the LSU-Alabama game.

With respect to Clark, with Spears in the room, it was game on.

Yes, this is created drama for television. Yes, this is entertainment for entertainment’s sake, a full three days after the game in question had concluded. But witnessing Spears not only use the same reasoning skills as Clark did yesterday and combine it with Smith’s very own attitude and, yes, obnoxiousness, was as satisfying as anything, except of course 46-41.

It makes me wish someone would do the same to Pardon the Interruption co-hosts Michael Wilbon and Tony Kornheiser.

In the best blow to Smith’s inflated ego, Spears actually called “Big Money Stephen A” out for getting a raise from ESPN. He called him out for making excuses for a losing team when Smith wouldn’t make those same excuses for people below him not getting a raise.

He called him out for something Smith himself taught him in his ESPN office once before: “Champions don’t make excuses, damn it!”

Spears’ good-natured–but honest–attack on Smith ends at the 4:42 mark, with an applause from show host Mike Greenberg and several studio workers in the background.

“I have no comeback.”

Everyone was laughing, even the defeated Smith. Spears was raising his arms in victory. He had won. The loudmouth who always likes to stick it to people unnecessarily had effectively been silenced for a change.

Yes, it was all staged, it was all the typical ESPN comedy. But it sure was nice to witness yet another LSU victory. Like the President who showed up at the game Saturday, it just seems these Tigers just can’t stop winning.