This afternoon there was a pretty serious blow-up in Shreveport over a stance that city’s left-wing, ethically-challenged Democrat mayor Adrian Perkins took about whether he’d cooperate with the usual interagency security arrangements common to a presidential visit.

Perkins’ answer was no, he wouldn’t send police and fire personnel across the Red River to help with security for President Trump’s rally tomorrow night in Bossier City. What usually happens is local first responders pool resources throughout a region where a presidential visit will be made so that those first responders in a particular jurisdiction won’t be completely overwhelmed by having to handle security on their own.

This isn’t so much an issue with having enough cops and firemen available at the scene of a rally. It’s that if the Bossier City police and the Bossier Parish sheriff’s office and the fire departments have to be the only ones staffing the event and then something else happens, you run into manpower problems. So spreading the burden among law enforcement people enables the jurisdiction involved, Bossier City in this case, to still maintain an ability to provide emergency services.

Not to mention it’s federal law that local jurisdictions are to provide support when the president is in their area. That’s found in Title 18, Section 1752, sub-section 1550 of the U.S. Code, which reads…

Section 1752 of Title 18 does not supersede any existing State or local laws regarding the maintenance of order and the protection of persons and property in any jurisdiction. Accordingly, all State and local criminal laws remain available as a basis for concurrent jurisdiction for enforcement, investigative, and prosecutorial involvement by State and local criminal justice agencies over conduct which constitutes a violation of State or local law as well as a violation of § 1752. Local law enforcement agencies continue to have the responsibility to assist in providing protection to the President while the President is visiting their localities, to conduct criminal investigations involving violations of State and local statutes which result from a Presidential visit, and to furnish police officers in adequate numbers to control demonstrations and other disturbances occurring in close proximity to places where the President is visiting. S. Rep. No. 91-1252, 91st Cong., 2d Sess. 9-10 (1970).

Difficulties in proving the elements of guilty knowledge or scienter required for violation of the Federal statute may leave local action as the only effective recourse in many instances, unless previous removal from the restricted area, other enforcement encounter, or special circumstances are present and serve to prove the defendant acted willfully and with knowledge.

So when the President comes to town, even if he’s coming to the next town, you cooperate and you send some first responders to make sure there’s enough security at the event – more as a courtesy to the folks in the next town than to the President, even though it’s the federal government the President runs which provides a big chunk of your funding.

For example, Shreveport has the only bomb-sniffing dogs in Northwest Louisiana, thanks to a grant from the federal government.

Despite all this, it looks like Adrian Perkins’ first instinct was to deny police protection. 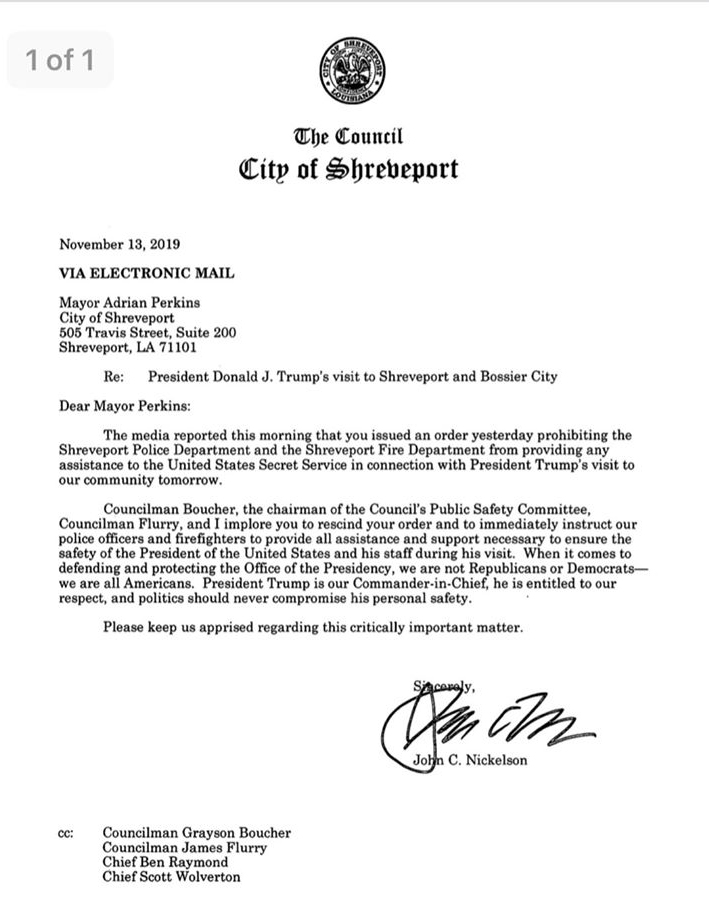 And boy, did that touch off a firestorm. 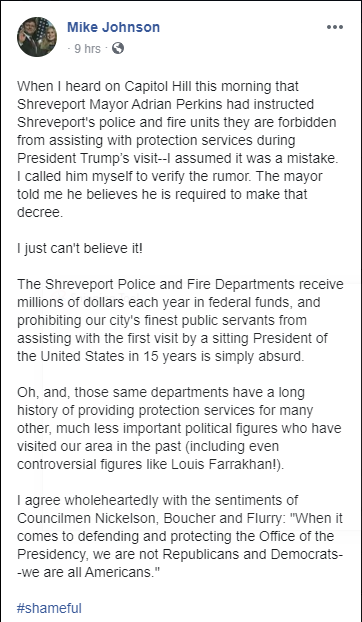 That put Perkins in crisis mode, and he sent his press flack out to try to throw water on the controversy. But it was a swing and a miss… 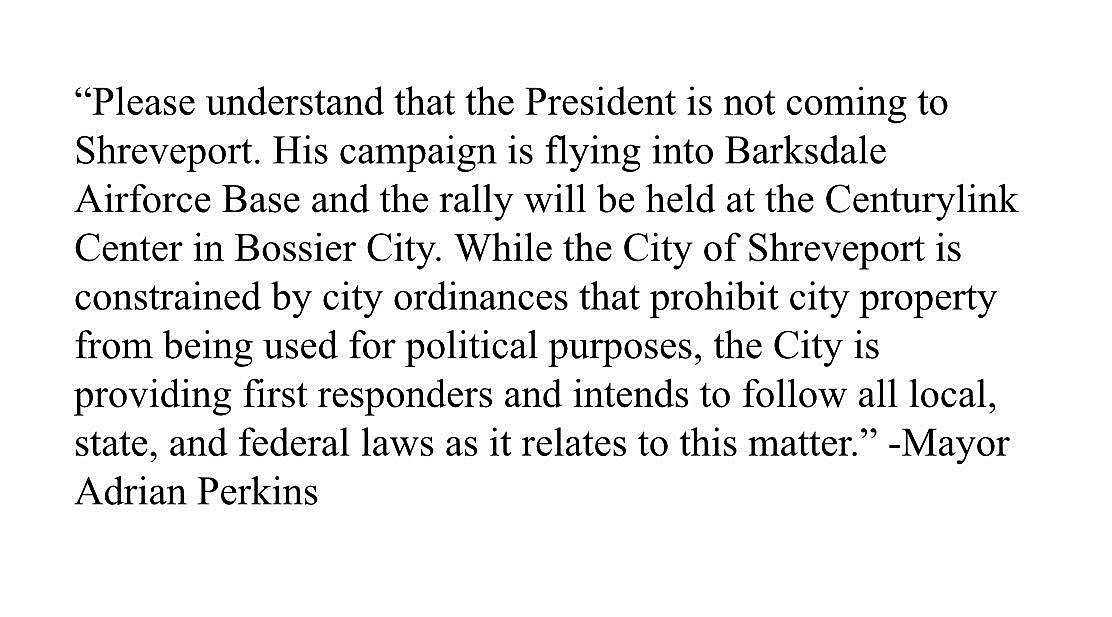 Then Perkins sent out a letter… 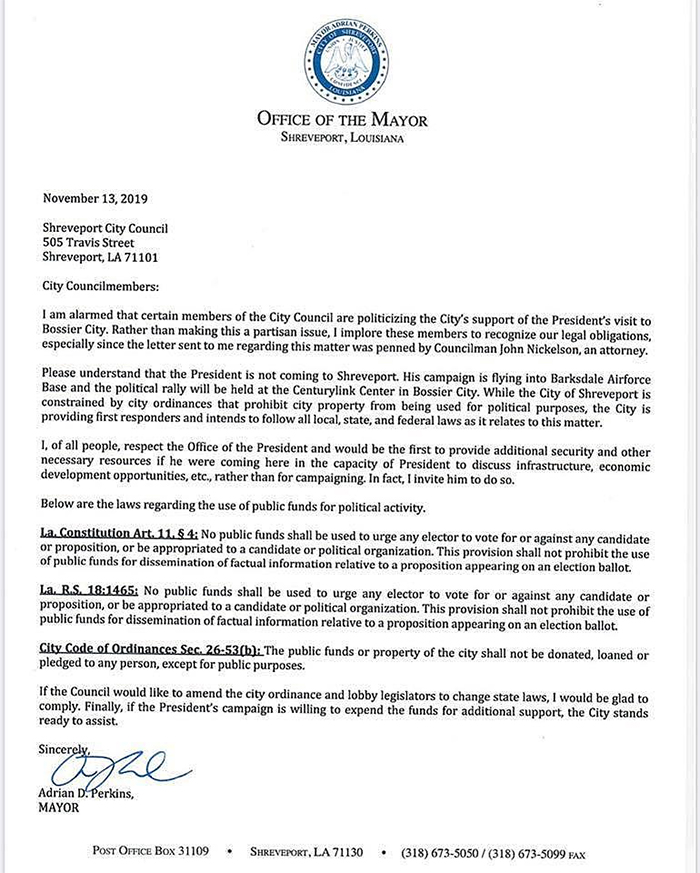 Understand that the federal law we just quoted above supersedes all of these state laws, for the simple reason that a presidential visit, even if its purpose is political, is treated as a matter of state and not politics. That’s pretty obvious and common-sense stuff, but it apparently escapes Adrian Perkins.

It’s a bad look when he says all this was the rumor mill running out of control, because Mike Johnson and Alan Seabaugh are not the types to fly off the handle without the facts. Perkins had to back down because he’d bitten off more than he could chew, and Shreveport was about to become the only city ever to refuse to help with presidential security.

This was not the kind of thing Perkins’ pal John Bel Edwards, who will be in Shreveport earlier in the day Thursday (something he did last week in Monroe, to exceedingly poor effect when he held a rally with 200 people there in advance of a Trump rally with a crowd well in excess of 10,000), wanted to have hanging over his head. One wonders if Perkins didn’t get a call from Edwards’ camp asking him if he’d lost his mind. He did have something of a whipped-dog look about him in that press conference.