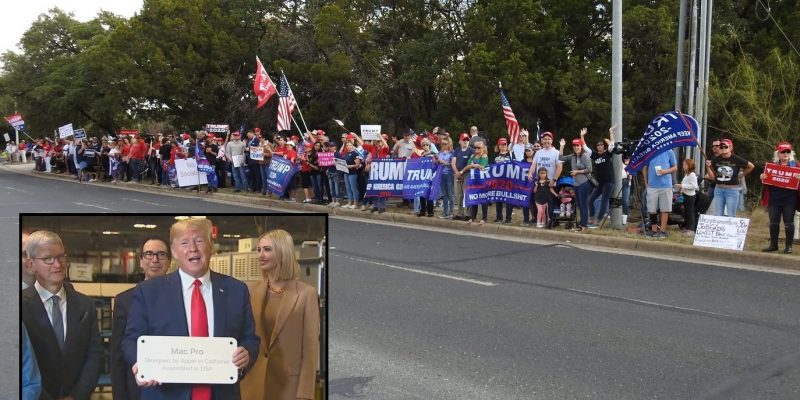 AUSTIN — President Donald Trump toured the Flextronics plant in Austin Wednesday, in which a new MacPro processor will be manufactured.

The new MacPro model will be assembled in Austin following an exclusion to recently imposed higher tariffs on certain Chinese-made components.

Alongside Tim Cook, Apple’s CEO, Treasury Secretary Steven Mnuchin, and Ivanka Trump, the President engaged in what can be interpreted as part-victory lap for domestic manufacturing — up significantly during his first term — and part-promotional visit as the U.S. continues trade negotiations with China ahead of an anticipated landmark deal.

The President was in and out of Austin in a single afternoon via Air Force One, greeted by around 200 supporters. The scene outside the plant featured nearly 300 supporters of the President lined up along a nearby street, who outnumbered liberal demonstrators at least three-to-one.

According to Bloomberg News, Trump has been cozying up to tech sector leaders in recent months, including an off-the-radar White House dinner with Facebook founder Mark Zuckerberg and twice with Cook at a Trump golf club property in New Jersey. Cook previously attended a state dinner hosted by Trump in 2018 for French President Emmanuel Macron.

A month after Trump’s second golf club meeting with Cook, the administration agreed to Apple’s request for tariff waivers on 10 of 15 Chinese-made components — a shift from a stance announced by Trump in July that the company’s requests would be denied and that it should make all parts in the U.S., according to Bloomberg. However, the administration denied Apple’s requests for relief on certain other products that are more easily produced in the U.S.

From the hip: While the President’s visits to Austin have been in the past attended by the city’s liberal leadership, this visit was more policy-oriented in nature. As such, Trump was greeted at the Austin by Lt. Gov. Dan Patrick and Atty. Gen. Ken Paxton, both Republican stalwarts and supporters of the President. No city or county officials could be identified. The tour of the plant was open to the media and a handful of VIPs only, and Trump was flanked by Republican Congressional members including John Carter and Bill Flores.

As a primarily political event, the optics could not have been better outside the plant for Republicans in typically liberal Austin — where conservatives fare about as well at the ballot box as Democrats do across the rest of the Lone Star State (the 40% range). Even with the impeachment hearings going on that morning and a Democratic Debate taking place that evening, Trump supporters overwhelmed the anti-Trump protesters. Organizers of the pro-Trump rally say the demonstration of support was organized in less than 24 hours. Whether that has any bearing on 2020 prospects has yet to be seen, but it can’t hurt Republicans.