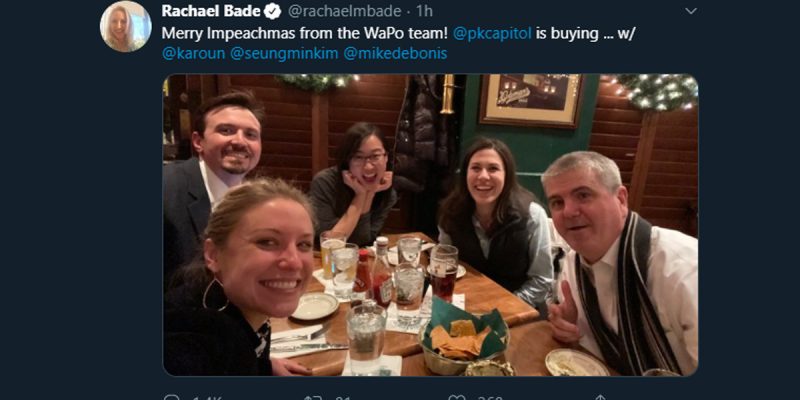 With the impeachment of President Donald Trump, the U.S. House of Representatives sent a clear message to the American people. Despite the many problems in our country, the top concern for House Democrats is to punish President Trump. His true “crime” is being an outsider, an advocate of “America First” policies and a President committed to “draining the swamp” in Washington D.C. His values make President Trump the enemy of the Deep State, the media, the Democrats and their allies in Hollywood.

After his unfair, rushed and completely partisan impeachment in the U.S. House of Representatives, the Trump haters exploded in celebration. In fact, it started before the official vote was taken. The night before impeachment, House Intelligence Committee Chairman Adam Schiff (D-CA) enjoyed drinks and dinner at Charlie Palmer, an expensive Washington D.C. steak house. Presumably, this solemn occasion did not prevent Schiff from partying with friends.

On impeachment day, the so-called somber attitude of House Speaker Nancy Pelosi (D-CA) and her House Democratic colleagues was just a façade. Pelosi wore black on impeachment day to try to convince Americans that she was “sad” about the proceedings; however, Democrats were downright giddy about impeaching President Trump. Right after an article of impeachment was passed, House Democrats started cheering. It was so inappropriate that Pelosi was forced to shut down the celebration with a stern and admonishing stare.

After both articles of impeachment were passed, without a single Republican voting in support, there was no stopping the rejoicing among members of the left-wing media. Five liberal activists masquerading as journalists from the Washington Post enjoyed a festive meal with pints of beer and spinach dip. On Twitter, reporter Rachel Bade, who also contributes to the progressive cable news network CNN, shared a photo of the group with the title “Merry Impeachmas.”

The condemnation was certainly warranted. The media celebration shows that these journalists are anything but fair and objective. Their liberal agenda is apparent from the biased coverage of President Trump. No other politician in American history has received such unfair treatment from our supposedly neutral journalists.

After the firestorm of criticism, Ms. Bade changed the caption for the tweet and tried to explain the inappropriate image. She said, “I’m deleting a tweeting tonight that is being misinterpreted by some as an endorsement of some kind. To be clear, we at the Post are merely glad we are getting a break for the holidays after a long 3 months. I will retweet the group photo w/ a better caption!”

Of course, in truth, Ms. Bade and her colleagues are “glad” that the President was impeached. Bade’s tweet reveals what conservatives have long known about the Washington Post.  It is a major part of the mainstream media which strongly affiliates with the Democratic Party. The liberal media and the leadership of the Democratic Party not only share the same principles, but they also coordinate their political messaging. Quite often, Democratic Party leaders and journalists use the same words to describe the President and this outrageous impeachment nonsense.

A similar belief system is shared among the Hollywood industry. After the President’s impeachment, progressive stars like Rosie O’Donnell, Cher, and Alyssa Milano erupted with relief on Twitter. Rob Reiner, who starred as “Meathead” on the All in the Family TV show, claimed that the President was impeached because he “committed the High Crimes of Abuse of Power and Obstruction of Congress.”

These liberal celebrations will be short-lived for the President will surely not be removed by the U.S. Senate, no matter when they finally receive the articles of impeachment from Speaker Pelosi. These Democrats will regret their insistence that the President be impeached, for the entire sordid affair will only guarantee his second term. Current polls show that most of the American people do not approve of the Trump impeachment and do not want to see the President removed from office.

As he runs for a second term, the President will use impeachment as a political weapon to wield against his Democratic Party opponents. On Election Night 2020, after impeachment helps the President secure another four years in office, the smiles will be wiped off the faces of liberals and “The Deplorables” will be celebrating once again.