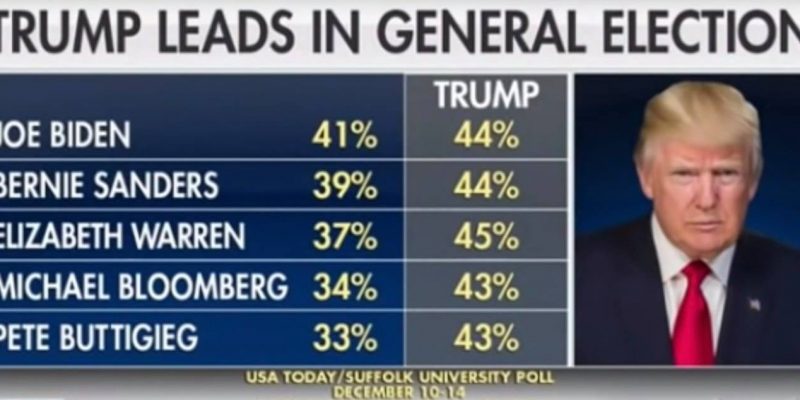 A new poll from USA Today and Suffolk University is alarming liberals as it shows President Donald Trump defeating all five major Democrat candidates for President in next year’s election.

The poll of 1,000 registered voters was conducted from December 10-14 and shows President Trump beating all his major 2020 opponents by 3%-10%. The results are as follows:

It is important to note that President Trump won the 2016 Election with just over 46% of the popular vote, a number that is within the 3% margin of error of the poll.

The development is great news for Republicans who continue to fend off Democrats’ relentless push for impeachment which appears to be backfiring as polls trend in the President’s favor.

At the same time, President Trump is likely pleased with the 50% job approval rating among likely voters in the newest Rasmussen poll released Friday. Making the result more impressive is the word “likely” as opposed to “registered” voters, a metric believed to be more accurate.

Lastly, internal polling released by the Trump campaign reveals that the thirty Democrat members of Congress who voted for impeachment but represent districts that voted for President Trump are facing an electorate which is opposed by an average of 5%.

Sharing that information via social media the President declared,

“Nancy has walked her entire majority caucus off the plank. See you in 2020!”