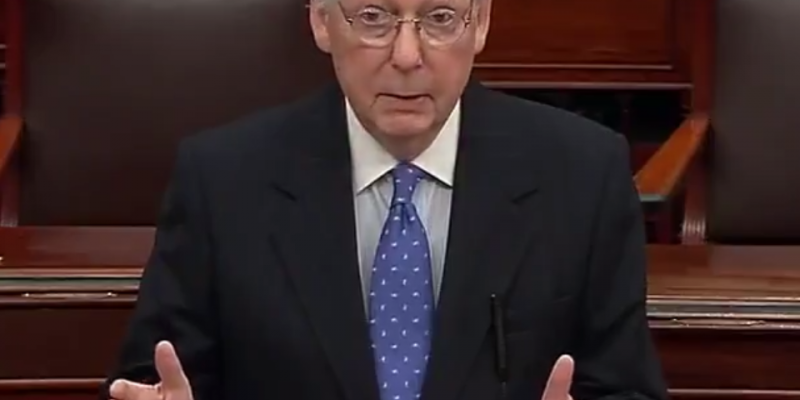 The allegations made against Trump do not amount to high crimes and misdemeanors, McConnell says, adding that Democrats were determined to impeach Trump as soon as he was elected.

“The House’s conduct risks deeply damaging the institutions of American government,” he said.

The first charge, which was disproven by witnesses, was Trump asking the Ukraine to investigate Joe Biden’s quid pro quo with the Ukranian government and its financial involvement with his son, Hunter Biden. The second charge, includes obstruction of Congress, which was also disproven and in many instances, impeded by House Democrats who would not allow Republican involvement or witnesses.

House Speaker Nancy Pelosi late Wednesday said she refused to send the articles of impeachment to the Senate, saying she “wants to see what happens over there” first. (This is irrelevant. The Senate’s investigation is not dependent on what she does or does not do.)

McConnell replied, “Pelosi suggested that House Democrats may be too afraid to even transmit their shoddy work product to the Senate.”

Citing the country’s founders, McConnell said the authors of the U.S. Constitution knew that setting such a low bar for impeachment would create chaos.

Pointing to the investigation into President Richard Nixon, which lasted 14 months before the impeachment process began, and year-long process for President Bill Clinton, McConnell said the Democrats’ weeks-long process was “rushed and rigged.”

McConnell said the allegations against Trump are so unproven, “if the Senate blessed this impeachment, we will invite the impeachment of every future president.”

McConnell said it’s clear “what the Senate must do.”

“It requires the Senate to fulfill our founding purpose,” he said. “This is as grave an assignment as any given to any branch of government.”

“By the speaker’s own standards, the standards she set, she’s failed the country. The case is not compelling, not overwhelming, and as a result, not bipartisan.”

Senate Majority Leader Mitch McConnell: "By the speaker's own standards, the standards she set, she's failed the country. The case is not compelling, not overwhelming, and as a result, not bipartisan." https://t.co/8nwb3lXvv1 pic.twitter.com/lySNZFWXeY