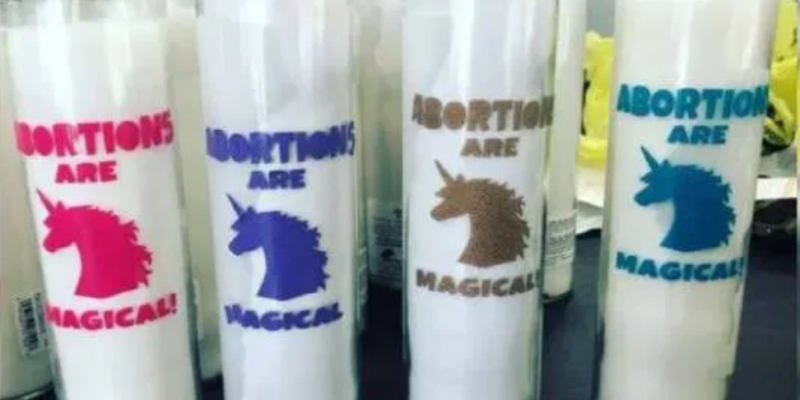 The Texas Equal Access (TEA) Fund is handing out candles decorated with unicorns reading, “Abortions are magical” to volunteers at a holiday party.

In a Facebook post earlier this month, the group advertised the candles as “a token of appreciation” for its volunteers.

TEA argues, “Abortions are magical for most people who have them and refuting that just increases stigma around abortion.  They are health care, self-care, and community care.”

Getting our holiday party favors ready! Every year we honor our volunteers and make sure they get a token of appreciation at our annual holiday party.

TEA is one of several abortion groups in Texas that pays for abortion costs, averaging around $300. According to its website, TEA states,

According to its website, TEA does not discuss the option of not having an abortion and having the baby, or provide resources to assist the woman with pregnancy.

Prolifers criticized the group, arguing abortion is not “magical” but ends human life.

“The extreme stance of TEA is unfortunately not rare for anti-Life groups in Texas,” Texas Right to Life argues.  “Earlier this year, a similar ‘abortion fund’ hosted an event at which, among other crimes, mothers were encouraged to bring abortion pills across the border from Mexico and minor girls were taught how to undergo a dangerous “DIY” without their parents or law enforcement finding out.”

“Abortion activists want death-on-demand, and they want you the taxpayer to foot the bill,” Texas Right to Life argues. “Abortion has decimated generations in our country, and the carnage will not stop because radicals like these will not stop. Abortion is not ‘magical’ because killing a human being is not magical, covering up the abuse of young girls is not magical, and death for profit is not magical.”

Interested in more news from Texas? We've got you covered! See More Texas News
Previous Article We’ll Be Winding Down The Hayride For The Holidays, So…
Next Article BAYHAM: For Festivus 2019, Rigged Refs And A New Hope