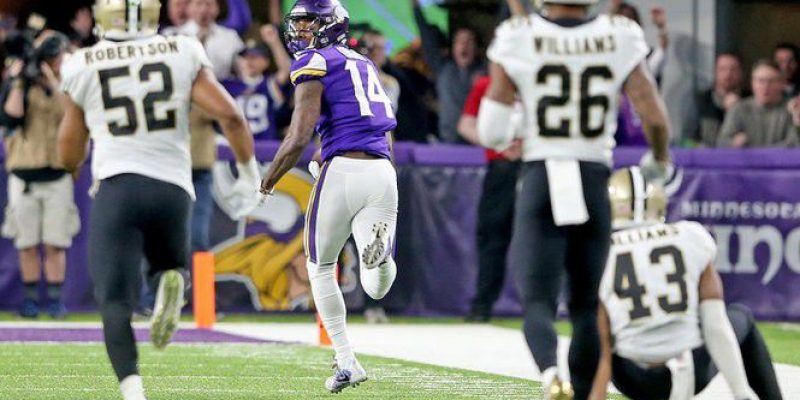 The demon. The Minnesota Vikings.

If history runs true this coming weekend, Saints fans should brace themselves for any number of volatile emotions.

New Orleans is favored in its first round playoff game against the Vikings on Sunday. If the Vegas prediction holds true, perhaps a Saints victory will be one step in exorcising a demon of two years of playoff frustration–including an improbable loss to the Vikings two seasons ago.

But that 2018 affair is far from the only game of playoff impact in this small-sample yet intense rivalry. Indeed, three of the games have involved league history-defining moments.

The Saints’ very first playoff appearance after 21 years of existence occurred after the 1987 season, after a heavenly 12-3 run and honorable second place finish to Joe Montana and the powerful 49ers.

Hopes were high in the Superdome that January 3 day in 1988, especially when the Saints came out with guns blazing with an emphatic defensive stop and subsequent touchdown to put New Orleans up 7-0. The ‘Dome was rocking, and owner Tom Benson was surely having visions of a postgame dance with his victory umbrella.

Mere hours later the Saints were looking up at a scoreboard that read Vikings 44, Saints 10.

Two regular season affairs between the teams over the next three seasons seemed to twist the knife of that first playoff loss all the more deeply: Vikings 45-3 in 1988, Vikings 32-3 in 1990–both Saints defeats in that dark and irritatingly loud Metrodome.

Of course the noise is never irritating when it’s in the Superdome, and the Saints would reach a milestone in the organization’s history on January 24, 2010 when they scored a 31-28 overtime victory over Brett Favre and the scarily good Vikings to advance to the Super Bowl.

Any football fan knows what happened two weeks later in Miami. It was that victory over the dreaded Vikings that propelled the Saints to its first and only world championship.

It had been a long time coming from that first playoff defeat in 1988. Twenty-two long years that placed Minnesota directly in the path of Saints’ fans dreams of a Super Bowl.

There was, admittedly, one other playoff game between the teams in 2001, but there is no intrigue to discuss in that one, except that the Saints simply couldn’t stop receivers Randy Moss and Cris Carter. No real drama or interest story here: Vikings, 34-16.

But whatever drama the 2001 game lacked was certainly compensated for in January 2018, when the miracle of all miracles and choke of all chokes won the game for Minnesota, 29-24. It nullified a gritty Saints comeback on the road, and quite possibly derailed another New Orleans Super Bowl appearance.

That demon may very well live on forever….

Saints-Vikings. They don’t meet on the field that often. Only four times in playoff history. But amidst those four games were a first playoff appearance, a first Super Bowl victory, and an end-game miracle that will unfortunately make every NFL top-10 list for the next hundred years. For Saints fans, it has been a mix of vexation and victory, mostly vexation. It is why Sunday’s clash, even though it is in the friendly confines of the Superdome, can seem so ominous. The Minnesota Vikings, even though 1988 and 2001 and 2010 and 2018 are nothing but history now, just seem to have this aura about them that can scare a Saints fan more than a Voodoo curse.

Let’s just hope that come Saturday Brees and the boys can bring the city a blessing that maybe, just maybe, can be one step toward exorcising that purple Viking demon.