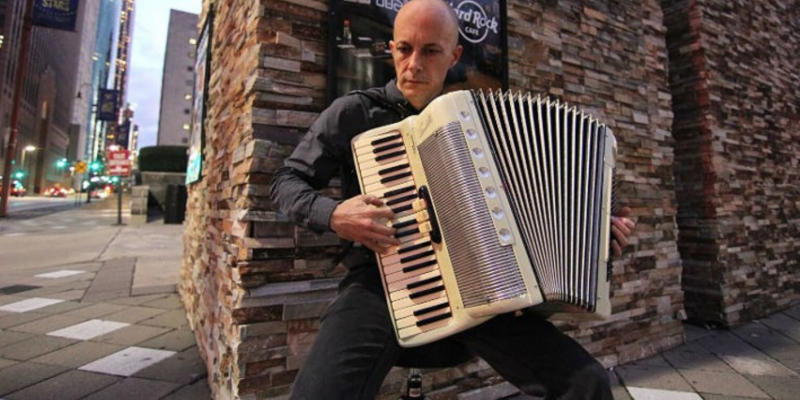 A Houston accordionist is suing the city, arguing an ordinance prohibiting him and other musicians from playing music in public spaces for tips, otherwise known as busking, is unconstitutional.

“HOUSTON, TEX., CODE art. I, § 28-6 prohibits playing music with the view of taking up [money], everywhere but a small part of the City known as the Theater District, and only then after obtaining a permit that contains a ‘Heckler’s Veto’ provision,” the complaint states.

In Anthony Barilla v. City of Houston, the complaint notes that the city of Houston is 665 square miles, whereas the Theater District covers eight blocks.

“This extremely limited area excludes many of Houston’s dynamic cultural centers that lend themselves to busking,” the lawsuit states.

In order to perform in these eight blocks, performers must obtain a permit, and pay a $10 fee for 30 days or $50 fee for one year. They must also obtain written permission from the abutting property owners of the site where they intend to play.

Anyone who busks outside of the Theater District, or without a permit inside the district, is subject to a fine of up to $500 per violation.

Tony Barilla, an accomplished accordionist and member of a three-piece accordion cover band, is challenging the busking ban and permit requirements, arguing they violate the First Amendment’s free speech clause. For more than 20 years, he has written and recorded music for the nationally syndicated NPR podcast, This American Life.

“By banishing buskers from the vast majority of public streets, Houston has harmed not only Tony’s First Amendment rights but also his livelihood by restricting his ability to practice the trade that he loves,” Mollie Williams, an attorney at Pacific Legal Foundation, argues. The foundation is representing Barilla pro bono. “Because the First Amendment prohibits this kind of censorship, the law should be struck down.”

The Pacific Legal Foundation further argues that Houston can’t require individuals to obtain a permit “before exercising their right to express themselves on public streets.” It adds, “Houston’s permitting requirement does not further any compelling, or even significant government interest. In particular, the Heckler’s Veto provision serves no purpose except for the illegitimate purpose of censoring disfavored speech.”

The lawsuit alleges that Barilla “has been suffering and will continue to suffer substantial and irreparable harm unless Houston’s busking restrictions including its permit requirement are declared unlawful and enjoined by this Court.”

The Pacific Legal Foundation is a national nonprofit legal organization with active cases in 39 states and the District of Columbia. It has won 12 out of 14 cases it has argued before the U.S. Supreme Court.