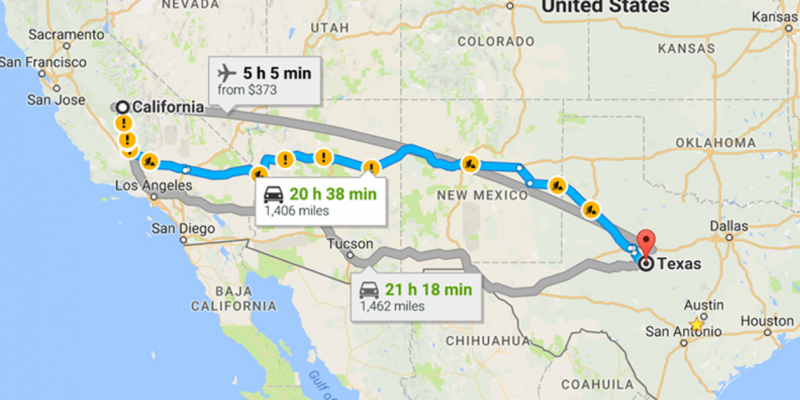 California continues to lead the nation in outmigration, with its former residents choosing Texas as their most popular destination.

A 2019 UC Berkeley poll commissioned by the Los Angeles Times found that half of those surveyed said they have seriously considered (24 percent) or somewhat considered (28 percent) leaving California.

Republicans and conservatives are three times as likely as Democrats and liberals to consider leaving.

California lost 1 million residents to other states from 2007 to 2016, or roughly 2.5 percent of its population. A 2018 report published by the state’s Legislative Analyst Office notes the main reasons Californians are leaving include high housing costs (71 percent), taxes (58 percent) and liberal and left-leaning political culture (46 percent).

A Los Angeles Times exposé on a California “expat” details how a realtor’s business specifically caters to Californians looking to move to Texas.

California’s rate of population increase is close to 1900 levels, according to new data from the California Department of Finance. California led the nation reporting a net domestic migration loss of 203,414 people.

In 2018, an earlier Census report estimated that 201 people left Los Angeles every day.

According to a new survey by Edelman Intelligence, 53 percent of Californians are considering moving out of state, citing its high cost of living. Millennials are more likely to leave the Golden State, as much as 63 percent said they wanted to leave.

In 2018, the Bay Area hit its highest level of outward migration in more than a decade, and still holds the top spot in the country for outmigration. Joint Venture Silicon Valley, which also studied the Bay Area’s outmigration patterns, found that workers are moving to Sacramento, Los Angeles, Seattle, Austin, and Portland for several reasons. But their primary reason was the high cost of housing.

Texas is feeling the growth. Of the 15 fastest-growing cities with more than 50,000 people, seven are in Texas. The three fastest growing cities in the U.S. are Frisco, New Braunfels and Pflugerville.

The state’s largest metro areas, Austin, Dallas, Houston, and San Antonio, have collectively grown by more than 3 million people since 2010.

According to the Census Bureau, San Antonio posted the greatest population gain between July 1, 2016, and July 1, 2017, adding roughly 66 new residents every day.

San Antonio is now the seventh-largest city in the U.S. with more than 1.5 million people – behind one of the oldest cities in the U.S. and former capitol, Philadelphia.

Chuck DeVore, vice president of national initiatives at the Texas Public Policy Foundation, says, economic freedom is one of the reasons individuals, families and businesses are moving to Texas.

“Economic freedom has a large bearing on growth: freedom allows people to thrive,” he says.

Interested in more news from Texas? We've got you covered! See More Texas News
Previous Article KEAUXBE: “I Modeled My Mentality After Him” — Joe Burrow
Next Article The Money-Committee Assignments Are Out In The Louisiana House