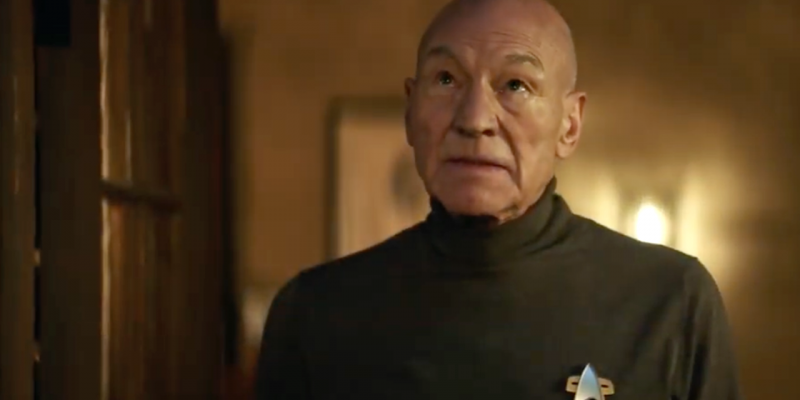 With her Majesty’s assent, the Brexit bill becomes law today, formalizing the process by which the United Kingdom will leave the European Union.

Today also marked the return of a famous Briton to the small screen with the premiere of “Star Trek: Picard” to CBS’s streaming service All Access.

“Picard,” a sequel series in the revered Trek universe taking place roughly 20 years after the events of the movie “Star Trek: Nemesis,” is, in a roundabout way, a product of Brexit. Fears that the show will be yet another showcase of Progressive posturing are now justified.

Sir Patrick Stewart, one of eight executive producers for the show, told NPR he originally did not want to play the famed space-farer Jean-Luc Picard in “a post-Brexit world” — worried intensified national identity would lead to the kind of fear-based politics and violent intimidation of outsiders that apparently has infected the United Federation of Planets in this series. In order to return to the screen, Stewart wanted to be in the captain’s chair. CBS made it so.

“The European Union always made me feel, well, we are heading towards our own Federation of Planets somewhere down the line that will come about,” Stewart told Weekend Edition Sunday via NPR, before taking a few shots at President Donald Trump. “And I am angry, disappointed and embarrassed by our decision to leave the Union.”

Given the social justice preachiness of the previous Trek offering, “Star Trek: Discovery” (due for a third season on All Access, we are told), it comes as no surprise that Producer Alex Kurtzman and other creatives at CBS would take the show in a political direction to put even the choppiest antiwar sermonette spoken by Captain James T. Kirk of the Original Series to shame. Whereas in the original the parables sneaked up on audiences, leaving them to draw their own conclusions, in “Picard’s” first episode, “Remembrance,” the political parallels are painfully obvious from the get-go.

At this point we would issue the familiar “spoilers ahead” alert as a courtesy to fans. Alas, the plot is already quite familiar to anyone who listens to MSNBC-fueled rambles against President Trump or Prime Minister Boris Johnson.

First off there’s a push to exile the Federation’s hardest-working denizens for not being fully human. In the premiere episode of “Picard,” so-called “synthetics” (artificial lifeforms, of which Picard’s long-dead Android science officer Data may be considered) are highly despised by a suspiciously FOX News-like entity named Federation Network News. (Sidenote: even though at one point Star Trek portrayed television-viewing as a somewhat primitive form of entertainment from centuries past, the franchise has gradually introduced the concept of TV to the 24th Century.)

As we learned via the fictitious FNN, several organized Synthetics destroyed a human colony on Mars. The Federation’s reaction to this tragedy lead up to Picard’s resignation from a Starfleet he no longer recognizes as the more altruistic bastion it once was.

And then we have a refugee crisis. Here, it is Romulans who were displaced after an evacuation of the planet Romulus and the dissolution of the Romulan Star Empire. A couple of Romulan refugees are tucked away on Picard’s family chateau in France. The Romulans are generally despised as former foes of the Federation, and those suspicions seem to be confirmed as several are shown to be rebuilding an abandoned Borg cube.

Is this all sounding familiar? To a liberal or a progressive audience, this is a parallel to Trump’s illegal immigration crackdown or refusal to take in Syrian refugees or migrant caravans. Conservatives may as well be aliens looking in on the affairs of this show.

Political rants aside, the show is also stuck in 21st Century mode in several other ways. The CBS era of Star Trek does not dare to dream as boldly as previous incarnations have. Aside from the aforementioned presence of cable network news, recognizable clothing fashions and music tastes are commonplace, phasers emit blasts much like bullet-centric firearms of today would (unlike the beam-style weapons we’re accustomed to in Star Trek lore), and the slang phrases are about the same though Picard remains a stalwart grammarian. There is even what appears to be a rescued pitbull named “Number One.” In “Discovery,” we were introduced to a crew that enjoys rave dancing to Techno remixes of Disco hits like “Staying Alive” (we wish we were kidding).

While “Picard” offers a fresh and intriguing subplot involving the search for who is (more or less) one the forgotten twin daughters of Mr. Data (reprised by Brent Spiner), the show takes us down another familiar avenue. “Picard” combines Mumblecore dialogue and J.J. Abrams-inspired lens-flares and Dutch angles to deliver us a show that moves at the glacial pace of a binge-watching tome for the Netflix generation. Yet we cannot binge it — we have to wait for a new episode each week, and probably will not have answers until the final installments of the 10-episode short season. If the show is anything like “Discovery,” with way too many cooks in the creative kitchen, various plot-lines may never be resolved. And that would be a shame because “Picard” seems to be a much-improved entry into the Star Trek saga handled by more of those who sincerely love the franchise.

Speaking of fan service, the show keeps the continuity going, even hearkening back to several Next Generation-era episodes (though, unlike the 20-year leap forward in “All Good Things,” this elder Picard has no goatee beard).

Like many episodes of Star Trek, “Remembrance” takes us back in time. Unfortunately, it’s not on a time-travel journey, such as to save two humpback whales from the polluted oceans of 1986 earth (the plot from “Star Trek IV: The Voyage Home,” which, come to think of it, was a modestly liberal statement for its time). In this case, instead of taking whales to earth’s future to save us from an alien invader, the show sets out to prevent viewers from destroying themselves by electing perceived fascists like Trump and Johnson. And just wait until “The View’s” Whoopi Goldberg re-joins the crew.

Summary: With nine episodes left in the season, conservative sci-fi fans may relish the nostalgic vibes. Longtime Trekkies will appreciate the new entry into what has become known as the “prime” canon. But be on yellow alert for attacks on immigration reform and intense criticism of the renewal of American exceptionalism and British national identity. Standby to raise shields and set course to rendezvous with The Orville at maximum warp.