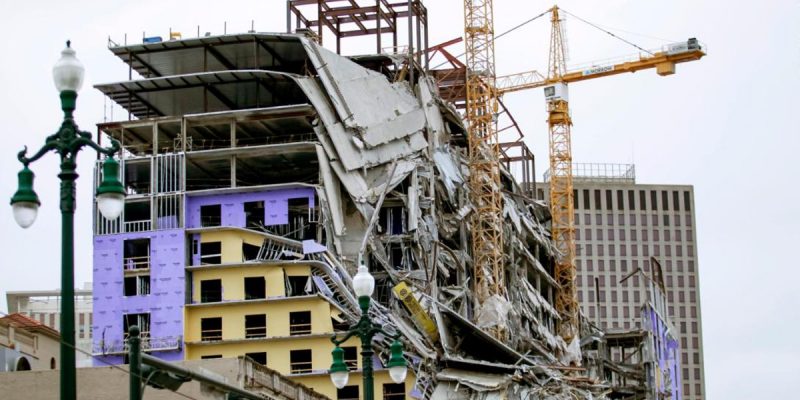 The politicians have all departed for Washington, where the back half of this week is taken up not only with a stupid, pointless and depressing attempt by Adam Schiff and the House Democrats to convict President Trump in an impeachment trial but also with the annual drunk-fest that is D.C. Mardi Gras. You’d think that would make for a slightly more upbeat, slightly less malodorous atmosphere from New Orleans to Shreveport, at least for the next few days.

You’d be wrong because of something happening in New Orleans which presents that city as what President Trump might call a “shithole” – because when he talks about “shitholes” he’s thinking about places where exactly these kinds of things happen.

Specifically, there was this in New Orleans…

It was Quinyon Wimberly’s remains which were exposed when that tarp fell, and his family has been begging for the city to extricate him for six weeks now. Nobody in LaToya Cantrell’s administration is listening; the mayor’s response to that tarp falling and exposing the dead construction worker’s legs for bystanders to see was to replace the tarp yesterday.

Corpses exposed to the open air for weeks at a time in a populated area is something you’d expect to see in Somalia or Haiti or Syria, not New Orleans. But after more than a year of almost comic incompetence and sloth coming from the mayor’s office, it’s not even shocking anymore.

Cantrell would have you believe nothing can be done until the building is fully imploded and the rubble cleared away, which will happen, supposedly, this spring. That’s highly debatable, as asserted in a letter we received from engineers disgusted by the mayor’s callous disregard for those fallen workers…

For almost four months the remains of two construction workers have silently rested in the debris of what once was to be the Hard Rock Hotel on Canal Street in downtown New Orleans. City leaders all along would have us believe that there is no way to recover the remains of the construction workers, one of which became partly exposed when the lightly-secured tarp covering his protruding lower extremities was blown a side by the wind. Imagine being a loved one looking at your deceased grandfather’s legs dangling over Canal Street…

From the beginning the City has ineptly handled the response to this terrible tragedy marching out its fire chief who apparently knows more than the engineers, the demolition crews, and everyone else Latoya wants silenced.  On the morning of the collapse (October 12, 2019) the City’s first responders operated in and around the building which was still settling after collapsing (the cause of the collapse is contained somewhere in the debris). These brave men and women risked their lives attempting to save what we have now learned are three casualties. The same men and women are now chomping-at-the-bit to go back into the destroyed building to attempt to recover the remains of the two construction workers entombed there but their boss, the City and LaToya, refuses to let them.

So why aren’t the city leaders allowing the recovery of the remains? Why are the leaders insistent upon imploding, or blowing up the construction site? What are they trying to hide?

Can the Remains of the Constructions Workers be Recovered?

In a word, YES.  After all, the City is insistent upon imploding the building using carefully placed demolition charges (explosives).  In order properly implode it however, the structure must first be stabilized.  If the structure can be successfully stabilized in order to destroy it, it can certainly be stabilized enough to recover the remains the construction workers.  In other words, the structure has to be fixed so it can be broken.  This begs the questions:  Then why hasn’t the City stabilized it yet?

Does the City have the tools to do it?

Again the answer is YES. We need only to look at similar building collapses to understand that we (us…the City…) have the ability and the means to safely enter and shore-up the building so we can not only recover the remains of the construction workers but also secure valuable and important evidence as to the cause of this terrible tragedy. Then we hopefully will be able to not only prevent the same from ever happening again, but also identify and hold those who are responsible for the tragedy, well, responsible.

How to stabilize the structure.

While collapse operations are indeed dangerous (duh), the risks can be mitigated. How?  Wood…using wood beams to make vertical shoring, lateral shoring and other in-place rapid strengthening techniques to repair the structures’ components.  These tried and true rescue and recovery techniques have been utilized for years, not only nationally and internationally, but locally as well.

Remember Oklahoma City (The Murrah Federal Building was safely shored in about three days following a terrorist bombing attack (take a look at the FBI photographs and you’ll see a remarkable likeness to our Canal Street)); New York City (structures in and around Ground Zero were safely stabilized after the terrorist attacks of 9/11); and New Orleans, Louisiana.  Wait, what? New Orleans has successfully stabilized a structural collapse?  In less than four months?  Say it ain’t so.

Remember the Bright Field?  Yes, the MV Bright Field.  On December 14, 1996, the bulk carrier MV Bright Field crashes into the Riverwalk.  No one dies but dozens were injured.  The ship sustains $1.8 million dollars of damage and the Riverwalk over $15 million. According to Councilman Thomas “It’s almost like a pancake, about a football field long.”  The news reported “What remained standing appeared ready to collapse….”

Then, as now, the first responders rushed in where brave men feared to tread.  Teaming with structural engineers, the structure was stabilized within a week.  There’s a photograph of a “floating” Mercedes in the Riverwalk parking garage attesting to the remarkable efforts of those involved with the structural stabilization efforts.

Since then, the City has received hundreds of thousands of dollars worth of “urban” rescue equipment, and has benefited from untold hours of training received by its responders.  It has an Urban Search and Rescue Team.  So why hasn’t the City sent in their people?  ‘Word around the campfire is that the City doesn’t want to authorize the overtime pay!

Why then does the City want so desperately to implode the building? All one has to do is look on the various Internet video hosting websites and see that large structures are imploded within their own footprint all over the world.  Why does the City need to implode and raise an entire block? Who’s going to benefit from the destruction of a square block on Canal Street? (Wow.  An entire square block on Canal Street to start anew).  Why is the city going to blow up the remains of the construction workers and destroy the evidence that the site has yet to give up?

Why does the City insist its firefighters babysit the collapse site?  Yes, there are two fire trucks and their crews sitting there 24/7 despite no fire or the risk of one.  Isn’t it time the building owner steps up to the plate and provides his own building protection?  Why isn’t the building owner digging thru the rubble himself?  Why hasn’t he hired the right people to do the right thing for the right reasons?

There are certainly other methods available to safely bring down the building all the while protecting the crime scene and most importantly recovering the remains of the two construction workers other than imploding the building.

Just as the rest of the world came to the aid of New Orleans after Katrina we need to look beyond the boundaries of the Parish y’all and seek the help of experts around the world. The City seems hell-bent on destroying everything at the Hard Rock Hotel site just as they did in the destruction of the statues (another commonality in the City’s destructive history is that its fire chief was involved in both).

It looks like no matter how much we scream, our pleas fall on deaf ears.  LaToya – imagine if your loved one lies in that rubble. You know he can brought home. Then, BOOM!  The Hard Rock killed him; now the City erased what was left.  The “City That Care Forgot” has forgotten about these two men.

Interested in more national news? We've got you covered! See More National News
Previous Article SADOW: They’re Scurrying To Flee The Sinking Medicaid Ship
Next Article When a newspaper publishes a cartoon depicting a conservative leader as a lynchman it’s time to say enough is enough