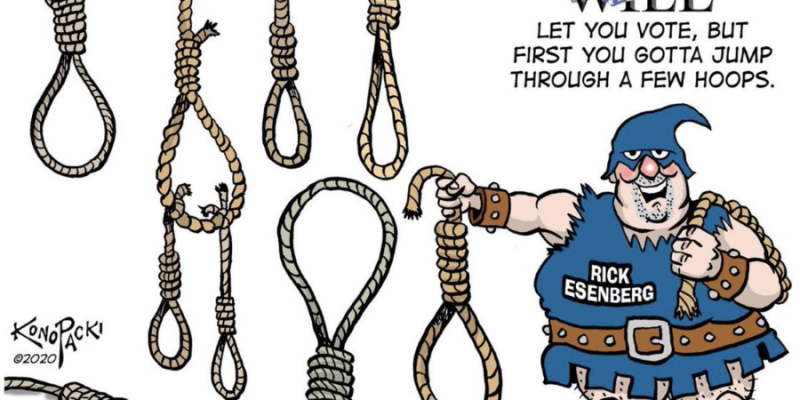 The Madison-based Capital Times published a cartoon depicting the president of the Wisconsin Institute for Law and Liberty (WILL), as a medieval executioner, or someone who lynches voters, which appears to be malicious in intent, and defamation.

WILL complained and the newspaper took down the cartoon after it ran for roughly 5 hours. The Capital Times did not publicly apologize to Esenberg or WILL.

Instead, an editor’s note was published online accompanying the op-ed with which it was originally published, stating, “A cartoon previously published with this column was determined to be in poor taste and has been removed.”

The cartoon and op-ed appear to refer to WILL’s ongoing legal efforts to ensure that registered voters’ addresses are accurate, as required by state law, and that the state follows the law. Neither the cartoon nor the op-ed discuss the facts. The court held the Election Commission in contempt for not following the law, as a result of WILL’s efforts.

This is pretty sleazy, even for a leftwing rag like @CapTimes. Besides the wildly inappropriate and offensive noose/lynching imagery, for which this "paper" should be ashamed, it is simply a FACT that the LAW demands the voter rolls be kept accurate. @WILawLiberty pic.twitter.com/6qnlAEFR3V

The message The Capital Times appears to have intended to communicate is that it’s reasonable, ethical, and accurate to depict a conservative– who is just asking the state to follow the law it enacts– as an executioner.

The matter has to do with verifying addresses of voters– nothing else. Yet a cartoonist, Kono Paki (Mike Konopacki), whom no one nationally knows, is paid and approved by the paper to depict the president of a preeminent think tank this way?

Can you imagine if The Capital Times did this to Barack Obama? Or Joe Biden? Or Bernie Sanders?

“The cartoon is clearly indicating that voters will be lynched by WILL,” James Wigderson at RightWisconsin notes.

Part of Esenberg’s response on Facebook says, “I don’t mind if someone criticizes what we do but it’s best done with civility and an appropriate regard for the facts. The First Amendment allows people to be nasty and ignorant if they want.”

But doesn’t paying someone to create this image go beyond ignorance? The cartoonist knew what he was drawing. He intended to depict a conservative leader, no one else, this way. The editor approved it.

Konopacki intentionally drew and colored an image depicting someone whose opinion he doesn’t like as a lynchman– suggesting the man is a murderer or executioner because he wants accurate voter rolls and state law followed.

This kind of depiction appears to be malicious and defamatory.

The First Amendment doesn’t protect all speech; there are limits.

Somehow adults in the business of regularly exercising their First Amendment Rights by publishing so-called news, don’t appear to care what these rights do and don’t entail. Instead, members of this publication intentionally agreed to characterize someone in a manner that promotes violence–when Esenberg actually opposes the death penalty.

Their defamation is actually a false statement depicting someone as something they are not. It is potentially harmful to his reputation and that of the organization.

Acts like this are no different than those of Nazi posters published before World War II depicting their enemies in the most grotesque fashion. They foster a mindset that it is acceptable to villainize others, spread misinformation and violence. One need only look to the outworkings of Antifa to see this play out in reality.

Members of Antifa carry out everything they say they oppose– even their name exposes their ignorance about fascism and anti-fascism.

While the image is offensive, every conservative should be forewarned that there is a double standard perpetrated by the media that it is acceptable to depict them as something that they are not.

When it comes to promoting violence and defamation, however, we should hold them accountable. It’s time for this to stop.