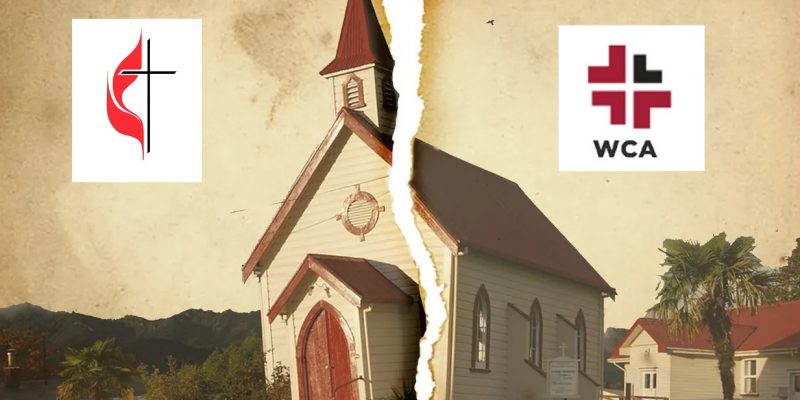 Following last year’s struggle over sexuality issues that have since made the denomination “ungovernable,” Traditionalists in the United Methodist Church (UMC), even though they are clearly now in the driver’s seat, have basically two choices to make during an upcoming General Conference in May.

1) Leave, in a similar manner conservative Anglicans left the Episcopal Church to form the Anglican Church of North America (ACNA) and a few other smaller communions. (Since this fissure in the late 2000s, ACNA has grown exponentially while U.S. Episcopalians have shrunk, though the Episcopalians remain the larger body.)

2) Stay, and show the Progressives the door in the same way Southern Baptists stood firm against liberalism in the mid-’90s. (The Jimmy Carter-style Cooperative Baptists and radical LGBT-friendly Alliance of Baptists set up their own denominational frameworks in wake of this “conservative resurgence” that kept the Southern Baptist Convention from altering its stances on issues regarding gender and biblical interpretation.)

The prevailing Traditionalist consensus in the UMC currently is to leave — amplified last week by a recommendation from the UMC’s college of bishops.

The bishops’ recommendation, titled “Protocol of Reconciliation & Grace through Separation,” sets forth a process whereby Traditionalist churches that oppose gay marriage and who prefer to chart a more Evangelical or conservative course can leave without sacrificing their money, their pension plans, or their property. This document was developed via a mediated negotiation in which both sides were reportedly given equal weight.

(Pause for a minute: with hefty terms like “protocol” and a whole stack of abbreviations, let’s review what’s going on in the UMC, first)

The concept of a friendly separation was first discussed in 2004, but came to a head in 2019. Three factions have since emerged within the UMC: Traditionalists, who hold to a stricter view of Scripture and who uphold the church’s historic definition of marriage and ordination standards, the Centrists, who also claim to have a high view of Scripture, but believe competing teachings on these matters can co-exist in one denomination, and Progressives who, as a matter of “justice,” believe the church must “reconcile” its sexual ethics, it teachings on marriage, and its ordination standards, particularly when it comes to homosexuality and transgenderism.

In 2019, and in short, Traditionalists successfully fought back an effort to allow individual conferences to make up their own minds on gay marriage, homosexual clergy, and “gender identity” issues — but not without the help of a steadily growing tide of African and Filipino delegates. See our coverage here. But they’re tired of fighting.

The Wesleyan Covenant Association (WCA), recently formed as a voice for Traditionalist UMC churches, clergy, and laity, has since laid the groundwork for its own denomination. The WCA produced its own draft book of Doctrine and Discipline to lead the WCA following what seems to be a self-prophesied exodus from the Mother Church.

According to WCA President Keith Boyette, an elder from Virginia, separation is unavoidable:

“Some have justifiably asked, ‘Why are the traditionalists the ones tasked with creating a new Methodist church, while progressives and centrists continue as the post-separation United Methodist Church?’ The answer is simply, ‘Progressives and centrists are not willing to leave the UM Church.’ They will not do so voluntarily and the process of forcing them to leave would require numerous church trials that would distract from the church’s mission, cost hundreds of thousands of dollars, ruin the church’s reputation, and all with no assurance of producing the intended outcome. Progressives and centrists are prepared to remain in the UM Church even if the conflict escalates. Traditionalists could of course dig in their heels and say, ‘We are not leaving either,’ but to what end? It would simply perpetuate a fight that now threatens the health and vitality of local churches and the denomination’s very existence. Thus, if we traditionalists truly want this conflict to end, then we are the ones who have to separate.'”

Not so fast, according to Timothy Tennant, President of Asbury Seminary which has trained a lion’s share of Traditionalist pastors. Tennant said while he would gladly stand with the Traditionalists in a new denomination, the ink is barely dry on what is a proposal from the bishops, not a binding order:

“In case you were wondering, the United Methodist Church has actually not agreed to split, and none of those who met and signed this agreement were authorized to make such a decision. Any possible separation of the UMC cannot be made until May 2020 when the next General Conference of the UMC convenes to consider various petitions, since that body alone has the power to officially represent the denomination. […]

I would prefer that we keep holding our ground as we have done for fifty years. However, I understand the good reasons given by the courageous traditional leaders for why a church separation in 2020 may be necessary. […]”

Chris Ritter, author and a UMC elder from Illinois, points out that Traditionalists and their allies make up for a majority in the global denomination — made evident by 2019’s kibosh on gay marriage. The secret weapon: Africa, which has 5 million-plus members and “may already have a majority of the membership in the UMC and is close to achieving a majority in terms of delegates to General Conference …”

“Some [Africans] don’t want to abandon that. The urgency in Africa is much softer than it is in the U.S. because disobedience is not running rampant there. Many would happy to wait a couple General Conferences and inherit the whole ballgame. Africans are incredibly patient people. One African delegate commented in a private message that the Separation Protocol abandons all the gains that have been won over the past few years. What have we been fighting for if we just walk away now?”

Also nervous, Ritter said, are UMC adherants in other world areas who rely on external support from the U.S. and fear what a divided denomination would mean for them.

From the hip: “There is no new thing under the sun” and Methodist splits have happened before. Many times, actually.

Denominations that have left the mainline American Methodist Church since its founding in the late 1700s following their conscience inlcude Wesleyan Church, the Free Methodist Church, Congregational Methodists, the Church of the Nazarene (more or less), Evangelical Methodist churches, and several others.

You also have the African Methodist Episcopal (AME), AME Zion, and Christian Methodist Episcopal (CME) denominations which were formed by slaves, former slaves, and freemen who wanted equal representation and dignity. Then there was the North-South split during the Civil War, which was healed in 1939 — a few small remaining, conservative factions still exist.

And there are smaller splinters off of the aforementioned denominations. It’s a complex but fascinating tapestry of American religious freedom.

Here’s the takeway: Those who have stood on moral principle or who have favored a stricter interpretation of the Bible and Evangelical practice have have always been on the rump end. As such, when you say “Methodist” in America it is assumed you mean the UMC, not the entire family.

As the rebels, those who have left the mainline Methodist church have sacrificed their church buildings (deeded to their respective conferences, not the local church) and anyone wanting to stay put. In a few notable cases, some founding ministers have even sacrificed their retirement plans in order to stake out a new Methodist denomination.

The difficulty with the prior schisms is that Christians in the mainline Methodist fold tend to be a loyal bunch — as history has shown, the majority of pew-sitters will opt to stay under the same roof they’ve worshiped in for years (sometimes generations) or remain loyal to their denominational identity.

This time will be markedly different, whether the WCA leaves the UMC or takes over the center. With a “gracious exit” being offered to the departing faction, losing a church building won’t be as much of a problem for those potentially leaving the UMC framework.

In all, a separate WCA-led Traditionalist Methodist church will take out only a relatively small chunk of the UMC, as did the ACNA at first. But it will draw away the fastest-growing churches that are focused on winning souls to Jesus and who understand the Evangelical “megachurch” model. Expect the Traditionalist faction to grow if it leaves.

And if the Traditionalists stay, UMC Centrists and Progressives must welcome its new African-led and socially conservative majority — or form their own splinter group to avoid the inevitable “conservative resurgence.”