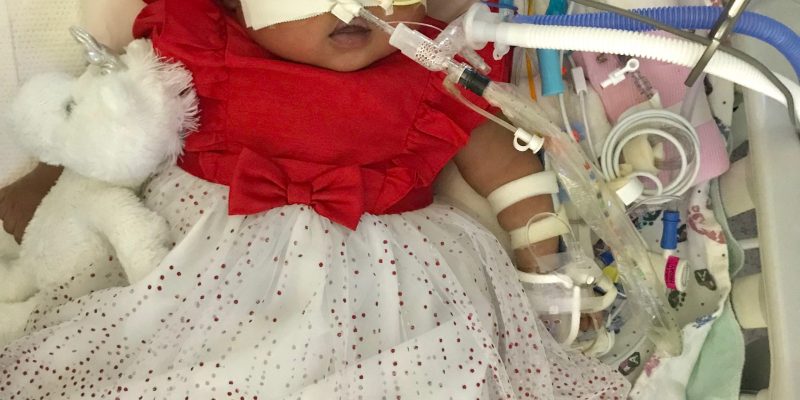 An 11-month-old Texas’ girl’s life hangs in the balance and can be saved if Gov. Greg Abbott steps in, those calling on the governor to do so, say.

Tinslee Lewis of Dallas relies on breathing assistance to live. Her mother, Trinity Lewis, requested Cook Children’s Medical Center (CCMC) give her daughter a tracheotomy last August to be able to transition her to receiving home health care. She also received second and third opinions from doctors about her daughter’s condition, which conflicted with CCMC’s diagnosis.

“Since Cooks has refused to perform a tracheotomy for my daughter, I ask that they uphold their offer of giving emergency privileges to other physicians who can perform a tracheotomy,” Lewis said in a Monday news conference. “That would help transition Tinslee out of the hospital and home on palliative care.

“As her family, we want Tinslee transferred out of Cook Children’s immediately to another facility that will help us transition Tinslee into palliative care with home health support. But my voice and my wishes for my daughter mean nothing under the 10-Day Rule.”

CCMC denied Lewis’s requests and instead gave her a letter Oct. 31 stating it would be removing Tinslee’s ventilator in 10 days, effectively killing her. The hospital says Tinslee is in pain and won’t recover. Due to ongoing litigation, the ventilator has not been removed. A judge ruled Jan. 2 for CCMC to remove it.

The reasoning, according to a Dec. 20 statement from the Texas Hospital Association, is that only the medical professionals at CCMC know what is best.

Dr. Martin Dieter writes, “THA believes the decision to terminate interventions should be left to medical professionals working closely with the patient and their families. Those professionals’ education and experience provide unique insight during these deliberations, and such expertise should be respected… A decision to terminate interventions is a decision to free a patient from pain and suffering deemed unwarranted and, ultimately, to act in the patient’s best interests and well-being.”

Texas Right for Life and the Lewis’s attorney have been fighting the hospital’s decision. After two months of legal rulings, a judge ruled Jan. 2 that CCMC can legally remove her ventilator, ending her life.

On Jan. 3, the State of Texas, Attorney General Ken Paxton, and Gov. Greg Abbott filed an amicus curiae letter in the Second Court of Appeals in support of the Lewis family, and the legal battle continues.

But this legal wrangling could have possibly been avoided – and Tinslee’s life can still can be saved by moving her to another facility – if the governor steps in, advocates for Tinslee argue.

In December, 16 state legislators sent a letter to the governor (two more have since joined) requesting he call a special session to amend or repeal the state statute.

Abbott did not respond to the legislators’ request, nor did his office respond to more than one request for comment from The Center Square.

Prior to Tinslee’s case, more than 100 people traveled to Austin in April to express support for families testifying before a state Senate committee addressing the law. The state Senate passed a measure to amend it, SB2089, increasing the 10-day notice to take a patient off of life saving treatment to 45 days.

The House Committee on Calendars didn’t schedule an accompanying bill, House Bill 3158, to be heard or voted on, despite SB2089 passing in the Senate. Because companion bills are required for the full legislative body to vote, the Senate measure, and any chances of amending the law, went nowhere.

At issue is Section 166.046 of the Texas Health and Safety Code, implemented under former Texas Gov. George W. Bush in 1999 and heavily backed by two of the most powerful lobbying groups in Austin, the Texas Hospital Association and the Texas Medical Association.

The statute allows physicians who decide to no longer offer treatment, with an ethics or medical committee affirming the decision, to discontinue providing life-sustaining treatment for a patient unless they are mandated by a court to do so. The law stipulates that they provide 10 days notice in writing before terminating care, which could include removing a patient’s breathing or feeding tubes or dialysis. The law also protects the medical facility from being sued for malpractice.

The bill went into effect nine years into Shiavo’s case still being heard in Florida courts. From 1990 to 2005, the Schiavo family endured medical and legal battles to determine who had the right, and when, to remove a feeding tube keeping Terri alive.

In 2003, former Florida Gov. Jeb Bush called a special state Legislative Session and signed Terri’s Law, which gave the governor the authority to intervene. However, the Sixth Circuit Court and the Florida Supreme Court both ruled the law was unconstitutional.

Then Congress stepped in and enacted Terri’s Law II in 2005, which authorized a federal court review, among other provisions. After several more legal rulings, Terri’s feeding tube was removed on March 15, 2005, and she died 14 days later.

The Texas law is “unprecedented, unconstitutional, and unethical,” Texas Right to Life’s Legislative Director John Seago said. The group is a patient advocate to the Lewis family in court. It has advocated for numerous patients since 1999, including the high-profile cases of Carolyn Jones who died in 2019, Chris Dunn in 2015, and Andrea Clark in 2006, because of the law.

AG Ken Paxton said in a statement the state statute “fails to require that physicians provide an explanation of why they refused life-sustaining treatment and provide the patient’s family with adequate notice and opportunity to argue their position prior to the committee reaching a decision, effectively allowing the government to deny an individual’s right to his or her own life and to do so without due process.”

Paxton’s office said it will “continue to use all necessary resources to ensure that she [Tinslee] will not be deprived of her right to live.”

Had the legislature amended the 1999 statute, Texas law could have been brought in line with 11 other states’ legal frameworks, Texas Right to Life told The Center Square. These laws allow more than 10 days for a family to find alternative arrangements for their loved ones when a hospital decides to end the patient’s life.

“This is not the only case of non-responsiveness from pro-life/pro-family Gov. Abbott,” Joann Fleming, executive director of Grassroots America – We the People, told The Center Square. “Legislators and grassroots leaders have asked for a special session to protect parental rights” on this and other issues before and also received no response.

“Protecting human life, parental rights and underage children should be a top priority,” Fleming said. “Surely, Gov. Abbott must see that these life-altering issues cannot and should not wait until the legislature convenes in 2021.”