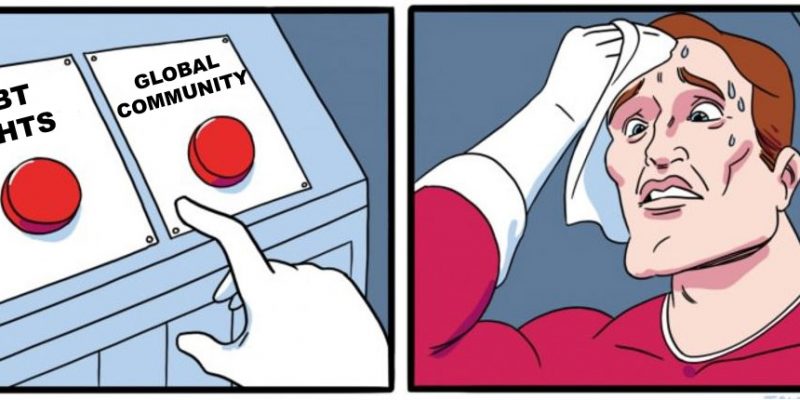 Rather than face the fact that the denomination is shrinking in the United States but growing in foreign countries, liberals are now blaming “colonialism” for their failure to change the church’s stance on sexuality.

Out of 12.6 million members nearly half are members from outside the United States — a great share of whom did not favor changing the sexuality standards of the denomination.

(For a great example of this opposition, see remarks from Dr. Jerry P. Kulah, a seminary dean from Liberia, who was a delegate to the UMC convention over the weekend.)

Here’s what happened, in a nutshell (and without getting into the weeds of church politics):

The General Conference of the United Methodist Church, the only body that can speak for the denomination as a whole, gathered in St. Louis and took a final vote on Tuesday. One plan before the conference was to let each congregation do its thing in regard to LGBT causes (the “One Church Plan”), another sought to have three sub-denominations (each with its own sexuality standards — the “Connectional Conference Plan”) and another plan (the “Modified Traditional Plan”) was intended to add teeth to the existing ban on gay clergy and related topics.

Over the last few days, United Methodist delegates from Africa, Europe, and the Philippines made for a significant voting bloc along with U.S. conservatives — one which turned the tide of progressivism in what was once America’s largest denomination.

The Modified Traditional Plan passed by around 53 percent (449 to 374 delegate votes). Clergy now have until 2021 to affirm the church’s stance on traditional marriage, or they will be removed. The plan may still be subject to judicial hearings within the denomination.

John Lomperis, UMC point man for the conservative religion thinktank Institute for Religion and Democracy, noted out in 2018 that there are now more United Methodists in central Africa (with four bishops) than the USA’s Western, North Central. and Northeastern districts combined (under 23 bishops).

For decades, like many denominations in the Protestant Mainline, the United Methodist Church had been working to become “a truly global” church organization. They were already not fond of nationalism according to the Book of Discipline (the UMC’s primary ruling document), which reads under a section concerning which nations should be allowed to join the United Nations “We reaffirm our historic concern for the world as our parish and seek for all persons and peoples full and equal membership in a truly world community.”

The Institute for Religion and Democracy’s President Mark Tooley said in a press statement: “This General Conference is further proof that the center of gravity in the United Methodist Church is shifting from the United States and to the vibrant, growing Christian faith of the Global South. The United Methodist Church is no longer rooted in a declining liberal U.S. mainline Protestant tradition and is instead reflecting its identity as a global church.”

Meanwhile, those on the other side of the spectrum are still blaming colonialism. An organizer for the Pro-LGBT Reconciling Ministries Network, Rev. Izzy Alvaran, said “I see the tentacles of colonialism in the Traditionalist Plan … The rigid standards of these proposals force us to stray from our respective cultures’ relational ways to live with those who differ from us. This plan — traditionally colonialist – imposes exclusion and exile.”

Alvaran, who considers himself a refuge, blamed colonialism in native Philippines for conservative values among his fellow Filipinos.

Whether or not colonialism is to blame or if the push for gay rights is peculiar to the more industrialized parts of the world, it appears years of expanding into diverse areas of the world has made the United Methodist Church more socially conservative. Expect this trend to continue.