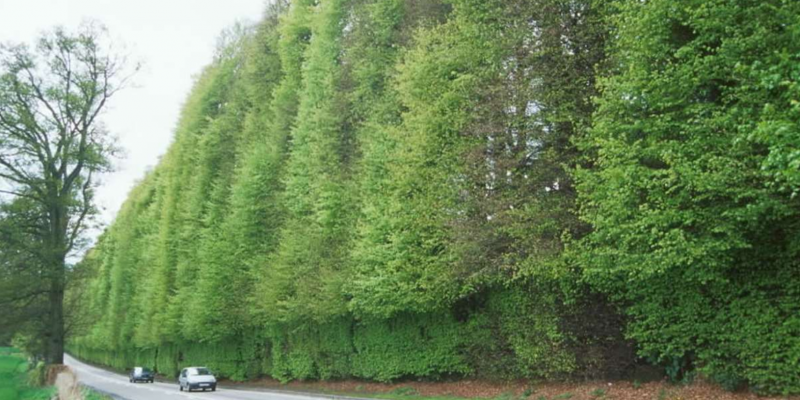 The word “Hedge” is derived from the Old English, German (Hecke) and Dutch (haag), meaning “enclosure.”  Historically, hedges were constructed for protection; to prevent soil erosion, provide shelter from the wind, shield crops from livestock, separate fields, demarcate land ownership, and serve as wall fortifications. Consecutively entwining shrubs and trees creates a hedgerow, or a formidable wall, which can last for centuries.

The highest hedge of its kind in the world, the Meikleour Beech Hedge, is rooted in Scottish soil that was once soaked by the blood of Protestants and Catholics fighting over crown and church.

By 1688, The Glorious Revolution had permanently ended Catholic rule in what would not yet be a United Kingdom of Great Britain, Scotland, Northern Ireland and Wales. (This did not happen until 1801). The revolution led to the overthrow of the Catholic Stuart King James II and VII, and any suspected opponents, like those of Glencoe, Scotland, were massacred. New laws abolished absolute rule of a monarch, prohibited Catholics from voting or holding public office, and barred monarchs from Catholic worship or marriage.

In the 1740s, the Jacobites attempted five times to restore the Stuart monarchy, believing in the divine right of kings. Their fifth and final attempt failed when Bonnie Prince Charlie, the exiled grandson of the King James II and VII, tried to overthrow King George II. In 1746, the Jacobites and their cause were crushed in the Battle of Culloden. Within forty minutes, over 1,000 Jacobites were killed. The Duke of Cumberland and son of King George II, known as the “Butcher,” ordered the shooting of the wounded and the burning of prisoners, alive in pits. Over the next several months, he and his troops hunted and killed 1,000 more Jacobites.

Six months prior to Culloden, Jacobite sympathizers Robert Murray Nairne and his beloved wife Jean Mercer, heiress of Aldie, planted a beech hedgerow along 600 yards of their Meikleour estate in Perthshire, Scotland. While working on the hedge, Nairne and his groundsmen learned of Prince Charlie’s arrival in Scotland. They and others from nearby glens rallied to join him. Nairne and his men never returned; their bodies sank in the thick mud and bloody mire of Drummossie Muir.

Completely devastated by her husband’s death, Jean required all of her heirs or subsequent owners of Meikleour to allow the hedge to grow unimpeded. She envisioned the hedge reaching to the heights of heaven to be near her husband.

The Stuarts and Catholics never regained power. Over the next 150 years the British government systematically eradicated Gaelic culture and clan society. Clan chiefs were forcefully disarmed and forbidden to wear clan tartan and kilts or play bagpipes. Worse still, the Highland Clearances legalized the removal of hundreds of thousands of people from land that their families had inhabited for many, many generations. The Clearances caused incalculable destruction of families and livelihoods, leaving many impoverished, stricken with disease, or dead.

Despite the ongoing changes in Scotland, Jean’s wish was kept. The Meikleour Beech Hedge continued to grow, and nearly 275 years later it remains the largest hedge in the world.

Many gaze at its rich foliage, which changes color in different light and seasons, and are awestruck by its sheer size. Perhaps though, onlookers sense something more profound—a soft whisper rustling among the leaves testifying to a boundless love that surpasses death.

This article was first published by Hedgerow at Patheos.