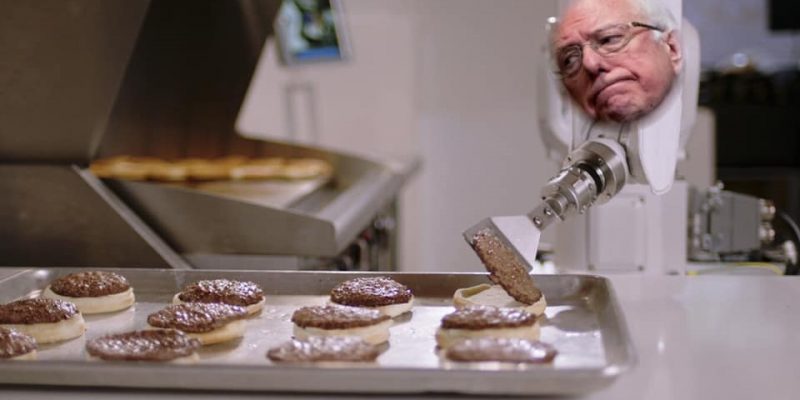 Democratic candidates for Presidents are banking on a treasure trove of voters from the Lone Star State to carry them over on Super Tuesday.

They must also think Texans are made of oil and gas money. All of them favor a $15 per hour minimum wage, except for Steyer who has called for a $22 base pay.

But what happens when they get their way? Since California’s $12 per hour minimum wage went into effect this year, the free market continues doing what it does best: finding the more cost-effective way to deliver goods and services than before.

While kiosks have replaced many counter workers at McDonald’s restaurants, and burger-making machines are not entirely new, one innovation from California may soon coming to a short-order kitchen near you.

Meet Flippy: a sensor-laden robot arm that can, as its name suggests, flip burgers, dip fry baskets, brown meats with laser-precise timing, and other behind-the-counter tasks that were once the domain of homosapiens. It never calls in sick or joins in collective bargaining. And it may only cost $3 per hour to run (see below).

Though it made a debut in 2017, Flippy has since been introduced to Walmart delis as a pilot program, a CaliBurger franchise in Pasadena, and even Dodger Stadium frying up chicken strips and tater tots. It was reported that Flippy flawlessly churned out 17,000 lbs. of fried food during the 2018 World Series, able to fry eight baskets simultaneously.

In 2020, Flippy’s manufacturer, Miso Robotics, has eliminated the need for floor or counter space for the robotic arm by introducing an under-the-hood variety. The new model hangs just above a fry station.

According to TechCrunch, the advent of the robotic line cook has been slow and anything but steady:

Miso’s move comes even as other startups attempting to automate the preparation of everything from pizza to burgers are getting burned. Zume, the formerly high-flying would-be robotic pizza maker and packaging company, recently had to lay off a chunk of its workforce, and Creator, the automated burger prep restaurant, is still operating from a single location in San Francisco two years after its launch. …

By contrast, Flippy is now being used in both Dodger Stadium and the Arizona Diamondbacks’ Chase Stadium, along with its installation in restaurants backed by Miso Robotics investor Cali Group.

But get this: restaurants may be able to install a Flippy for free should cooks become too pricey in the near future.

The ultimate goal is to offer the robot for free and charge restaurants a fee for the use of the robot … The robotics-as-a-service model is already popular in the logistics industry, where warehouses are improving margins through increased automation, but robots have yet to make significant enough inroads into the restaurant business to make the business model work … so far.

From the hip: It’s not just the increasing cost of wages in California and the runaway costs of employee benefits to blame. The roaring economy under President Donald Trump has spurred somewhat of a labor crisis in the service industry with unemployment at record lows. As such, employee turnover reached a shocking 100% in fast food jobs.

Add in a minimum wage boost on the federal level and we may as well get used to robots making our food. Andrew Yang was right about his prediction, though his economics have much to be desired. Watch the video below to catch a glimpse behind the counter of the near future.