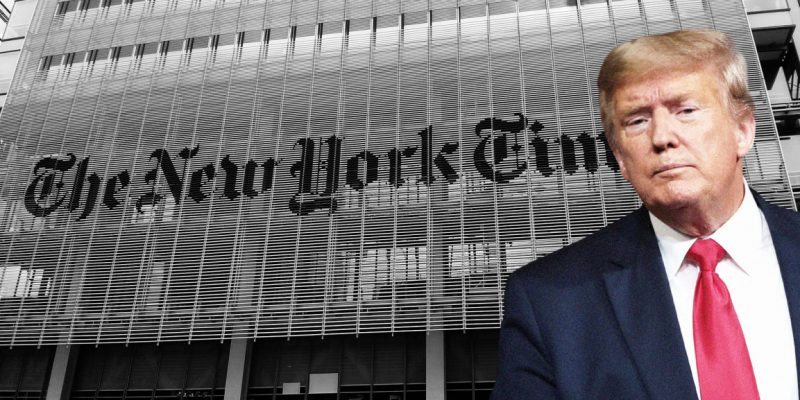 Donald J. Trump for President, Inc. filed a lawsuit against The New York Times on Tuesday, charging the media outlet with libel and claiming that it falsely reported rumors as facts relating to the Russian collusion hoax.

The Trump campaign claims that an op-ed featured in the newspaper falsely reported that Donald Trump conspired with Russia to interfere in the 2016 election.

The lawsuit alleges that The New York Times maintains an “extreme bias against and animosity toward” the president’s re-election campaign and conducted itself “with reckless disregard for the truth”.

The op-ed in question was entitled “The Real Trump-Russia Quid Pro Quo” and purported to have knowledge of a deal being made between the Trump campaign and Russian President Vladimir Putin’s inner circle.

The lawsuit further alleges that The New York Times and the author in question knowingly misled readers as the op-ed was released just days after Attorney General Bill Barr published his summary of the Mueller Report. A Times spokesperson said the opinion piece is protected under free speech.

The suit seeks an unnamed compensation amount for the costs incurred, and continuing to be incurred, by the Trump campaign for “corrective advertisements” aimed at undoing the damage done by the negative and misleading coverage.

Speaking to reporters on the matter, President Trump said that The New York Times article in question was, “more than an opinion piece” and added that the Times, “did a very bad thing and there will be more coming.”

The publication is under fire again for an article published just yesterday entitled, “Let’s Call It The Trumpvirus” in which they, unbelievably, insinuate that the Coronavirus outbreak is partially the fault of President Trump.

President Trump tried calming fears yesterday when he announced at a press briefing that Vice President Mike Pence will head up the White House’s Coronavirus Task Force. He reassured Americans that the administration has taken every precaution possible adding that it is, “totally ready, willing, and able” to protect Americans.